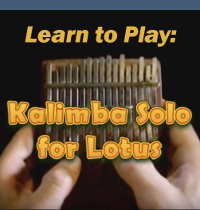 Learn to play the “Kalimba Solo for Lotus”

Tablature and Staff Notation for the Entire Song Click to go to the Lotus Solo product page   Thousands of people have been wanting to learn to play SaReGaMa’s “Kalimba Solo for Lotus” on the Lotus Karimba, and if you are one of those people, I’ve got good news for you. In 2009, New Age musician SaReGaMa celebrated the birth of his daughter, Lotus.  At night he would play her to sleep with improvisations on his Hugh Tracey Karimba.  The Karimba had started out its life in a traditional African tuning, but by the time it got to SaReGaMa it had fallen out of its original tuning, and he began to invent new tunings.