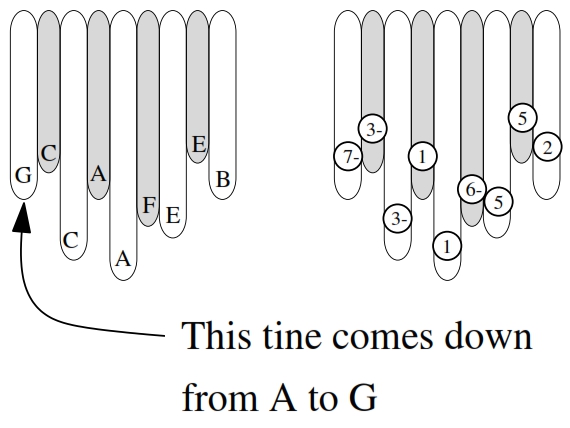 Modifying one note won’t totally transform the sansula, but it will alter, and in this case, extend the musical palette available to the instrument. And if you are going to take the plunge and experiment with alternative tunings for the first time, you should start with something easy. This tuning only requires retuning one tine by a whole step.  It is also easy to get back to the original tuning, though I don’t think you’d want to – I myself prefer to have that G than to have the double A’s in the standard tuning.

The standard sansula tuning has three A tines: the lowest tine is an A, and there are two left side tines that are both tuned to the same A, an octave above the low note.

It is not uncommon for kalimbas to have two tines tuned to the exact same note, but generally those two tines are located on opposite sides of the kalimba, which permits you to trill, or quickly alternate between the left and right versions of that note.  However, in the standard sansula tuning, the two high A tines are both on the left side of the kalimba – that is, you cannot really trill them – unless you cross over with your right thumb to play one of them.

But there is a reason for the doubling of the A – especially for newbies. If, perchance, you were randomly strumming the tines, not knowing what you were doing, you would just randomly play a lot of A notes.  As A is the root note, loading the instrument with several A notes means that the root is automatically emphasized, making it seem like you know what you are doing even if you don’t.

But, what if you do know what you are doing?  Then here is a trick for you (and retuning one of the A’s to G has a lot to do with it).

If you know what you are doing, you know how to emphasize the root note (the A) when playing, or perhaps when not to play the A to build up tension.  If you know a bit about music, you may automatically do those things.  So you don’t need that extra A to do them, which frees up the A to be a different note, one that you don’t have and could yet increase the capabilities of the tuning.  The most logical note to retune that A to is G, which is otherwise not on the sansula.

To retune the A to the G, first see tip number 6 and read up on how to tune the sansula.  When you are confident, you probably want to loosen just the left screw by half a turn, pull out the far left tine a few millimeters, and check the tuning.  Adjust and recheck.  When you get close, retighten the one screw, and again check and readjust the tuning.

How is G used?  It is a passing note between A and F.  I find that it greatly adds to the musicality of the sansula’s standard tuning.  You probably won’t want to go back.

Mark Holdaway has been playing kalimba for over 30 years. He invented his kalimba tablature in 2004, and has been writing books and instructional materials for kalimba ever since. His business, Kalimba Magic, is based on the simple proposition that the kalimba is a real musical instrument capable of greatness. Mark's kalimba books are a down payment on this proposition.
PrevPreviousTIP: Exploring Sansula Tunings – p6 – How to Retune?
NextTIP: Exploring Sansula Tunings – p8 – The Beautiful E TuningNext