Free Tablature for “Coventry Carol” from the Freygish Download 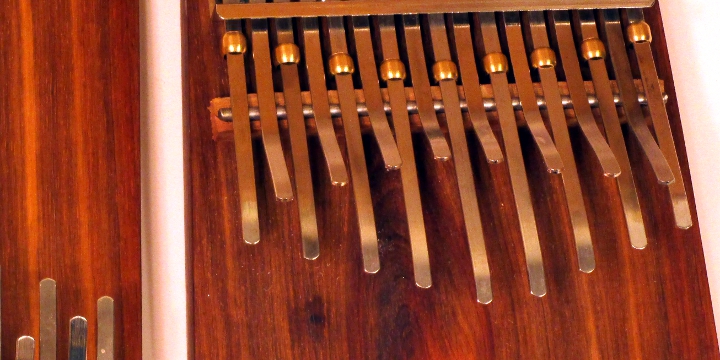 “Coventry Carol” is a 16th century English Christmas Carol.  It has the haunting feel that some old English music evokes, and as a youth I was charmed by it and used to long to play music such as this song.

This old Christmas carol and the Freygish-tuned karimba were made for each other – both are in the exotic-sounding harmonic minor scale.  This and many other great songs are part of the Freygish Download, and you can get the tablature for “Coventry Carol” free in this article. Let’s talk about how this song works.

The significant note in the harmonic minor scale is the major 7th, and on this C harmonic minor Freygish karimba, that note is B.  The B can be heard in the third note (or chord) of the melody in “Coventry Carol.”  The melody notes are the highest notes of the chords (in this case).  The melody in those first four chords goes C C B C.  That sound, as represented in the first four chords, is the essence of the harmonic minor scale.  The B at the top of the third chord of the piece is not a minor note, but it gives the KICK that makes us want to go back to C, which seems to make the C minor even more minor.  Listen over and over to the song, and set it firmly in your mind that “this is what harmonic minor sounds like.” (Also please watch/listen to the Freygish karimba YouTube video in the Related Articles list below. It will help reinforce that lovely exotic sound.)

“Coventry Carol” is in a minor key all the way through and normally ends with a surprise major 3rd chord.  This unexpected major 3rd is called a “Picardy 3rd.” Changing the key (from minor to major) this way is not possible on the Freygish kalimba, so my arrangement of “Coventry Carol” just leaves that Picardy 3rd out entirely.  In order to have that major chord at the end, you would have to play this song on a chromatic kalimba.  The term “chromatic” describes an instrument that contains all the flats and sharps in a scale, something that diatonic instruments do not have. 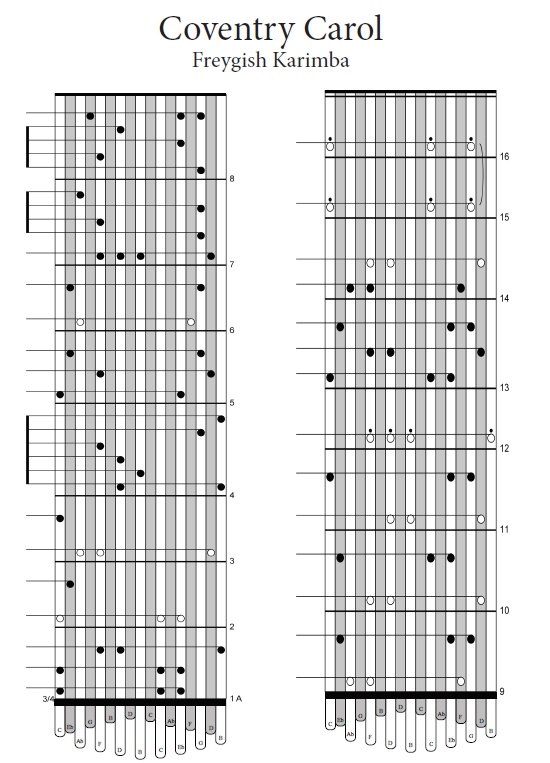 “Coventry Carol” is a perfect song for the Freygish Karimba. Click to download  a PDF of the above tablature.

From the back cover of the Freygish karimba download: “The Freygish-tuned karimba plays delightful songs, mostly in C harmonic minor.  This instrument brings alive baroque melodies and harmonies, romantic music box waltzes, fiery Middle-Eastern music, and hot Latino cumbia – nostalgic, sensual, mysterious and sweet.  This karimba plays unique music that is not played by any other.”

Mark Holdaway has been playing kalimba for over 30 years. He invented his kalimba tablature in 2004, and has been writing books and instructional materials for kalimba ever since. His business, Kalimba Magic, is based on the simple proposition that the kalimba is a real musical instrument capable of greatness. Mark's kalimba books are a down payment on this proposition.
PrevPreviousHave a Magical Experience Playing Kalimba!
NextSongs for The Alto Kalimba – “Zambezi”Next