Songs for The Alto Kalimba – “Zambezi”

Several people have requested the tablature for Tinashe’s popular and touching song “Zambezi,” which has been around on YouTube for a while. It is a great song for the kalimba, as it is pretty much just a four-measure riff that is repeated through the song with minimal changes.  It is not difficult and even novice players can learn to play this song in about 10 or 15 minutes.

“Zambezi” is performed by Tinashe on solo Alto kalimba and voice, and we also have a link to him performing it with a four-piece band. There is not much information available about him to be found on the Internet.  But be aware that there is another Tinashe – a female African American artist, who is more famous than the Tinashe of “Zambezi” fame; she doesn’t play the kalimba – so try not to confuse the two.

Download the free tablature and learn this simple, pretty song! 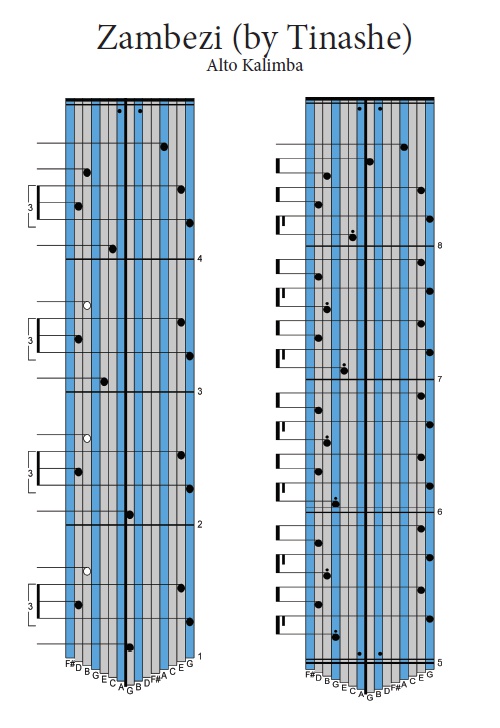 The first four measures are played “out of time” or “out of tempo” – meaning on any particular note, but especially the two longer notes in each measure, you can sit on the note for as long as you feel like before you move on to the next note.  Tinashe uses it nicely to introduce the song.

Playing out of tempo is perfect for the developing kalimba player. It is even perfect for an experienced kalimba player who is playing a new song they are not so familiar with. You can play as slowly as you want, and you can take a long time after you play one phrase and gather your mind to approach the next phrase.

If you are confused by the triplets in measures 1-4 (the three grouped eighth notes with the “3” written to the left), or the “dotted quarter note / sixteenth note” figure in measures 5-9, visit the “Learn How to Read Tablature – 2” link near the bottom of this page.

The basic unit of music in this tablature is only four notes – to start, just play the first four notes of measure 1 (same as measure 5, but with different timing).

Next, look at measure 5. You can see that the second half of the measure is almost like the first half – only one note of the four are different (the starting “blue” G is replaced by the B tine just to the left).

After you can play all eight notes of measure 5, you will notice measure 6 is identical to measure 5, and measure 7 has seven out of eight notes the same – only the first note is different. Measure 8 is the same sort of thing, with the first note being different, but the end has a “turnaround”. A turnaround is music that is explicitly different that gives the message to both listeners and fellow musicians that something is about to happen. Sometimes that thing that is about to happen is a change to a new chord or a new section in the music. In this case, the turnaround signals that we are moving back to the beginning. It is like a label we put on the music that we are near the end of the phrase, and when we hear this change, we feel it and know it, and then we don’t have to count the measures.

The music presented in measures 5-8 illustrates an essential technique for building music on the kalimba – a constant riff with a single bass note (i.e., lower than the other notes) that changes on the first of each measure. That first note, or bass note, defines the chord progression.

By the way, after the refrain when Tinashe sings “You’re the one,” the sequence of the bass notes at the start of each measure changes to E, G, C, C – a detail that is not in the tablature, but one that is a simple challenge for you to implement. That change serves a purpose similar to the turnaround at the end of each phrase – it signals that something else has happened – namely, the verse and refrain have ended and now we are getting ready to go back and do it again.

So, this is a good song to learn – both because it is a nice catchy song that you will enjoy playing, and also because it is an excellent prototype for kalimba songs that you yourself might create in the future.

Tinashe entitled his video (below) as “Mbira version of ‘Zambezi,’ ” but he is clearly playing it on a Hugh Tracey Alto kalimba and not an mbira. The word “mbira” here is being used as a generic term for any thumb piano; and we hear hints in the song’s words that make us think of Africa, so we may see this as Tinashe’s artistic intention to paint us a sound-picture of an African story and song on a traditional African instrument.

Mark Holdaway has been playing kalimba for over 30 years. He invented his kalimba tablature in 2004, and has been writing books and instructional materials for kalimba ever since. His business, Kalimba Magic, is based on the simple proposition that the kalimba is a real musical instrument capable of greatness. Mark's kalimba books are a down payment on this proposition.
PrevPreviousSongs for the Freygish Karimba – “Coventry Carol”
NextSongs for the 8-Note Kalimba – “Away in a Manger”Next