You too can play “I Can’t Help Falling in Love With You”!

When I get 10 requests for something, I know it’s time to sit up and listen. Total strangers to Kalimba Magic were finding their way to my eShop and sending requests for some strange new kalimba setup that was suddenly insanely popular on YouTube.

The kalimba on the Youtube video was not in its factory setting; it was a 17-note kalimba that had been modified by the player.  I could put the Hugh Tracey 17-note Treble Kalimba in that tuning. So indeed, I could fulfill those new requests, and I set about doing just that. And thus was born the Mbira Style Treble Kalimba.

Why do I call this the Mbira Style Treble Kalimba? Because it looks like an mbira without its lower course of notes, and it’s made from a Hugh Tracey 17-note Treble kalimba. I would much rather name it after the guy on YouTube who made this tuning popular, but he is not interested in playing ball with anyone except Amazon. Oh well, both our loss.

This note layout is actually the same as an instrument I sold briefly, 6 years ago that I called the Kwe Pomusoro Mbira – which is a style of mbira playing that basically means “without the lowest notes.” This time around I wanted it to have a different name, so I call it the Mbira Style Treble Kalimba.

The tablature to the right is the music for “I Can’t Help Falling in Love WIth You,” the song everyone seems to want to play on this new style kalimba.

As I sank my teeth into learning to play this instrument, I came to love it. I especially love playing mbira music and other African music on it.

You will note that many tines are painted on this kalimba. The colored tines represent the notes in the C Major triad: C – E – G. The three painted tines on the left that have just one unpainted tine in between are all matched, an octave higher, in the three painted tines on the right. This paint scheme really helps playing mbira music, as the C triad features heavily. It also helps matching the right and left tines together (an octave apart). And it makes transferring notes from the instructional download to the kalimba very easy.

I really enjoy the mbira-style treble kalimba to play on a walk or to take along in the car. It plays the magical music of a mbira dzavadzimu which is bigger and bulkier and hard to walk with. My MBTK fills the bill and is an easy travel companion.

Oh – and if you have the Alto Kalimba in standard G major tuning, click on the image below to download the Alto tablature. 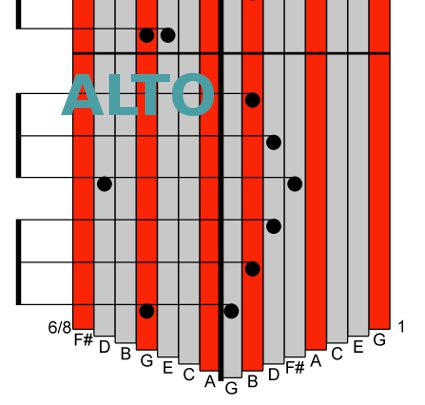 If you have the Treble Kalimba in standard G major tuning, click on the image below to download the Treble tablature. 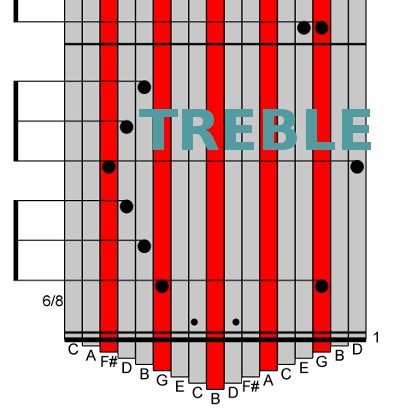 Note how the notes for the arpeggiated chord above (the notes that make a “v” shape in measure 1) fall on the right side of the Alto, but the left side of the Treble. This is because the Treble doesn’t have low enough notes to play what the Alto played, so I shifted the notes up an octave, which shifts the notes both higher on the instrument, and over to the opposite side.

The video below demonstrates the MBTK in action.

Mark Holdaway has been playing kalimba for over 30 years. He invented his kalimba tablature in 2004, and has been writing books and instructional materials for kalimba ever since. His business, Kalimba Magic, is based on the simple proposition that the kalimba is a real musical instrument capable of greatness. Mark's kalimba books are a down payment on this proposition.
PrevPreviousRun the balance between Wildness and Precision
NextSplit Brain – Can your brain do two things at once?Next