Home > Blog > Item > Split Brain – Can your brain do two things at once?

Split Brain – Can your brain do two things at once?

Yes, but for most of us it takes some practice

Two people on one kalimba

According to general understanding, we can only really concentrate on one thing at a time. But I know that this isn’t actually true.

There are two of you (at least!) inside your head – a left hemisphere and a right hemisphere. Most of the time these two sub-brains work together. But our two thumbs are quite capable of doing quite different things from one another.  Probably the most interesting music on kalimba happens when the two thumbs are working independently, but in a coordinated manner.

Before we get to the kalimba lesson on this very important concept, though, I want you to consider the two halves of our brain, and how they work together. As you know, the brain has a left hemisphere and a right hemisphere. A good amount of specialization occurs between the two hemispheres: one hemisphere is more about language and sequential understanding ; the other hemisphere is more about intuition and feelings and associations. Between the two hemispheres runs a rather skimpy USB sort of connection called the corpus collosum – a bundle of nerves that connects the right and left hemispheres. Though different from each other, each of the two hemispheres is a fully formed brain. I happen to know someone with only one hemisphere, and she is a complete person, operating with half a brain, living her life with joy and integrity and dreams and love.

When you are a beginning kalimba player, I think the note production tends to be a very linear, sequential thing. But as you play kalimba more and more, something else will happen – you’ll develop almost a stereoscopic approach to the instrument. Let’s just say that at that point, the music can really jump off the two-dimensional page and stand up and dance! This is my interpretation of what’s going on:

To illustrate this in a very concrete way, try this exercise: Together with someone else, play a single kalimba. Have a friend put their left hand on the left side of the kalimba, while you put your right hand on the right side of the kalimba. One of you starts, and the other jumps in. There are many ways to do this, but aim for some sort of interlocking pattern, where there is a regular back-and-forth between the two hands. Whatever happens, pay attention! Your friend should learn something from you about kalimba, as well as something about you and how you do things. You will similarly learn something from your friend about playing the kalimba, as well as something about your friend and how they go about things. Your friend’s role is that of one side of a brain, and your role here is that of the other side of a brain. Both are independent, but coordinating, interacting and making music together.

Our two hemispheres normally can align with each other and successfully negotiate life. We have trained ourselves to do tasks in which the two sides work together as a whole – think of swinging a baseball bat or knitting a blanket, very complex activities in terms of  how the brain functions. Remarkably, there are people who have undergone an operation (the treatment of last resort for severe epilepsy), called a corpus callosotomy, where the nerves connecting the left and right hemispheres have been severed, and some experience extraordinary phenomena. From the Wikipedia article on Split Brain:

“After the right and left brain are separated, each hemisphere will have its own separate perception, concepts, and impulses to act. Having two ‘brains’ in one body can create some interesting dilemmas. When one split-brain patient dressed himself, he sometimes pulled his pants up with one hand (that side of his brain wanted to get dressed) and down with the other (this side didn’t). Also, once he grabbed his wife with his left hand and shook her violently, but his right hand came to her aid and grabbed the aggressive left hand. Such conflicts are actually rare. Usually, if a conflict arises, one hemisphere will override the other.”

Everyone (almost) has two hemispheres, totally capable of different ideas, different emotions, even different actions. We become trained and accustomed to using the two sides simultaneously, and they work together as a whole. But left and right are very capable each on their own, and they specialize and do different tasks.

And so it is with the kalimba.  The lesson that follows will help you begin to see this in action. It is a pattern that is an uneven four strokes on the left side against an even three strokes on the right side – called an “uneven 4 against 3” for short.

The left thumb plays a rhythm that sounds like a heart beating: “thump thump — thump thump … ”  Meanwhile, the right thumb is playing a steady pattern: “hit – hit – hit – hit – hit – hit.”  It is actually very simple to play the left pattern by itself (or the right pattern). But it is something of a challenge to play them together. It requires the two sides of your body play different rhythms; though different, they are rhythms that fit together in a very particular manner.

Here is a map of the pattern:

And finally, here is the pattern we can see above (just in rhythm), spelled out musically in tablature for the Mbira-style Treble kalimba. This is adapted from the traditional African song “Mahororo”.

The Mbira-style Treble kalimba is a simplification of the mbira dzavadzimu (a traditional African mbira), in the form of a kalimba. It is missing the extra row of low notes the mbira has on its left side. A key aspect of mbira music is the “slide-off” technique, from the upper left row to a tine on the lower left row an eighth note later, and usually an octave lower. But because kalimbas don’t have the mbiras’ lower row of tines, we simulate mbira music here by doubling the notes played on the left by playing the “thump thump” heartbeat rhythm.) 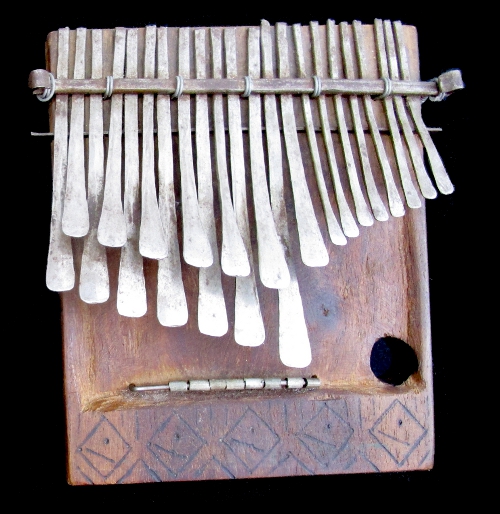 The recording below is for the mbira pattern in the tablature above.

Mark Holdaway has been playing kalimba for over 30 years. He invented his kalimba tablature in 2004, and has been writing books and instructional materials for kalimba ever since. His business, Kalimba Magic, is based on the simple proposition that the kalimba is a real musical instrument capable of greatness. Mark's kalimba books are a down payment on this proposition.
PrevPreviousYou too can play “I Can’t Help Falling in Love With You”!
NextBathed in SoundNext