New tablature for mbira dzavadzimu, plus tabs for Hugh Tracey Alto and B flat Treble Kalimbas

Chaminuka was a real person, a renowned Zimbabwean prophet who foretold the coming of white European colonialists.  After his death, he became a popular ancestral spirit to channel.  Mbira dzavadzimu were and still are used in these ceremonies.

While researching Chaminuka for the Chiwoniso article, I learned that there are at least two totally different songs by this name: “Chaminuka” for the karimba by Chiwoniso, and an unrelated song for the mbira dzavadzimu.  The mbira “Chaminuka” is the classic pattern described by Andrew Tracey in his seminal work “The System of the Mbira.”  I have notated it in my new (and evolving) mbira tablature, and you can also play it on the Bb Treble kalimba and the Hugh Tracey Alto kalimba.  I supply all three of these tablatures to you for free!

That would be “Chaminuka” you hear in the background, as played by KTabS, the Kalimba Tablature Software.

Sharing mbira music through notation has not been developed, and there are not many good options for mbira notation. Staff notation (the traditional western method of musical notation) is exact, but most mbira people cannot really read staff notation.

If you listened to Erica Azim (an American authority on playing mbira), you would never touch any type of mbira notation because the only way you can be sure you are getting the traditional article is if you learn the song looking over the shoulder of an African.

While I generally love graphical kalimba tablature (which I originated), extending it to the mbira is problematic for a few reasons.  The biggest problem is obviously the large number of tines on the mbira,

However, I have made a few modifications in my tablature for mbira. Among these is the placement of color-coded dots that help you keep your place on the instrument and help you transfer notes from tablature to instrument. In addition, placement of tiny mbira diagrams help keeps tablature with so many notes from becoming unwieldy. I believe these and other features make the tablature workable.  Here is the mbira tablature for Chaminuka, and I invite you to give it a try: 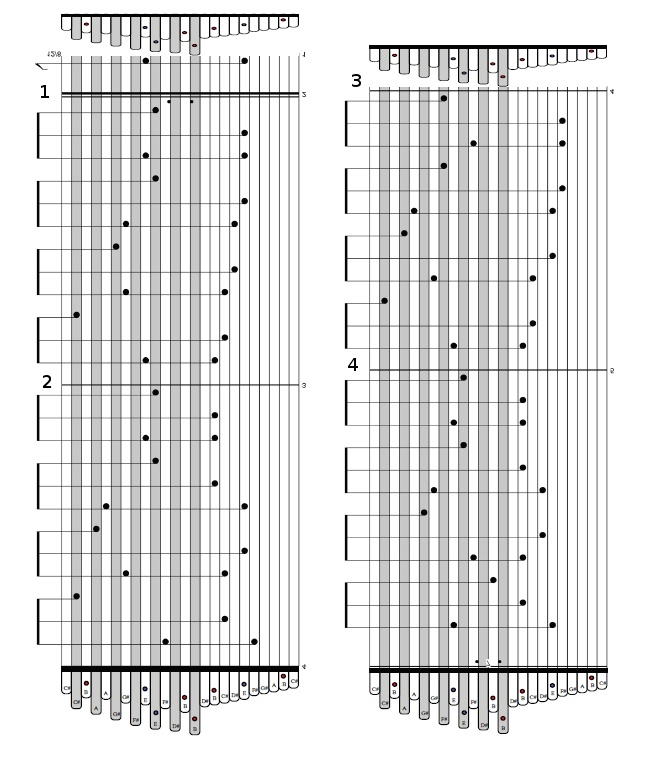 Here are some of the features that I believe make this tablature workable for mbira dzavadzimu:

Diagram indicating which tines are typically played by the two thumbs and the right index finger.

If you have an mbira dzavadzimu, I invite you to download the PDF and give this a try. I do realize, of course, that this odd new tablature will be easier for me than anyone else, because I invented it myself and I naturally think in terms of this tablature. But what about you? Do you find this tablature easier or harder than other methods of learning mbira songs? Your opinion matters. I’d love to hear back from you on this.

In addition to making the mbira tablature, I have also translated this song over to both the Bb Treble kalimba and the Hugh Tracey Alto kalimba. For this song the Bb Treble is better than the Alto, as it goes two notes higher in the scale than the Alto, and the melody really needs one of those extra notes. The Alto must fake its way through that part of the song, but is still playable and makes sense.

There will be a few awkward reaches in the Alto and Bb Treble tablature – or more often, if two notes are played simultaneously and are separated by a 5th, you need to play them on the same side of the instrument, but leave a one-tine gap between the two notes. You have four different options: you can leave one note off; you can play one note with your thumb and the other with your index finger; you can do a glissando to play all three notes including the two from the mbira music plus the tine in between them (that wasn’t supposed to be played); or you may be able to cross over and play the two notes on the same side with your two thumbs.

Mark Holdaway has been playing kalimba for over 30 years. He invented his kalimba tablature in 2004, and has been writing books and instructional materials for kalimba ever since. His business, Kalimba Magic, is based on the simple proposition that the kalimba is a real musical instrument capable of greatness. Mark's kalimba books are a down payment on this proposition.
PrevPreviousKarimba Music: Chiwoniso’s Song “Chaminuka”
NextThe Topsy-Turvy World of Mbira MusicNext