The Topsy-Turvy World of Mbira Music 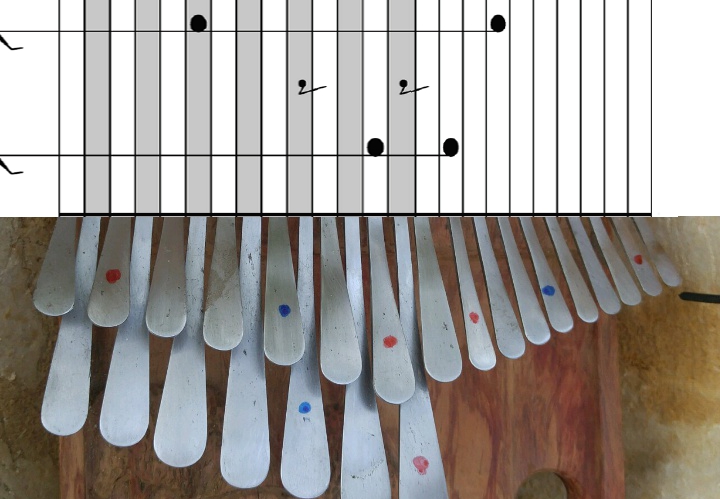 Mbira music is elusive. You think you understand it, you reach to grasp it, but then it slips through your fingers.

There are in truth many ways to understand mbira music – and you learn to strive to come to the place where you touch all of those understandings without holding any.

In another blog post, I give away the tablature for the song “Taireva,” for both mbira and C Alto kalimba.   In this post I detail some of the more subtle aspects of traditional mbira music, using “Taireva” to help in the analysis.  I show you new ways to think about mbira music that will help you play it with that magical feeling of dancing in between one way and another.

Also, the level of detail in the traditional music of the mbira is actually pretty inspiring.  That Africans were doing this stuff many centuries ago really speaks to the genius of the ancient African mind.

The sound recording that can be heard right now is the song “Taireva,” being played by the KTabS program, and that’s me talking alongside the music. The first cool (and important) thing about this song is that there are clearly two different ways you can hear the downbeat. “Downbeat” is a western musical concept, and it refers to where the measure bars fall, or where you start counting the beats. The downbeat is also called the “one.”

The second cool and important notion is that you can hear (and see) the repeating pattern in this music as either three groups of four notes, or as four groups of three notes.

Both the sound recording and the tablature below present the exact same notes.  Yet they illustrate two very different ways of understanding those exact same notes.  As the player you can suggest one way or the other by your musical accents – or you could find a way to play ambiguously that permits the listener to hear the music either way, or even both ways at once.

Please listen carefully to the accompanying sound file while you look at the tablature below. (If the sound file has stopped playing, scroll down to the media player, restart it, and then come back and observe the tablature.) The left staff illustrates the first way of “hearing” the music, where the first note played is the downbeat. The right staff portrays the second way of understanding the music – the notes are exactly the same, but the first note is now considered and played as a pickup, and the second note is the downbeat.  A “pickup” is the first note or notes in a melody that fall before the downbeat and before the measure bar.  The pickup at the top of the right-hand tablature has the word “And” written next to it in blue.

Since the beginning, all tablature I have produced for kalimba starts at the bottom and runs UP the page. For several compelling reasons, I have now started creating tablature for mbira that instead goes DOWN the page. 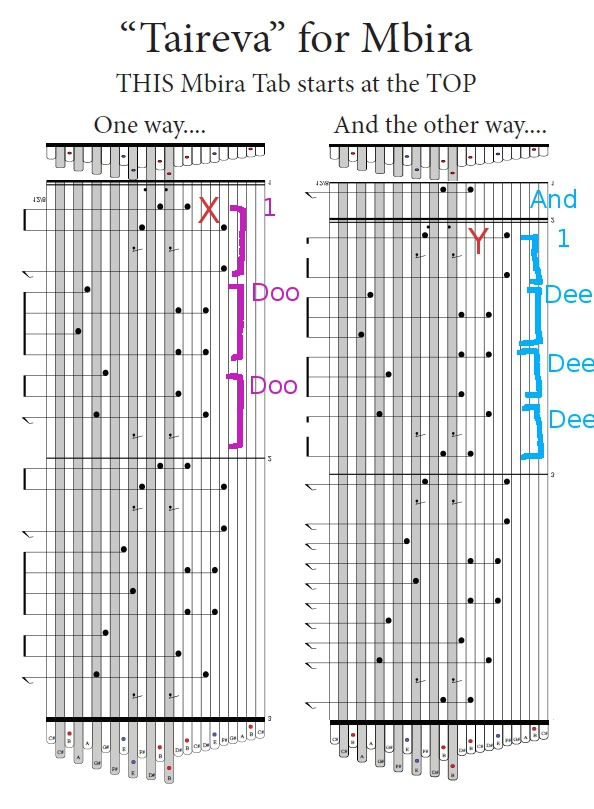 (By the way, “doo” and “dee” are not technical terms, just what I landed on when I was recording my voiceover to the “Taireva” song.)

The diagram above is an illustration of two ways to look at the same thing: 12 beats heard as four groups of three (which I named “dee”), or 12 beats heard as three groups of four (which I call “doo”).  In western music, rhythm and harmony often reinforce each other.  In this music, it would seem that the two might be fighting each other – but in actuality this tension in mbira music between rhythm and harmony produces a different situation that does have its own kind of strength.

These different ways of understanding where “the one” falls is, remarkably, just the tip of the iceberg in terms of ambiguity. The fact that we have these little four-beat harmonic units existing at the same time we have these little three-beat rhythmic units is almost dizzying. Consider this: These rhythmic and harmonic units are neither reinforcing nor fighting each other, but cycling through each other.

To recap, there are two fundamental ways this music is ambiguous: you can start counting at two different places, and the rhythmic and harmonic units do not really support each other, but are always shifting with respect to each other. When we focus on starting counting “one” on the first note, we emphasize the four-beat harmonic blocks. When we consider the first note to be a pickup and focus on starting counting “one” on the second note, we emphasize the three-beat rhythmic blocks.

This is not too difficult to understand in slow motion, through the diagrams. I hope you can also hear what I mean in the sound recording. If you can, do you think you could understand this all in the heat of the moment, when listening to mbira music, or when playing it? Maybe not! But after you’ve played for hundreds or thousands of hours, you probably will develop a feeling for it. You will hopefully be able to hold these competing ways of understanding the music without strongly coming down in one or the other of them.

In relating these concepts to you, I am laying out a map for you. If you are finding all of this a bit much for you to take in, relax.  These blog posts aren’t going anywhere, and you can come back to them and study them at your leisure.  I have been working on understanding this music for years, and you will probably spend many hours pondering over these koans that weave through mbira music.  (A koan is Japanese for a paradoxical anecdote or riddle, often used in Zen Buddhism.)  Yes, it is a totally different world than the world you thought you understood, but it is definitely a world worth exploring and even understanding.

Mark Holdaway has been playing kalimba for over 30 years. He invented his kalimba tablature in 2004, and has been writing books and instructional materials for kalimba ever since. His business, Kalimba Magic, is based on the simple proposition that the kalimba is a real musical instrument capable of greatness. Mark's kalimba books are a down payment on this proposition.
PrevPreviousMbira Song “Chaminuka”
NextThe System of the Mbira – Part 1Next