Free Classical Tablature for Treble Kalimba, Thanks to David Pomatti

David Pomatti of Japan has sent a PDF of free tablature for the 17-Note Hugh Tracey Treble Kalimba. With David’s consent, I am making this music available to you for free. It is hand written kalimba tablature and hand written staff notation, and also includes the original piano sheet music in the original key. This gives you a clear idea of what is included in this free PDF: 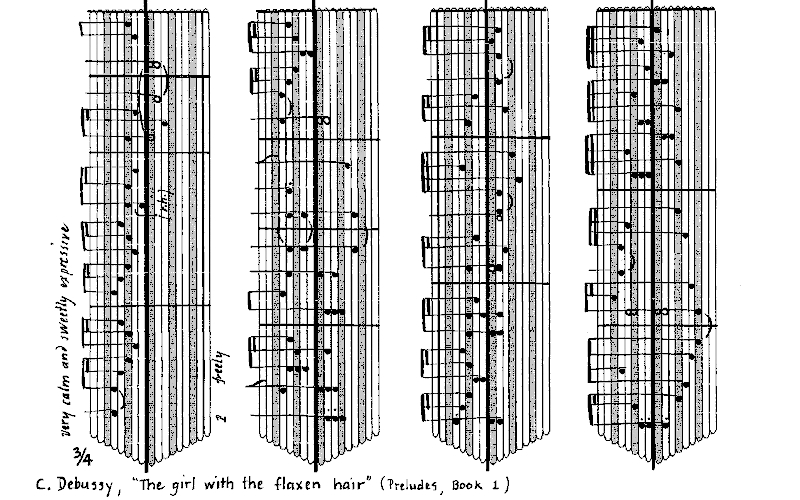 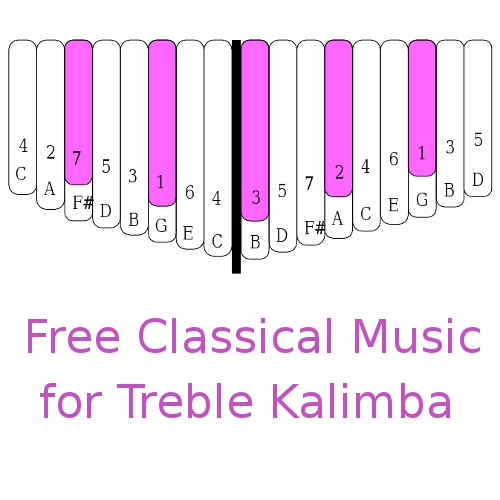 If you didn’t get the memo, the Hugh Tracey Treble Kalimba is painted with a 5-painted tine system, but is in the key of G, with a low note of B, the 3rd of G (“G – A – B” = “Do – Re – Mi” = “1 – 2 – 3”).
You might wonder “Why do it that way?” Well Hugh Tracey started doing it that way back in 1954. There are literally a quadzillion ways to tune a kalimba, and this is one of them.
By starting the low note higher in the scale, on the 3rd, this enables the top note, D, to reach up the the 5th, which makes certain melodies accessible.
Even though this tablature has 5-painted tines, it will not work for the 17-Note kalimba in C!  The Treble Kalimba is tuned fundamentally differently than the 17-Note in C.

What Pieces Are Included

David’s thoughtful arrangements of these impressive classical melodies would be of interest to anyone with a Treble Kalimba.
The pieces include: “The Girl With the Flaxen Hair” by Debussy; “Prelude Op. 11, No. 15” by Scriabin;  “Prelude Op. 16, No. 3” by Scriabin;  “W. N. (Enigman Variation VIII)” by Elgar;  “Imitative Piece (Sketches, Op. 47, No. 6)” by Reinhold Gliere;

Here are some observations David shared about classical kalimba arrangements. It is of interest because it touches various philosophies of arranging music for various kalimbas.
“I have yet to hear my own arrangements played on a kalimba. Yes, I ‘thumbed’ through them when I was writing them down, but heard a performance only when I played the staff notations on the piano. I have a feeling they would sound rather “unkalimbalistic,” just as piano music written by composers who were not themselves pianists often sounds unpianistic. (Composers who wrote concertos for instruments they didn’t play usually gave them to virtuoso friends for constructive criticism.)”
I shared with David my own arrangements of Classical Treble Kalimba Book.  It is also available as the Classical Alto Book and the Classical Alto Download. That book does not exist in a version for the 17-Note Kalimba in C, but there are quite a few classical pieces in the 33 Intermediate 17-Note/C Download. Here is David’s assessment of my kalimba arrangements:
“Thanks so much for these. I see how you have achieved a seasoned balance, arranging them as a performer and not just as a music lover. The chords or thirds support the melody but don’t crowd it out. As I noticed in the Canon, the harmonic speed follows the melodic speed often in reversed order–that is, when the ornamented melody goes fast, it is solo and not dragged down by harmony trying to keep up with it.” 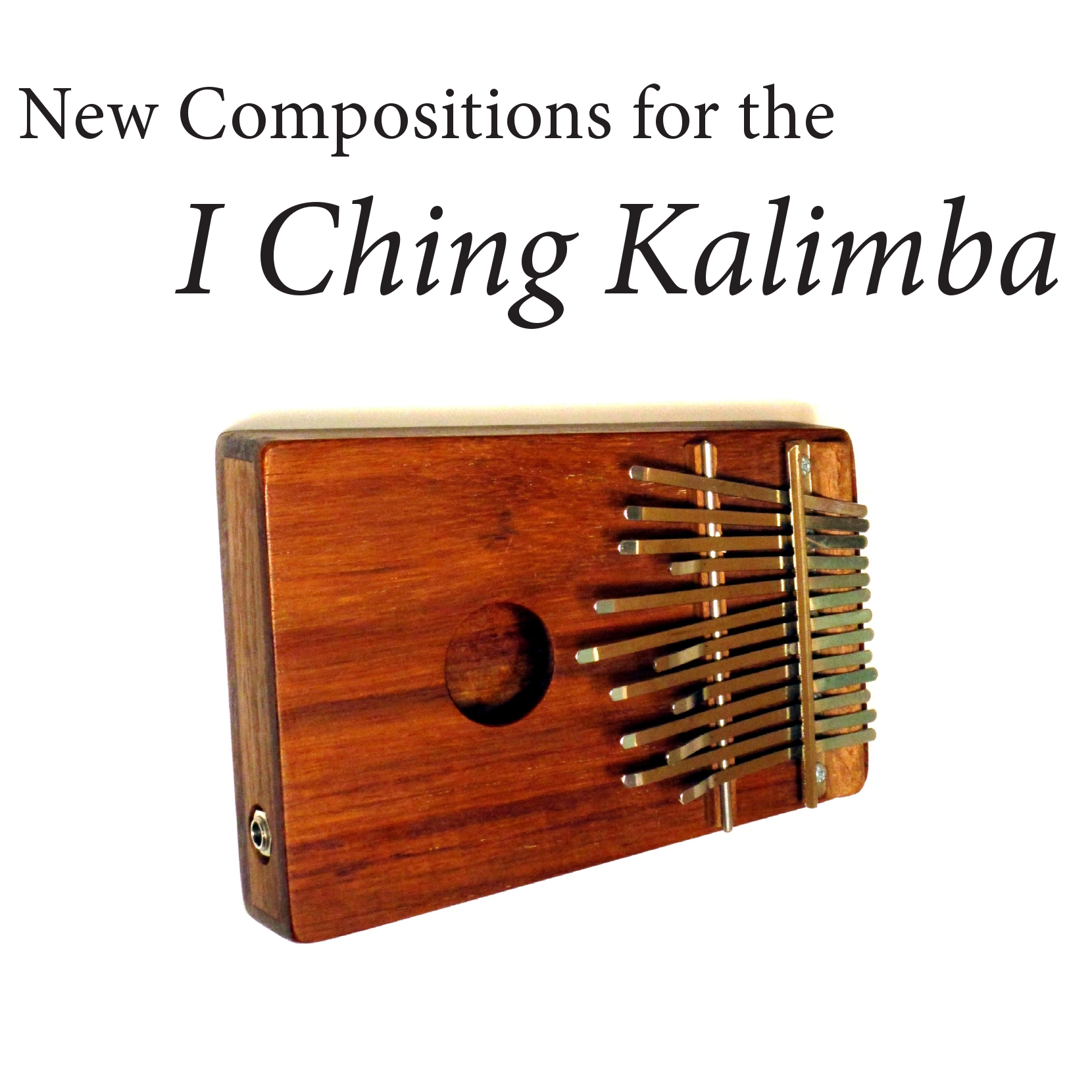 But check this out! There is a strange little kalimba called the “I Ching Kalimba” that is used routinely for modern “classical” music. Around 1970, an academic  Danish percussionist named Gert Mortensen “invented” the I Ching kalimba layout, with short, raised tines interspersed among longer tines. This arrangement borrows heavily from the “African-tuned Karimba” or “Mbira Nyunga Nyunga”.
Mortenen commission composer Per Norgard to write a piece for this kalaimba, which he called “I Ching”. Each year, a few dozen percussion majors and percussion masters students purchase the “I Ching” kalimba from me to perform this challenging piece of music at their spring recital.
A few years back, I created my own compositions on the “I Ching”, and shared it with David.  Here is what David says about the “I Ching” music:

“Before I even opened the I Ching Kalimba file with the staff notations, I remembered the staff notations for mbira music and anticipated something of the same–movement! The African lamellophones are primarily rhythm instruments, and that seems to be the most natural idiom for the kalimba (noticed in your improvisations). Harmonies are laid out as arpeggios or broken chords, which is fitting for alternate thumb playing. That way, each note gets its chance to resonate, and you get the feeling of different melody lines by listening to the different high-low-medium registers. This also avoids ‘muddiness’ of sound when you have too many tones played together.”

I will point out that some of David Pomatti’s arrangements also avoid “muddiness” by mainly presenting the melodies, and using chords sparsely to reflect the chord changes. Other arrangements of his exploit much of the full piano harmonies present in the original piano arrangements.
Which brings the question: how much harmony do you want on your kalimba playing? Most kalimba videos on YouTube feature the melody only. Surely those people will eventually grow into harmony on their kalimba playing.  How much harmony? That is up to what your personal kalimba style is going to grow into.
Thank you, David – well done!

Mark Holdaway has been playing kalimba for over 30 years. He invented his kalimba tablature in 2004, and has been writing books and instructional materials for kalimba ever since. His business, Kalimba Magic, is based on the simple proposition that the kalimba is a real musical instrument capable of greatness. Mark's kalimba books are a down payment on this proposition.
PrevPreviousIf your 17-Note Kalimba is Too Much, Try This!
NextHava Nagila, Middle Eastern Tuning, and the Freygish KarimbaNext