What name should I use for my thumb piano?

When discussing thumb pianos, people use the instrument names kalimba, karimba, mbira, mbira dzavadzimu, and mbira nyunga nyunga – sometimes with specific intent, and sometimes nearly interchangeably.  Where are these different names from, and what do they mean?

In this “family tree” photo, we have the Student Karimba in the center; two African karimbas (also called mbira nyunga nyunga) on the outside bottom row; and at the top, two mbira dzavadzimu. So where does “kalimba” fit in?

Lamella means plate, or tongue. “Lamellaphone” (also spelled “lamellophone”) is an ethnomusicological term describing any instrument that makes its sound by plucking, striking, or otherwise exciting vibrations of lamellae, or as I like to call them, tines. “Lamellaphone” is a pretty general word, and it carries no connotation about traditional or modern.
Andrew Tracey (Hugh Tracey’s son and an ethnomusicologist in his own right) dislikes the name “thumb piano,” partly because the instrument is not played with just the thumbs (other fingers are also used), and partly because the instrument has nothing to do with a piano. In my mind, thumb piano is a nice informal name that will work for either a traditional or modern instrument. I find that most people don’t know the name lamellaphone, but they do know the name “thumb piano.” 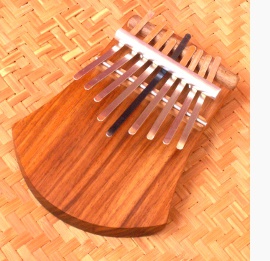 Andrew Tracey says that the karimba is where it all began, and the term actually comprises a family of closely related instruments. It could be the 17-Note African-tuned Karimba, the 15-Note mbira nyunga nyunga popularized by Dumisani Maraire, or the 8- or 9-note instrument Andrew calls the “kalimba core” or “original mbira,” and I call the “Student Karimba.” Each of these instruments is a specific traditional instrument. The 8-note instrument forms the bottom half of the 15-note nyunga nyunga, and the 9-note instrument forms the bottom half of the 17-note karimba. Jege Tapera’s original karimba had only 13 notes, but it was expanded to 15 when it was taught and made at the Kwanongoma College of African Music in Rhodesia (present-day Zimbabwe) in the 1960s. The importance of the 8- and 9- note lamellaphones? Andrew Tracey asserts that they are perhaps the original tuning of the instrument from over a thousand years ago, and that all other traditional instruments have these notes at their core. 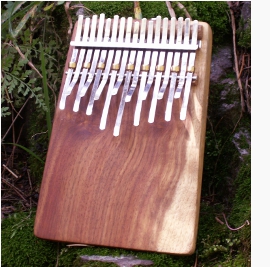 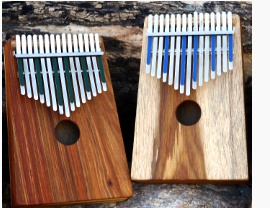 Just like “karimba,” the name “kalimba” was one of the original names of the traditional African lamellaphones. People in northern Zimbabwe referred to their instruments as kalimbas, while people in the rest of Zimbabwe referred to them as karimbas. A.M. Jones wrote a paper called “The Kalimba of the Lala Tribe of Northern Rhodesia” in 1950, but the instrument he refers to is the 8-note karimba – that is, he was using “kalimba” as a generic name. In 1954 when Hugh Tracey began African Musical Instruments (AMI), he chose the name kalimba for his new thumb piano. The new instrument had specific design features from about a dozen different traditional instruments, yet it was a new, nontraditional instrument, capable of reaching out to people of different musical cultures, but also capable of reaching back toward African music. Since Hugh Tracey started building kalimbas in 1954, thousands of people across the globe have made copy instruments. While some of the copies have their own newfangled names, such as Afroharp or Gourd Piano, most makers honor Hugh Tracey by calling them kalimbas.

I sometimes use kalimba as a generic name for any thumb piano, but I find its best uses today are in describing any non-traditional thumb piano. 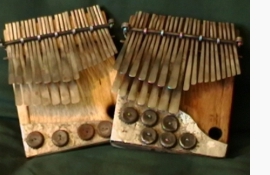 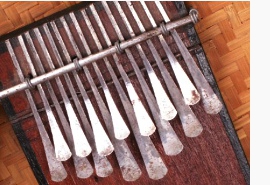 Mbira Nyunga Nyunga – a 15-note karimba of the sort taught at the Kwanongoma College of African Music. When Dumisani Maraire brought the karimba to the USA in the late 1960s, he encountered some people on the west coast who were familiar with the mbira dzvavzdzimu. Rather than call his instrument a karimba, which probably sounded too similar to the non-traditional kalimba which was by then becoming popular world-wide, he wanted a name that would resonate with the name “mbira dzavadzimu.” Dumisani likely coined the name mbira nyunga nyunga – the “sparkly sparkly mbira”. This name characterizes the cultural function of the karimba, which generally was more of a fun instrument than the mbira dzavadzimu that was used for the serious work of spirit possession. The name nyunga nyunga has caught on recently – while it was rarely used in Africa before 2000, more recently its use has become common in Africa.
In Hugh Tracey’s scholarly paper “A Case for the Name Mbira”, he argued that mbira is as good a name as any as a generic name for the entire family of traditional African lamellophones. I think this is a very good rule of thumb, and whenever I refer to an instrument as an mbira, I am drawing attention to it as a traditional African instrument.

There are many other names – sanza, likembe, ilimba, inbimba, mbila, karimbao, marimba, okeme, etc. — apparently Hugh Tracey documented over 100 different names of specific traditional African instruments. I don’t know most of these and don’t use them. I figure that is just as well, as the name space is already very crowded without these extra names. 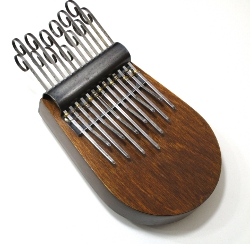 I think the Afroharp was the first commercial kalimba with a totally invented name. The name suggests African pride, but adding “harp” to its name emphasizes the beautiful sound this instrument makes. First made in Chicago in the late 1960s, the Afroharp was created as a competitor to, and inspired by, the Hugh Tracey kalimbas. The two rows of tines tuned in octaves was a feature of the African karimba, and the resonant box and the two sound holes on the back resemble those features of Hugh Tracey kalimbas, but these were details also found in traditional instruments. What was new: an elegant one piece bridge design, a single manufactured tine that would work for all the notes, and an array of looped tine ends that facilitated retuning which also acted as a low frequency resonator. 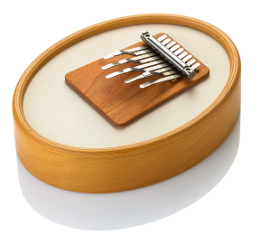 The Sansula is a New Age kalimba that was invented just over 10 years ago when Peter Hokema accidentally played a kalimba on a frame drum and said “Whoa!” The name refers to the Sanza, one of the commonly used names for traditional instruments in Africa. The suffix “ula” means “small”, or “little”, so Sansula literally means “little Sanza”.

I am still waiting for the Sanzilla to be invented. 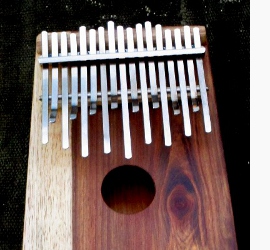 What is SaReGaMa’s Lotus instrument, a kalimba or a karimba? There is a case for either name. First, the Lotus instrument is an African tuned karimba that has had its notes rearranged and retuned. (You can tell a kalimba’s tuning by the lengths of the tines – or the patterns the tine tips make.) As the Lotus is made from an African karimba, with the shorter half of its tines upturned in the traditional African style, it makes sense to call it a karimba. However, the intent of the music made on it is not African, but more New Age. When I am focusing on how it was made, I call it a karimba. When I focus on what music it plays, I call it a kalimba. Wow – sorry if that’s confusing!

One of the musical stories I perform is called “The Big Vibration”. The story features Stella Chiwesha, a real life player of the mbira dzavadzimu. Whenever Stella is holding the instrument, it is an mbira. In the middle of the story, the instrument falls into the hands of a monkey. When Monkey plays it, I call it a kalimba. Why? To try and illustrate the difference between the “real” world of Stella Chiwesha and her instrument, and the obviously made-up world in which monkeys can play thumb piano! But also to make the connection between the mbira and the kalimba, that they are related instruments. And in part, to humble my own kalimba playing…when I play kalimba, trying to copy the grand mbira music of Stella Chiwesha, I have to admit that I feel a bit like a monkey twiddling his thumbs.

My feeling: so many different people have used so many names that you should call your instrument whatever name makes you feel good, but try not to offend anyone. We are already in for a load of confusion. There are no rules here, only rules of thumb.

Mark Holdaway has been playing kalimba for over 30 years. He invented his kalimba tablature in 2004, and has been writing books and instructional materials for kalimba ever since. His business, Kalimba Magic, is based on the simple proposition that the kalimba is a real musical instrument capable of greatness. Mark's kalimba books are a down payment on this proposition.
PrevPreviousThe Evolution of the Karimba
NextMark Holdaway does Facebook Live Aug 19, 3pm MSTNext