Home > Blog > Item > The Evolution of the Karimba

The Evolution of the Karimba

These karimba tunings are a doorway into Ancient Africa. I invite you to peek in to understand something of where your kalimba comes from. And if you are interested, I invite you to step into a karimba journey of your own with one of these instruments.

So, we are just looking into how these karimbas are related. This is how it fits with the big picture of kalimba evolution in Africa. It also shows you how these modern versions of the karimbas relate to their historical counterparts. 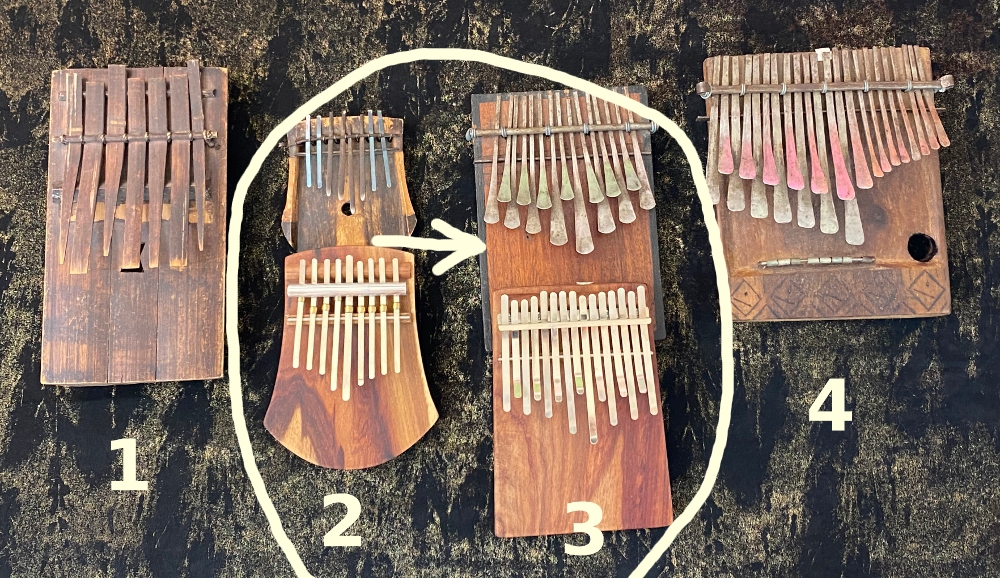 This article just focuses on going from (2) “the original mbira” or “student karimba” -> (3) the “karimba” or “mbira nyunga nyunga”. The modern versions of these instruments don’t look rustic and don’t look traditional. However, because they are tuned in historically accurate ways, you can play the traditional songs on them. They give you a sense of what it was like to create music as an Ancient African. And the modern mechanics make tuning and maintaining these instruments a breeze compared to the traditional ones.

In this article, “kalimba” is used as a generic instrument, traditional or non-traditional. I use “karimba” as this small family of karimbas, either (2) or (3) above, or any point in between. If you need more background, read here:

You see, traditionally in Africa, kalimbas were often tuned with their 3rd in between a major 3rd and a minor 3rd. Hugh Tracey believed that he could trace the details of exactly how the African 3rd 9and other notees) was tuned through different stages of kalimba evolution. I don’t think that is correct.

However, Andrew Tracey had a different idea: in Africa, kalimba tunings tend to come in 5-note scales, 6-note scales, and 7-note scales… but the notes in these scales are not that far from our current understanding of these notes, ignoring the deviations from western tunings. Then, just following the basic notes on a bunch of kalimbas, you can see how the notes were added.

Read this interview with Andrew Tracey to understand how he connects the tuning of these karimbas to the mbira dzavadzimu (an exercise that I will leave out in this article).

Note: we dates we have for these various kalimba designs are very late – 1930, 1950, 1960. This is because these are the times that the kalimba caught the inspiration of the people who write things down  (ie, the white Europeans).

Based on the way instrument making was performed in Africa, some of these tunings could have been existence for many generations prior to those dates. Andrew Tracey believes that the “original mbira” tuning is actually the tuning of the first metal tines karimbas of the Zambezi Valley from over 1000 years ago.

We indicate the tuning of each instrument below. You can see that the lower row notes are basically unchanged, and that there have been a number of variations of the upper row notes. Keeping the lower row notes essentially the same basically means that you can play the old traditional songs as these karimbas evolve into more complex instruments with more notes. On each karimba’s recording, you can hear me playing Butsu M’Tandari. When there are more notes, I play a more complex variation. 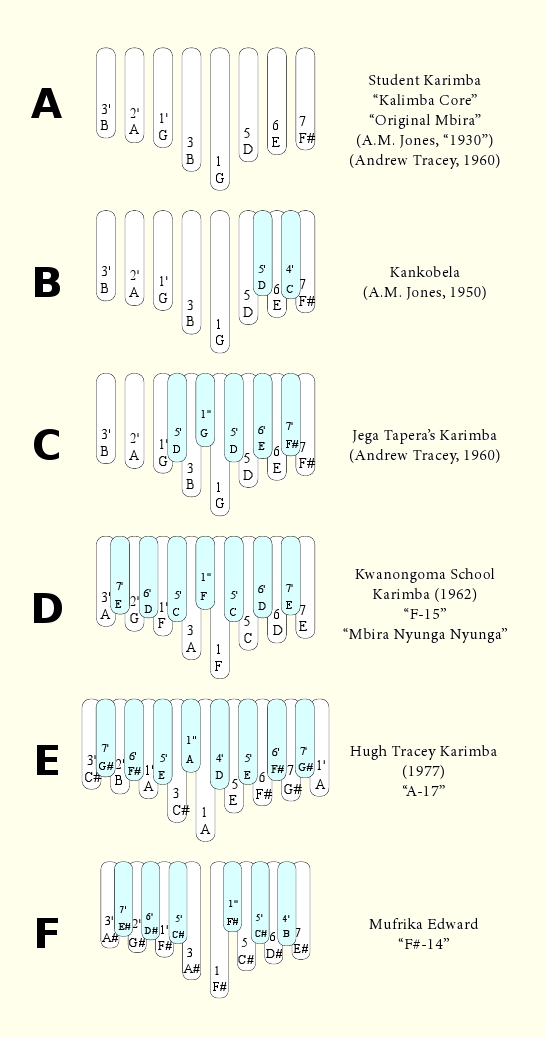 A) The first mention of the kalimba in western writings was Father Dos Santos, in 1586, who documented an 8-note instrument. However, Dos Santos did not think to try to understand the tuning, so we cannot say that it was tuned like the “Kalimba Core”.

B) The first western literature that explored traditional kalimba tunings was a paper by A.M. Jones (1950): “The Kalimba of the Lala Tribe in Northern Rhodesia”. In that paper, Jones documents a 10-Note instrument called the Kankobella. He also mentions that when he visited the same tribe in 1930, their kalimba had only 8 notes! The two upper row notes were added between 1930 and 1950, but the members of the tribe indicated that these notes were not used in any of the traditional songs.

(I myself don’t believe that – if you try to play this instrument, you will find that these two upper row tines are the most fun to play! I myself believe that the Lala Tribe was willing to share a lot about their kalimba… but they reserved those two upper row notes for their own private enjoyment!)

C) In 1960, when Andrew Tracey was searching for teachers of traditional African music, he discovered Jega Tapera in the township of Bullawayo. Jega Tapera had a 13-Note karimba, and he knew a lot of the traditional karimba songs. Jega bought his karimba as a young adult, and did not learn karimba in his home or in any particular tradition. However, he learned many songs from traveling musicians. The fact that his particular instrument could play a wide variety of songs from a wide variety of locations  (Mozambique, Zambia, Rhodesia) is significant.

D) When Andrew Tracey enlisted Jega Tapera to teach his pan-African karimba songs at the Kwanongoma School for African Music, they redesigned Jega Tapera’s karimba. First, someone symmetrized the upper row tines. If you look at the song arrangements in Andrew Tracey’s 1962 paper, or in the appendix to “The Soul of Mbira”, all of these songs point to the right side upper row notes being present in Jega Tapera’s original instrument. The upper left tines are generally not used in those arrangements of the traditional songs.

Also, the pitch of the instrument has been lowered, from G to F. Why? I don’t know. But the Kwanongoma Karimbas were played in modern plywood “deze” – resonators that amplified the sound overall, and especially lower notes. So, these resonators would have permitted the lower notes to sound good. And perhaps the lower F was better for someone’s voice to sing along with? I will note that Dumisani brought this instrument and its repertoire to North America in the 1970s. He called it the mbira nyunga nyunga, and now many people just call it Nyunga.

E)  The Hugh Tracey African-tuned Karimba: This is a 17-Note instrument keyed in A. Why 17? and why A? Because the hardware they had accommodated 17 tines, and the lowest the tine wanted to be was A. (Actually, you can tune it down to G… but F doesn’t sound very good, and the tine wants to fall off the bridge.) With two more notes, this instrument adds the 4th (D in the upper row) and a duplicate 1 note (A on the far right). This is the first tuning with a 4th in it. Andrew Tracey said that this tuning was documented in the field by his father. I estimate that the Hugh Tracey Karimba started in production around 1977. This was a way for Andrew Tracey to put his unique mark on the business… but he was also able to honor his father’s unique contributions to the study of the kalimba. This instrument ships from Africa in a microtonal tuning, with the 3rds, 6ths, and 7ths all in between major and minor intervals. This is the tuning that Hugh Tracey documented with his microtonal tuning fork set. By the way, this recording has been adjusted to the major intervals.

F)  But check this out! I learned of this tuning from Mufrika Edward, on Facebook. He got it from his father. So, it is at least a few decades old, and might be ancient. It is a delightful tuning to play with. But notice this: just like the Kankobela layout (A.M. Jones, 1950), this karimba has the “4” and the “5” on the far upper right. That is, the Kankobela’s “new notes” from between 1930 and 1950 could share a common origin to Mufrika’s tuning.

Do You Want to Explore the Karimba World? Instruction Materials for Different Karimbas

Basically, each different version of the instrument will be capable of a slightly different body of songs. So, we have a whole bunch of different books or instructional downloads to address this range of instruments.

A) Instructional Materials for The Student Karimba (8-Notes, 9-Notes, C or G)

B) Instructional Materials for the Kankobela (10-Note)

Use Student Karimba instructional materials for the lower row notes

E) Instructional Materials for The Hugh Tracey Karimba (17-Notes, A)

We are going to pause this story for now, but we will come back next time to show a whole slew of modern karimbas. By modern karimba, I mean a kalimba with two rows of tines, lower and raised. But the tunings of these instruments are modern, and the notes are arranged for other, non-traditional music. When you hold these other tunings and note layouts in your hands, you know that the maker was inspired by the traditional African karimbas.

That is important to remember: it all goes back to Ancient Africa, and playing these kalimbas and their traditional songs is a way to connect with and honor the powerful culture and spirit of Africa.

Mark Holdaway has been playing kalimba for over 30 years. He invented his kalimba tablature in 2004, and has been writing books and instructional materials for kalimba ever since. His business, Kalimba Magic, is based on the simple proposition that the kalimba is a real musical instrument capable of greatness. Mark's kalimba books are a down payment on this proposition.
PrevPreviousDownload for Celtic-D Karimba: Method Exercises, Simple Songs and Celtic Songs
NextIs it Kalimba, Karimba, or Mbira?Next