Hugh Tracey Kalimbas for Any Key – Oh, and Paint Colors

In another post I made today, I play “I Can See Clearly” on three different diatonic kalimbas. Why? The song is chromatic, requiring notes that aren’t on the first kalimba.

Now, many kalimba players won’t need to venture beyond the key of C. But if you play kalimba long enough, you will not only come up against the limitations of that one key… you will also be looking for a way to transcend those limitations. One way is to have kalimbas in different keys. 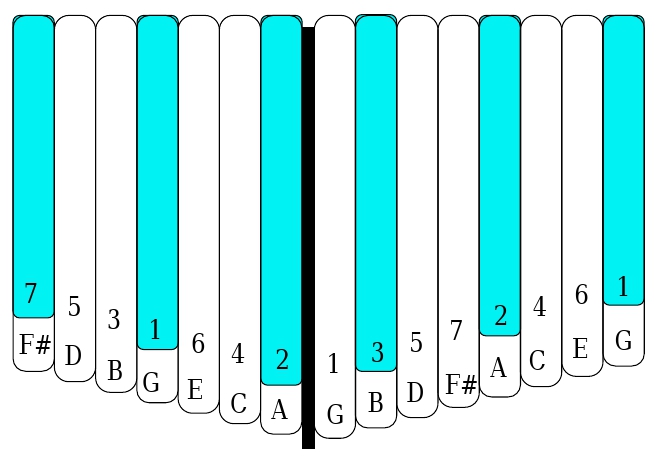 The Alto Kalimba’s standard tuning is in G, but we can tune it to E, F, F#, G, G# and A. That is, we can easily tune each tine up or down by a whole step… and usually by a step and a half. Much more than that and we are likely to run into various problems with the final instrument.

Why would you want an Alto Kalimba in one of these keys? OK, most kalimbas are in C, which is not at all a low note. G, the low note of the Alto kalimba, is a 4th below that C. But G is not that low either. If you are looking for a kalimba with a low low note, look into the Alto kalimba tuned down to F or E.

If you have an Alto Kalimba in any of these keys, they can all read Alto tablature, but only the Alto in G can play along with the sound recordings that come with the books and ebooks.

Oh – and you will note the Alto Kalimba tuning chart, with only 15 tines, looks larger than the Treble Kalimba charts, which have 17 notes. Is that right?

By the way, if the 17-Note Kalimbas have tines that are too close for you to accurately play, you should check out the Hugh Tracey Alto Kalimba. They are a total joy to play, and the extra space makes them easier to play. 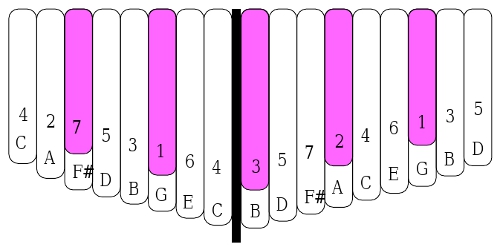 This one is NOT in the video, but is a stepping stone to the Bb and D Trebles.

The Treble Kalimba is usually in G, just like the Alto, but with a low note of B. Even though this was the “Original Hugh Tracey Kalimba” first made in 1954, this is not what most people expect from a kalimba. They expect the low note to be the root note. But this kalimba is not in the key of B, rather the B is the 3rd of the scale.

FYI: the Chinese-made 17-Note Kalimbas in C copied the Hugh Tracey Treble Kalimba, including the way the tines were painted… but then tuned the kalimba differently. This introduces a logical inconsistency in this otherwise perfectly-ordered system of tunings and tine paintings that I have built my 30 kalimba books and 60 kalimba ebooks on.

The Bb (B flat) Treble Kalimba 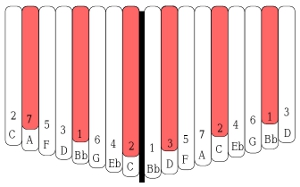 Compare, if you will, the precise notes of the Bb Treble and the purple-tined Treble Kalimba above. Most of the notes are actually the same. D matches D. B almost matches Bb. G matches G. And so on.

Now, look at the numbers: the “1” is in the center, just like for the Alto Kalimba. By retuning a few tines, we have done a judo flip and have transformed the low note to be the “1” or key note.

In other words, this kalimba is minimally different from the original Treble Kalimba, but in a way that puts the root note in the low note. That is, it is maximally similar to the Alto Kalimba from a player’s point of view. I have also painted this the same way as the Alto kalimba, with the middle and high “1” tines (Bb) on painted tines.

Because this kalimba has two more notes than the Alto Kalimba, we have two unpainted tines at the top, C and D. Those top two notes don’t get played on the Bb Treble Kalimbas in the video.

By the way, the Bb Treble Kalimba is the same as the 17-Note Kalimba in C… except it is a whole step lower, But we can retune it to C. There is not a lot of instructional material for the Bb Treble, but it can read both Alto Tablature and 17-Note/C Tablature. 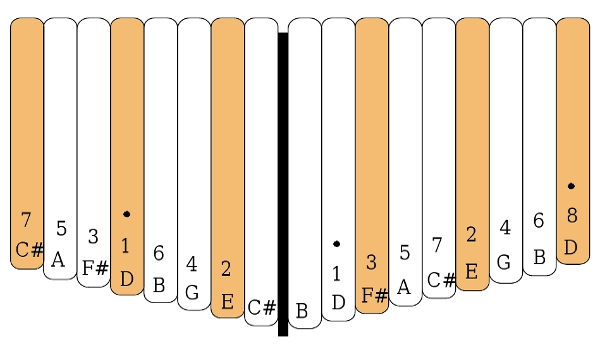 On the Bb Treble, the root note is the low note, which puts two extra notes at the top of the instrument’s range. The D Treble Kalimba is set up such that the top note is D, the key note. This lets us go to higher keys. This means the two extra notes – B and C# – are at the bottom of the kalimba’s range.

The tines marked with the small dot are the root note, D. Why would you want to play a kalimba set up like this? You might need one of the keys it can easily be tuned to: C, C#, D, Eb, E, or F. Just like the other kalimba setups we have seen previously in this post, the low root note is unpainted with the next two higher tines painted, and the middle root note and the high root note are on painted tines.

Another feature of this kalimba is that it loves to play in the relative minor. The relative minor of D major is B minor. If your thumbs insist on drifting down to the lowest tine as the root note, you will be playing in the natural minor mode. By the way, if you tune into a pop radio station, most of the songs will be in this natural minor mode, so it is an entirely enjoyable aspect of the D Treble ride.

All These Kalimba Tunings are Essentially Similar

In case you didn’t see it in the similarity of the tuning charts, each of these tunings is within the same system. Any music that you can play on the Alto Kalimba in G can also be played with the exact same thumb strokes on the Bb Treble or the D Treble kalimbas. The landmark painted tines will be in the same places, and will mean the same things relative to the degree of the scale. And you can even use the same tablature for all. (That glosses over the two extra high notes on the Bb Treble and the two extra low notes on the D Treble. But those are small additions to the general equation.)

Why would you need kalimbas in different keys?

If you are a recording artist, you likely record in different keys, and you would not want to just be stuck with C.

Do you play or perform with other musicians? Surely they are playing songs in many keys. If you want to keep up with them, you will need to have a bit of key diversity.

If you sing and play kalimba, you will understand that different songs will require different keys for your vocal range. Research your songs carefully to determine what kalimbas you need to do them.

BTW, we sell sets of kalimbas at a discount. For example, the Sweetheart Deal is an Alto and a Treble. The Key Master is two Altos and two Trebles. These kalimbas can be tuned in any way you need. If you don’t know exactly what you need, or if you would like multiple kalimbas in a discount package that doesn’t exist as a formal product, you can consult with me.

Oh, and tine color? What matters here is which tines are painted. The color they are painted does not matter to me. It might matter to YOU though!

The original Hugh Tracey colors were blue and red. While both Altos and Trebles came in both colors, there was an eventual preference for red Trebles and blue Altos.

Kalimba Magic uses red, blue, green, yellow, black, and white as the standard colors. But as you can see in the top video, my associate Kalimba Doctor Mike can mix up other colors. I should add that we have extended the tine-painting to other non-Hugh Tracey Kalimbas. We also paint the Hokema B17 or the 17-Note Kalimbas in C such as the Heart-17 and the Bamboo-17.

When you purchase a kalimba from Kalimba Magic, we let you select the paint color. If you want a different color, or multiple colors, or some other painting scheme, you can ASK for it. Select the CUSTOM paint, but you will have to communicate with us as to what exactly you want.

On several of our 17-Note kalimbas, we also give you the option of painting 5 tines, the Chinese tine painting system (which was a confused copy of the Hugh Tracey scheme). Or, if you don’t know what you want to do, you can get your kalimba unpainted. Why? So you can color the tines any way you want in the future. Sharpie Markers and Nail Polish are both removable.

So, what are you waiting for? Go get your Kalimba Magic Kalimba today!

What About the “D Treble Kalimba”? What Book does it use?

Mark Holdaway has been playing kalimba for over 30 years. He invented his kalimba tablature in 2004, and has been writing books and instructional materials for kalimba ever since. His business, Kalimba Magic, is based on the simple proposition that the kalimba is a real musical instrument capable of greatness. Mark's kalimba books are a down payment on this proposition.
PrevPrevious“A Middle Eastern” Tuning for the Moon-10 Kalimba
Next“I Can See Clearly” or “How to Make Flats and Sharps on the Kalimba”Next