Have you ever wanted to get clear on the differences between the various treble kalimbas?

One of my best contributions to the kalimba world (in my humble opinion) is the concept of the Bb and D Treble kalimbas. These are alternative ways of structuring the standard G Treble to make it more like the Alto kalimba, but pitched higher. Making a Treble kalimba more like an Alto makes the Treble easier to play and simpler to understand. The Alto’s note layout is more logical, and any song that you can play on the Alto can be played on the Bb or D Trebles, so any instructional resource for Alto can be used for these two Treble tunings, and there are more resources for Alto than for any other kalimba.

Treble kalimbas in various tunings are great to have for a bunch of reasons. Trebles are smaller than Alto kalimbas, making them somewhat easier to handle. They are higher than Altos and thus have a different range, which, among other things, means that they can be heard better than an Alto over guitars and drums. They have great flexibility, and a song can sound different based on WHERE you play in their range. They have two more notes (tines) than the Alto, so you can play more stuff on them, and their tines are closer together which means they can be played faster (though it requires a bit more dexterity to do so).

Painting kalimba tines is a way of creating easy visual reference points that can be very useful while playing.  In our two alternative Treble tunings, the painted tines are progressively shifted (from the G Treble) up to higher pitches (on shorter tines farther out to the edges of the kalimba), which, in conjunction with retuning a few of the tines, puts the kalimbas into progressively higher keys.

The standard Treble kalimba in G tuning has five tines painted, including the central tine, and has two unpainted tines on the far left and far right sides of the kalimba.

The D Treble kalimba also has six painted tines. There are three unpainted tines in the center, and the far right and left tines are painted.

Listen to the music playing (or click the player near the bottom of the page) and look at the diagrams of the G, Bb, and D Treble kalimbas below. As I played for this recording, I used the painted tines as a reference. For example, the second note in each musical phrase is the painted “1” tine in the middle of the left side of the kalimba. 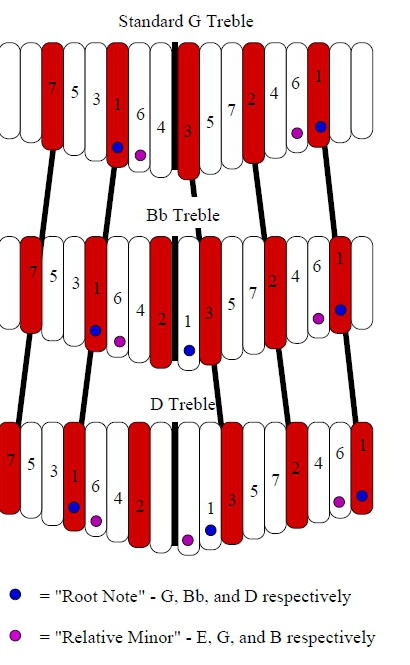 The cool thing about this system is that I can learn to play the song once, referenced to the painted tines, and then I can pick up any of these kalimbas, and seamlessly play that song in any key I want to. (Well, except that the standard G Treble is missing the low “1” and “2” tines.)

An interesting fact: the D Treble has its root note, D, the “1,” on the second tine to the right of the center. The lowest note is the “6”, or B, the root of the minor (it has a purple dot, as do all of the B notes on this kalimba). That is, if you just pick up the D Treble kalimba and reference to the lowest note (moving just one tine to the left from the root note), you will naturally be playing in the minor.

The G Treble could be tuned to other keys as well… but it makes more sense to me to retune a G Alto to cover F, F#, G, and G#. In other words, between the G Alto, the Bb Treble, and the D Treble, we have a system of similar kalimbas that can cover every western key.

The Bb and D Treble kalimbas both read Alto tablature. This means if you own one of these kalimbas, the series of Alto books and downloads is available to you for learning songs.

The G Treble kalimba is lacking the lower two notes of the G Alto kalimba, which are prominent in almost every Alto song. Hence, the G Treble cannot read Alto tablature, but the G Treble has its own series of books.

Mark Holdaway has been playing kalimba for over 30 years. He invented his kalimba tablature in 2004, and has been writing books and instructional materials for kalimba ever since. His business, Kalimba Magic, is based on the simple proposition that the kalimba is a real musical instrument capable of greatness. Mark's kalimba books are a down payment on this proposition.
PrevPrevious“Edelweiss” for G, B flat, and D Trebles
NextRepetitive Patterns: Creating Music with Kalimbas in Different KeysNext