A “Just So” Story, with thanks to Rudyard Kipling

My very first kalimba was a Treble. I had actually just come from a friend’s house who had an Alto, and we’d all played the Alto and loved it – but when I went to the drum shop in Cambridge, Massachusetts back in 1986, they only had the Treble, with the 3rd note of the scale in the lowest tine (and not the root note, as in Altos). I bought it, but somehow I never really bonded with the instrument. A few years later, I got an Alto kalimba, and it was like day and night! I understood the Alto, with the root note as the lowest tine, and its range of exactly two octaves. (That is, the lowest note was “Do” of “Do Re Mi”, and the highest note was also “Do”, two octaves up.) With the Alto kalimba now in hand, my Treble was set aside. It eventually went to live with a friend, while I developed my long love affair with the Alto kalimba.

The concept of a Bb Treble kalimba was not initially a clear shining notion in my mind, but rather a design that I backed into over the course of months. Here is how that went: My son had bought me a vintage Hugh Tracey Treble in excellent condition from Ebay. It sounded great, but it would not stay in tune for even an hour – each tine went sharp! I figured that the bridge did not have enough friction to stay in place, and as it was slowly pushed out by the tines, the vibrating lengths of the tines grew shorter and they went sharp. I pushed the bridge back into place, and a bead of glue where the bridge met the facewood fixed the sliding issue. The tuning no longer drifted. However, I had pushed the bridge a bit too far up, making the vibrating length of the tines a bit longer, and the pitches were all a bit lower. When I went to play the first tine to see how I needed to adjust the tuning, it played a Bb instead of a B, and then it came to me in a flash: I should just tune to the Bb major scale, with Bb, the root note, on the longest tine. And so I did.A few weeks later, I realized that I was always getting messed up by the positioning of the painted tines. In this new tuning, the painted tines were not where I really felt they should be. So I scraped the paint off the the five painted tines, and I used Sharpie marker to color the six tines I thought should be painted in this key. (Sharpie markers are good for experiments like this because their ink is easily removed with alcohol wipes.) This tuning and note layout worked perfectly for me on that Treble! It had the look and feel of the Alto, but was pitched higher, and with two extra high notes on the far left and right. Very quickly, this first-ever Bb Treble became my favorite kalimba. It was the instrument I usually picked up when I went out the door, and often the instrument I played as I lay down to go to sleep. It had become my home kalimba. And to think that I had come to find this home quite by accident! 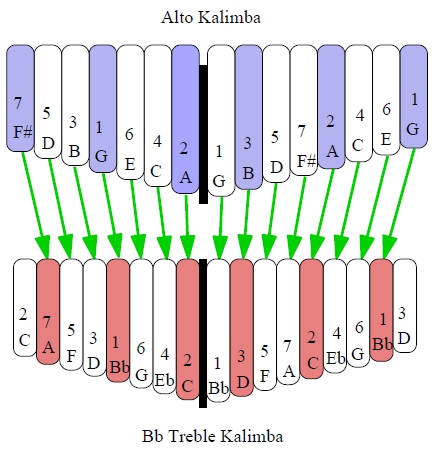 Let’s compare the tuning charts for the Alto and the Bb treble kalimbas. (By the way, the color of the painted tines on kalimbas is not significant. What is meaningful is which tines are painted.) Every note on the Alto has a corresponding note on the Bb Treble, but raised a step and a half. G on the Alto is raised to Bb, A is raised to C. But each corresponding note plays the same role in the scale. That is, the “1” on the Alto is also a “1” on the Bb Treble. The note names do not match up, but the numbers do match across the diagram’s green arrows. And of course, the painted tines match too.
A few months into my new relationship with the Bb Treble, I realized the six painted tines of the Bb could be shifted outward and upward by one tine, to make the D Treble – also laid out like the Alto, except with two extra notes below the low root, in the center of the kalimba. And with the G Alto, Bb Treble, and D Treble all in hand, I realized that each could be tuned up or down by as much as a whole step, and I saw that this would cover any of the 12 western major keys… all the while maintaining the look and feel of the Alto. With this system, I could play any of the hundreds of songs I had learned on the Alto, in any key.

As I finalized the underlying logic of this system of kalimbas, I realized that I needed to make these available to the rest of the world. People were requesting a kalimba just like the one I used at my performances. So, on April 15, 2008, I launched the two new products, the Bb Treble and D Treble kalimbas, modifications of the basic Hugh Tracey Treble kalimba. And in so doing, I had also created the concept for a large part of my future work – figuring out new kalimba designs that are of interest to me, and making them available to the world.
And that is how the Bb Treble got its stripes.

Mark Holdaway has been playing kalimba for over 30 years. He invented his kalimba tablature in 2004, and has been writing books and instructional materials for kalimba ever since. His business, Kalimba Magic, is based on the simple proposition that the kalimba is a real musical instrument capable of greatness. Mark's kalimba books are a down payment on this proposition.
PrevPreviousSpotify Playlists with Cool Songs in G, B flat, and D
NextTambourine as a Creative Kalimba Amplifier ResonatorNext