Alternate tunings for the Alto Kalimba?

Alternate tunings for the Alto Kalimba?

To me, half the fun of the kalimba is to explore the realms of alternative tunings. If you ever get tired of your kalimba and the things it plays, it is probably time to experiment with an alternative tuning. A good tuning will transform the universe of possibilities open to your kalimba. You can invent your own tuning, but first you should check out the alternative tunings we have documented for each kalimba. And really, there are thousands of good tunings possible for every kalimba, so there is a lot of ground to explore.

There are many other tunings for the Hugh Tracey Alto Kalimba, but I recommend that you start with the standard G major tuning. Most of the tips, tablature, and books were written for the standard tuning, so a good path to follow is to keep your kalimba in the key of G for a year or two or three as you learn, and then branch out into other tunings as you progress. 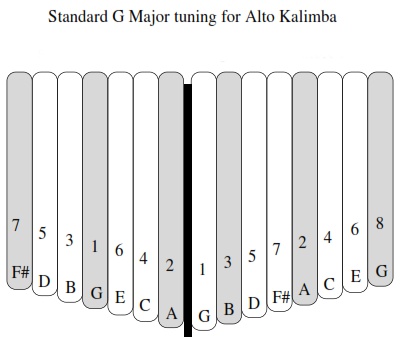 The Hugh Tracey Alto Kalimba’s standard tuning comprises two octaves of the G major scale. The lowest and highest notes are both G, which is the root note, making this tuning easy to understand. Furthermore, there are tons of books and downloads that work with this tuning. The A, Ab, G, F#, F, and E tunings are all basically the same pattern, all with the root note at the bottom and the top notes – hence they can all read the same tablature and use the same books. Why would you want another key other than G? If you don’t know, stick with G tuning.

The letters on the tines in the diagram are the names of the notes each tine is tuned to. The numbers are the degree of the scale – that is, 1, the root note, is “Do” as in “Do, Re Mi, Fa, So”. The number 5? count up, 1, 2, 3, 4, 5, which would be “Do, Re, Mi, Fa, So”. Of course, 8 is the “Do” at the top of the scale, and is the same note name as the bottom “Do” of the scale – that is, 1 and 8 are the same note. The “Do, Re, Mi…” scale is synonymous with the major scale, which is the standard reference for all other scales. Some other scales will have lowered versions of some of the degrees of the scale – a minor 3rd is a lowered, or flattened (taken down a half step) 3rd, and we refer to it as “3-“. Some scales have raised or sharpened (raised a half step) versions of some of these notes, and we indicate them with a plus sign, as in “4+”. And some scales will completely skip some degrees of the scale – the major pentatonic scale skips the 4 and the 7. Stick around, and you’ll learn a lot about music through the little kalimba. 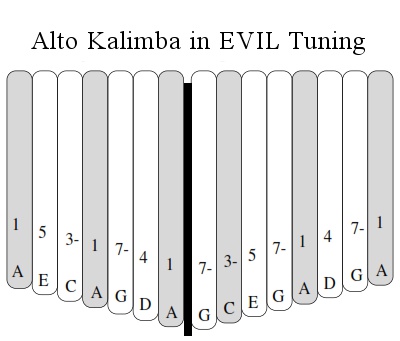 Maurice White of Earth, Wind, and Fire used a 17-Note Treble Hugh Tracey kalimba tuned to an A minor pentatonic scale with redundant notes, wowing people on songs such as Evil and Kalimba Story during the 1970s. The tuning on our Evil Alto kalimba is analogous to the tuning of Maurice White’s Treble kalimba.

In the tablature diagram, the painted tines in the middle of the left side and the middle of the right side are both tuned to A notes, and the next lower tines on both sides are tuned to G notes. This novel tuning permitted Maurice to perform a fast trill on either of those notes by alternating quickly between the left and right versions of either the A or the G, twice as fast as you could trill any single note played on just one side.

The lowest note is the “7-” or flat 7, also known as a minor 7, and it leads into the root note, A = 1. Other notable features are the minor 3rd or “3-“, and the missing 2 and 6, and the root note A at both the top right and the top left.
This type of scale came out of the work of Chicago jazz musician Phil Cohran, who employed an electric kalimba with a similar tuning when he recorded with Sun Ra in the 1960s. Part of the draw of this scale is its distinct African “feel” – one of Hugh Tracey’s research findings was that about 40% of traditional African kalimba tunings use a pentatonic scale like this one. Phil Cohran inspired Maurice White with his use of the kalimba as a symbol of Africa, the pentatonic scale to represent African music, as well as his use of those redundant notes in building musical excitement. 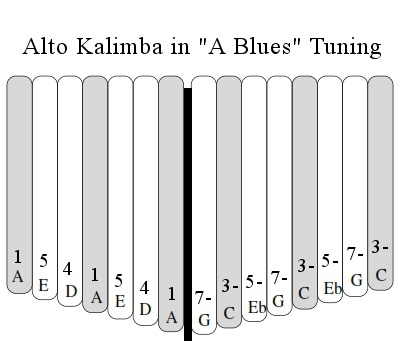 There are actually several “blues scales”. I’ve known about this type of blues scale for 40 years. It is almost exactly the same as the minor pentatonic scale, and it would go great with the Maurice White Evil Tuning. It has an extra note thrown in, the Eb, between the 4 and the 5 in each octave. You can think of it as a raised 4 or “4+” or as a flat 5 or “5-“. In contrast to the Evil tuning, this one does not have any redundant notes. In this tuning a C is added at the very top, with two “5-” notes, the Eb’s that are both on the right side. In the language of the blues, the “5-” note is also called the “blue note”; in the classical world, the “tritone”; in medieval times it was called the “devil’s interval” and its use was forbidden by the Church!

This is not the same tuning Kevin Spears uses, but it is quite similar in nature.

Coming soon: recording of the Alto A minor Blues Tuning. 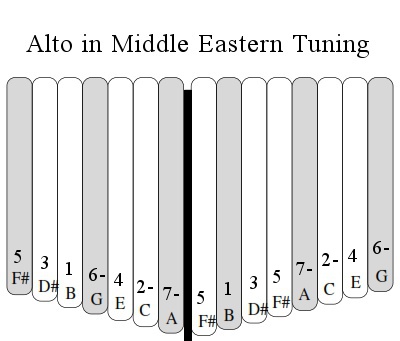 The Middle Eastern tuning was my first alternative tuning, in 2001 of all times. 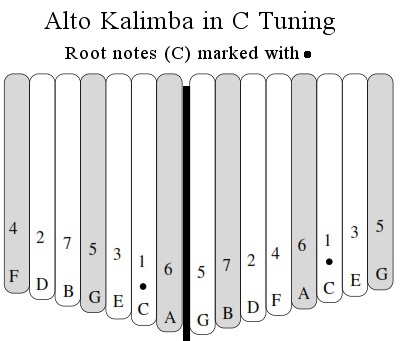 There are two broadly different ways of changing the key of your kalimba. One way is by retuning all the tines in the same way (i.e., pulling out every tine by a half step, which will retune the standard Alto kalimba from G down to F#). The other way is to retune around the
Circle of Fifths – changing just one note per octave will transform both the key and the note layout of the instrument. An example of this is going from the Alto’s standard G tuning to the C tuning shown here. The two F# tines are retuned a half step down to F, and the root note becomes C.

Why would one want to change an Alto kalimba to C from G tuning? Three reasons come to mind: (1) you might need to play kalimba in the key of C to accompany a vocal song for it to be in your vocal range, (2) you can play similar music but in a significantly different range with respect to the root note, enabling you to potentially play a lot of different music and (3) you might need to play in the key of C to play with other musicians – I use my C-tuned Alto to play with my marimba band Baba Marimba.

Here’s the best thing about the C-tuned Alto Kalimba: this is one of the easiest retunings, so you can do it yourself. 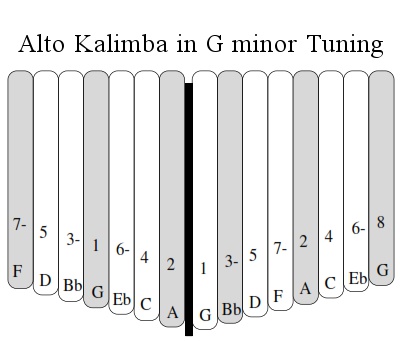 The G minor tuning is conceptually very close to the standard G major tuning. Every note that is present on the standard G Alto is also on this kalimba in the same place with the same letter, but the F# is now F (F also called F natural), the B is now Bb (B flat), and the E is now Eb. (By the way, these are the same basic changes that must occur to turn a G Treble into a Bb Treble.)

It is instructional to compare the G Major tuning with the G minor tuning. The root (1), the 5th, the 2nd, and the 4th, i.e., the most important notes for chord progressions in any particular key, are the same for G minor as for G Major. The G minor tuning has a flat or minor 7th (designated as 7-), a flat or minor 3rd (3-), and a flat or minor 6th (6-). The notes that are changed in this retuning do cause a pronounced change in the emotional flavor of the scale.

Why would you want this tuning? To more completely understand and experience the minor key, with the psychological advantage of having the root note of the minor key in the bass. G minor also goes with Bb major, so this would be a good kalimba to play with the Bb Treble. 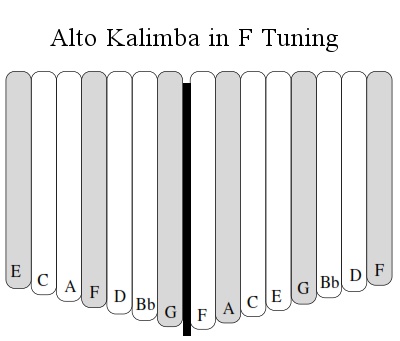 The F tuning is made from the G tuning by simply tuning every note down by a whole step. The role each tine plays in this scale – that is, the 1, the 5, etc., do not change, so anything you learned on the G Alto will be easily played on this tuning, just a step lower. And unless you have perfect pitch, you won’t even realize this instrument is different from the G Alto, since it seems to play just the same as the standard G tuning. 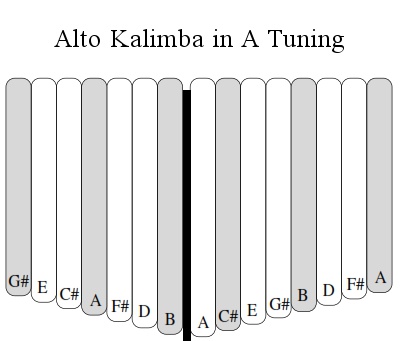 To tune to A major, every tine on a standard-tuned G Alto is pushed in just enough so that the whole instrument rises a whole step in pitch. Just as with the F Alto, unless you have perfect pitch you will not really even realize this kalimba is different from the G-tuned Alto. Every song you play on the standard G Alto can be played on this kalimba, it will just sound a step higher.

In addition to F, G, and A, the Alto kalimba can also be tuned to E, F# (Gb), and G# (Ab). Why don’t more people get their Altos tuned down to E, a great key in which to play along with guitar? The body size of the Alto is designed to resonate down to the low G note, but it starts to lose resonance at F#, more in F, and more still in E. You can compensate for this by playing in a gourd or on a table – a larger resonant structure that will help amplify the lower notes. Playing through a pickup also helps with the reproduction of notes from the low range of the kalimba.

Mark Holdaway has been playing kalimba for over 30 years. He invented his kalimba tablature in 2004, and has been writing books and instructional materials for kalimba ever since. His business, Kalimba Magic, is based on the simple proposition that the kalimba is a real musical instrument capable of greatness. Mark's kalimba books are a down payment on this proposition.
PrevPreviousLearn 17-Note and 10-Note Kalimbas: Live Facebook Event Friday Sep 23, 3-4 MST
NextAlternate tunings for the Pentatonic Kalimba?Next