Alternate tunings for the Pentatonic Kalimba?

Are there alternate tunings for the 11-Note Pentatonic Kalimba? 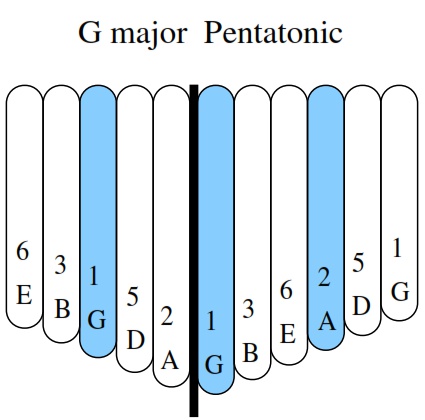 The letters on the tines are the names of the note each tine is tuned to. As G is the root, its role in the music is as the “1”; D is the “5” of the scale. Note that the 4th and 7th are missing. With a little practice, you should be able to see the “1 2 3” and sing “Do Re Mi”… but this tuning skips “Fa” and jumps straight to “So”. By paying attention to the numbers, you can understand how the scale goes and how to use it musically. 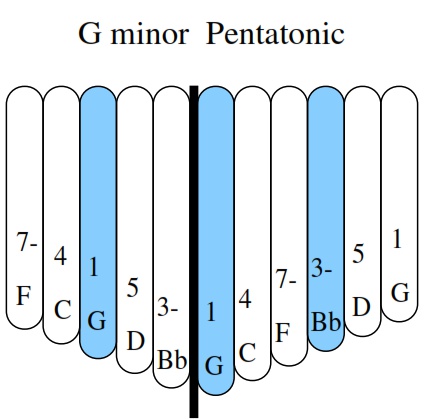 One of the easier and more obvious alternative tunings for your Pentatonic Kalimba, the minor pentatonic scale has recently become popular because of the Native American Flute. It’s a great scale to jam on and you can have plenty of fun without any instructional material, but if you want some guidance, the second half of the book
Playing the Pentatonic Kalimba works for this tuning. This kalimba will work with the Bb Treble Kalimba or any G minor tunings. 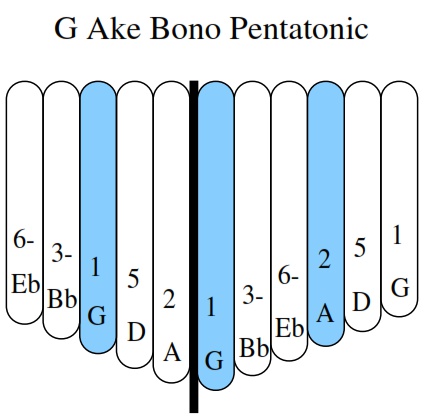 The Ake Bono scale is a Japanese minor pentatonic scale. The song “Sakura” is written in this tuning. The interesting thing that makes this tuning different from the other pentatonic scales that we have discussed is that this scale has two half step intervals (from 2 to 3- and from 5 to 6-) and two intervals that are each two whole steps (3- to 5 and 6- to 1). It is very closely related to the standard G major pentatonic scale – you just tune the B and E down to Bb and Eb. This is a very mystical and beautiful scale.Listen to This Kalimba Tuning 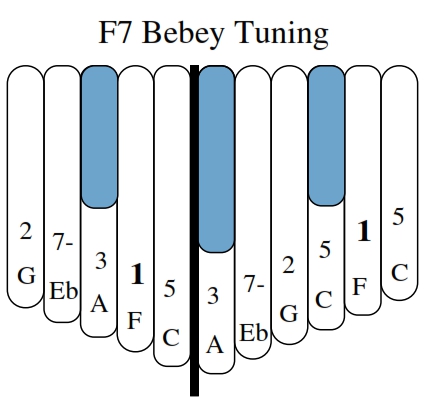 This tuning is found on Cameroonian music legend Francis Bebey’s song “Breaths”. I don’t know anything more about it other than that.
Francis Bebey tended to use a different kalimba tuning for each of his songs. He would lay down a flourish of kalimba notes in an introductory solo, followed by a groove established by the kalimba. The rest of the band – drums, bass, guitar – would then come in on top of the kalimba groove. The kalimba groove would stay constant for the rest of the song.

The musical example of this kalimba uses more of a “solo kalimba” approach throughout the piece. 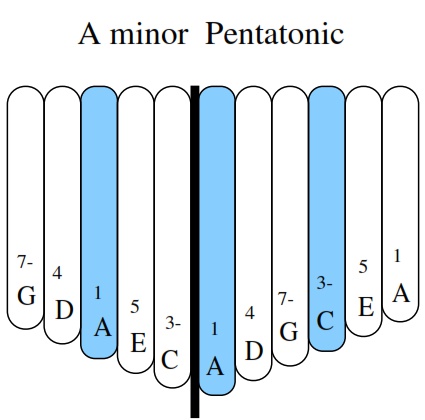 The A minor pentatonic scale has the same degrees of the scale (that is, the numbers) as the G minor pentatonic scale, but it is shifted up a whole note in pitch. As such, it will still work with the second half of the book Playing the Pentatonic Kalimba. This kalimba will work with other kalimbas in G major tuning, other kalimbas in A minor tuning (such as Maurice White’s Evil Tuning on a Treble or Alto), and the standard A minor Sansula tuning. 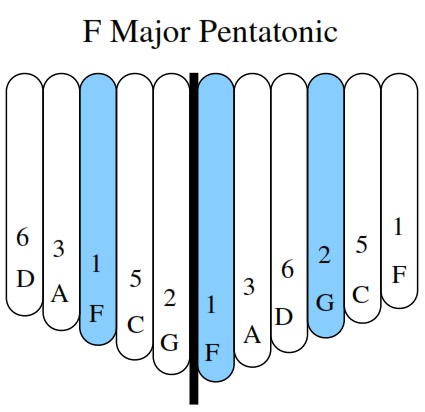 This F Major Pentatonic tuning is just like the standard G Major, but every note has been shifted down by a whole step. All of the relationships between the tines remain the same when retuned in this way. We can actually retune to F, F#, G#, A, or Bb in this manner. 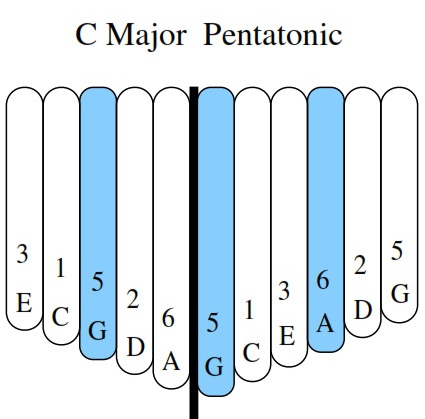 This is very close to the standard G Major Pentatonic tuning – the two B tines have been pushed in a half step to make C, which becomes the root note. Having the 5th in the bass is always a good alternative to having the root note in the bass. This tuning will work with the
numbers-based book 6-Note Pentatonic Kalimba Songbook. Of course, this tuning will work well with any of the Catania kalimbas in their standard C tunings, or with any instrument in A minor (such as the Sansula in standard tuning).

Mark Holdaway has been playing kalimba for over 30 years. He invented his kalimba tablature in 2004, and has been writing books and instructional materials for kalimba ever since. His business, Kalimba Magic, is based on the simple proposition that the kalimba is a real musical instrument capable of greatness. Mark's kalimba books are a down payment on this proposition.
PrevPreviousAlternate tunings for the Alto Kalimba?
NextAlternate tunings for the 8-Note Kalimba?Next