Its amazing music puts you in the headspace of Ancient Africa

One of the most important things I can say about the kalimba (including the karimba and mbira) is that the understanding of how to play these instruments comes to dwell in my thumbs, while the interpretation of the music into phrases or pulses takes place in my ear or my head.

The brain’s frontal cortex is where we slowly puzzle out the music when we’re first starting to learn it.  But once we get rolling, it is a different, more primitive part of the brain that is making the music happen – I am guessing it is the cerebellum, which deals with motor control and procedural learning – and that would include learning and playing karimba music. And that is why we can think and talk about something entirely different while we tie our shoes or brush our teeth.

When I play karimba, it feels as if my body is in tune with the ancient Africans when they played similar music, and that my thumbs come to know the way, all on their own.

All over Africa, hundreds of different types of kalimba, karimba, and mbira were created and used. The image below gives you an idea of some of the highlights of the history of the kalimba and shows some of the main known instruments. The dates are approximate. It is not known if the raffia-tined bamboo kalimba gave rise to the metal-tined “original mbira,” or if these instruments were invented independently on opposite sides of the African continent. I am guessing the uncertainty in the dates is a few hundred years. The uncertainty of the 1000 BC date for the raffia kalimba is larger. 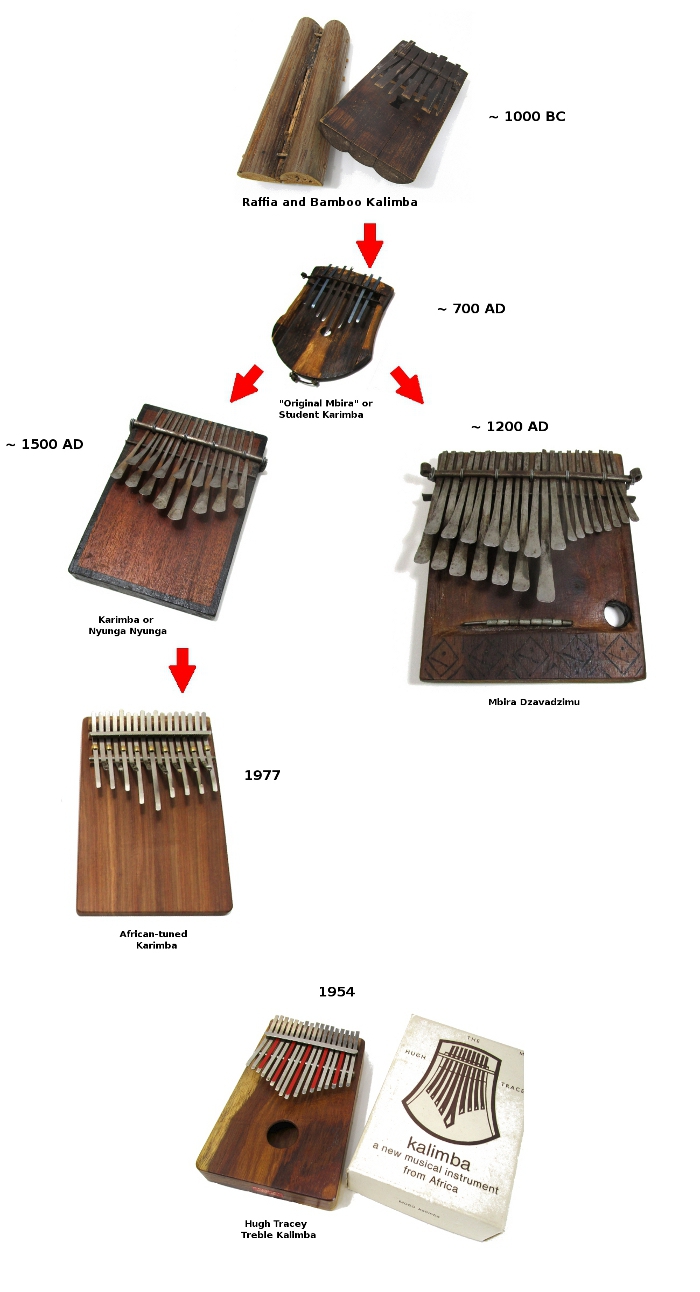 If you play the African-tuned karimba, you will find that a lot of the songs start out using just the notes on the lower row, which are the same notes as the “original mbira.” Of course, I love to add sparkle by creating variations that utilize melodies and counterpoint on the upper row notes. But the most basic forms of most of the traditional songs reside in these lower-row notes, and when I play these melodies, I sometimes feel transported to a distant land at a much earlier time.

And when I play the ancient songs on these instruments, I rejoice in the knowledge that there have always been genius minds, in every age, in every land. In my opinion, the karimba / mbira / kalimba was perhaps one of the highest things created by ancient African civilizations, the best to come from the ancient African mind. The traditional African lamellaphone is a thing of beauty, a playful and creative musical instrument. The musical forms that co-evolved with these instruments can uplift and sooth, entrancing and transforming those who listen and those who play it.

Evolutionarily speaking, the mbira and the karimba separated centuries ago. While their musical forms are related, they have also been distinct… a main feature of traditional mbira music is its four-phrase music which is meditative and trance-inducing, while karimba evolved using two-phrase music, and it is simpler, more upbeat, party-type music. Among other contemporary musicians who have begun crossing over and borrowing between these two genres are Dumisani Maraire and Ephat Mujuru, who put together a CD, “Shona Spirit” in 1996 that blended karimba and mbira music into new forms. And mbira-oriented dance bands often include high-spirited two-phrase karimba pieces as crowd pleasers.

In the book “About 30 Traditional African Karimba Pieces,” among the two-phrase karimba repertoire I include some four-phrase mbira pieces. There are many purists who help maintain the integrity of these traditional instruments’ music and the spiritual, intellectual, and cultural ties to the past. I feel that the story of the karimba / mbira / kalimba is also a story of great innovation, and interweaving the threads of this beautiful tapestry is what I myself love to do.

If you have a kalimba (or even if you don’t) and you are ready for a more African experience, consider getting a 17-Note African-tuned Karimba or a 9-Note Student Karimba, and check out one of the instructional resources we have available for these instruments.

For a tiny fraction of the cost (in money, time, and environmental impact) of traveling to and touring Africa, in a kalimba you can get a piece of modern Africa that reflects the soul of an ancient African instrument. And perhaps you too will come to have the experience of being transported in space and in time, to Africa, to the past.

Mark Holdaway has been playing kalimba for over 30 years. He invented his kalimba tablature in 2004, and has been writing books and instructional materials for kalimba ever since. His business, Kalimba Magic, is based on the simple proposition that the kalimba is a real musical instrument capable of greatness. Mark's kalimba books are a down payment on this proposition.
PrevPreviousTablature for “Karimba Walk”
NextGoing Low: Chords with the 5th in the BassNext