Going Low: Chords with the 5th in the Bass

Making a chord is simple on a diatonic kalimba: Pick the note you want the chord to be based on – let’s say C – and then play that note and the next two shorter tines on the same side of the kalimba. Those three tines will make a triad with the notes 1 – 3 – 5. Will it be major or minor, or even diminished? It depends on which key you are in and what note you started on – but it will always be a beautiful chord.

(“Diatonic” means your kalimba plays only the notes Do Re Mi Fa So La Ti Do in some key [with no notes outside of the key], for at least an octave, likely more. Diatonic kalimbas include the Hugh Tracey Alto and Treble kalimbas, or the 10-Note and 17-Note Heart kalimbas.)

This post is about an important strategy to get you to low notes on your kalimba without fundamentally changing the harmony.

Here are the quick takeaways from this article: Chords are easy on kalimba because they generally use adjacent tines; lower notes are toward the center of the kalimba on the longest tines; and if you are playing a chord in the middle of one side, or high up on one side, you can usually add some depth to the chord by adding a lower note on the opposite side.

Here is the issue: the kalimba is not a low instrument, with a range similar to the mandolin. Both kalimba and mandolin can play chords just fine, but they are played with higher notes than, say guitar or typical piano. The method offered here will help you get the lowest notes you can on kalimba, lower generally than the low note of a triad chord.

Why do you want low notes? They are more bass-like, they help define the chord progression better, and they are grounding and supportive of the music in general. It’s a “psychology of music perception” kind of thing. Just like higher notes are often much nicer for the melody.

By the way, even though the tablature and note names here are specifically for the Alto kalimba, the tablature (and the concepts) also work for the 17-Note Kalimba in C. Any note names need to be shifted up a 4th (for example, G becomes C, A becomes D, B becomes E… and F# becomes B). 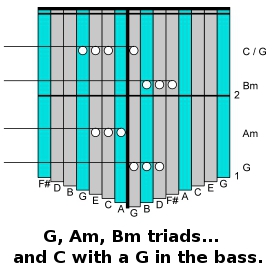 Consider the diatonically-tuned Hugh Tracey Alto kalimba in G. If you play the lowest three notes on the right, as in the tablature diagram, they are G – B – D, the 1 – 3 – 5 in the key of G. What a great chord! Easy, and low on the instrument to support the music. (A 17 Note Kalimba in C plays C – E – G in the same lower-right tine positions.)

You can play the three-note triad by plucking the tines one at a time in quick succession (it sounds like “Jane, his wife” if you’ve ever heard “The Jetsons” theme song). You can also play a glissando by sliding your thumb nail across the three adjacent tines.

The tab here shows four triads going up the scale: G, A minor, B minor… and C. The G, Am and Bm utilize the lowest notes possible for those chords. If you just played the triad for the C chord, or C – E – G on the left side, you would not be as low as you could go. You see, the top note of the C triad is G, but the Alto kalimba also has a low G. The notation “C / G” to the right of the tab column indicates it is a C chord, but it has a G in the bass.

As G is the 5th of the C chord, we can also say the 5th is in the bass (ie, the lowest note). When you “put the 5th in the bass” on a diatonic kalimba, it will be played by the thumb on the opposite side (from the triad) of the instrument.

Usually, the root of the chord is in the bass. This is the case for the G, Am, and Bm chords.

Harmonically, playing a triad and playing a triad with the 5th in the bass are almost identical. Generally, any song you have that requires a specific chord, can also handle that same chord with the 5 in the bass. Putting the 5 in the bass does have a particular use in western music theory, signaling you are about to cadence and come to a pause or stop as specified by the harmonic changes. I also think adding the 5 to the bass makes the chord sound more African, as 4th and 5th intervals are common in African music.

It can sometimes be confusing to a bass player if the lowest note is not the root note. Many people assume that the lowest note is the same as the root note of the chord… and they would usually be correct. Anyone with an instrument that can go two octaves lower than your kalimba can afford to play the actual root of a chord… but sometimes on the kalimba, a little instrument with a big heart, you will want or need to put a different note from your chord in the bass.

Higher Triads, Made Lower By Adding a Low 5 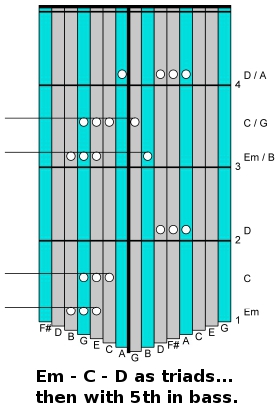 Measure 1 of this second bit of tab shows three triad chords that are higher up on the kalimba: Em, C, and D.

Measure 3 plays the same three chords again, but adds the 5th in the bass, and it’s on the opposite side of the kalimba. Understand that the 5th is also the highest of the three notes in each triad, and we are here doubling that note an octave lower. The 5th of the Em chord is B, and in the Em / B chord in measure 3, there is a low B on the right side below the E – G – B triad on the left side.

I’ve said this gives more support to the chord, and that it grounds the chord. Another way to say it is that these lower notes just give the chord more “umpf!” Part of that “umpf” is about the low note being lower, but on the kalimba, a good part of that “umpf” derives from the fact that you are executing the chord with both left and right thumbs together. Physically and psychologically, the double-fisted chord just has more force.

The video at the bottom of this article uses the same chords presented above: Em, C, and D, with the 5th in the bass. What’s different in the video from the “instructional presentation” above? 1) The chords in the video are not strummed all at once, but are arpeggiated… yet each arpeggio starts with the root and the low 5th, one on the left and the other on the right. 2) The actual chord progression in the video is slightly more complicated – here it is:

Inverted Power Chords, Without the 3rd 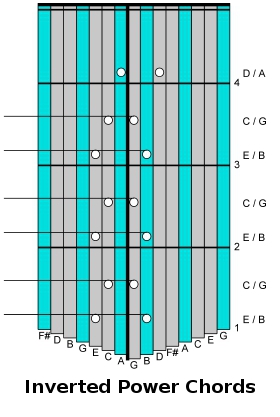 The tablature here shows these inverted power chords. Without the triads above, they are missing the 3rd of the chord, so we don’t know if they are minor or major – part of the “power” of the power chord. They have the power of being able to blend well and work with either major or minor chords.

So, next time you are playing ‘way high up on your kalimba, wishing for bass notes, you could run to the nearest bass or guitar player and try to get them to play with you, or you could whip out the 5th of the chord, lower down and on the opposite side of your kalimba, and make your own low notes.

If you don’t already know about putting the low 5th in your chords, this simple but powerful technique could transform your kalimba playing.

Mark Holdaway has been playing kalimba for over 30 years. He invented his kalimba tablature in 2004, and has been writing books and instructional materials for kalimba ever since. His business, Kalimba Magic, is based on the simple proposition that the kalimba is a real musical instrument capable of greatness. Mark's kalimba books are a down payment on this proposition.
PrevPreviousWhy Get an African-Tuned Karimba?
NextMy Personal Experience Using Alaska PiksNext