You can totally learn how to play this song!

One of my good habits is to walk about 2 miles every morning while I play kalimba. This is time by myself, with the sky above me and the earth below me. It is time with a kalimba in my hands and a song in my heart. It is an essential element of my mental, physical, and spiritual wellness.

Most mornings, I stick with one song for most or all of the walk. I find the song deepens as my walk proceeds. On good mornings, I get an entire new song. And sometimes, I record them.

“Karimba Walk” is a syncopated walking-tempo song that I play here on the Hugh Tracey African-tuned Karimba, in the style of traditional African two-phrase karimba music. And now you can totally learn to play it too!

There are so many juicy details about karimba music here – if you play African karimba, this is a “must read.”

In this music, a cycle is made up of 8 measures, or one column on the first page of tablature in the diagram. The first and second phrases are marked with the large brackets to the right (outside) of the first column.  Each phrase is actually made up of two chords, and each chord lasts for two measures. The chords are labeled in the middle of the tablature, and each two-measure chord segment is indicated by the smaller brackets outside of the first column of tablature. 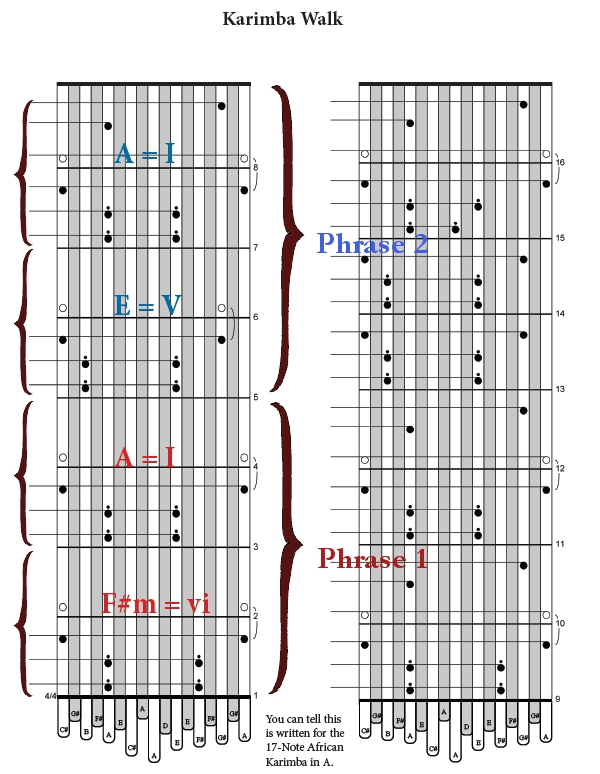 Click on the tablature above to download the full 7-page PDF tablature for the “Karimba Walk” song.

A word about the chord symbols such as A = I. The chord letters refer to the chords for each two-measure segment. If you know about chords, you will see the notes played in measures 3 and 4 are A, E, C#, and another A – the notes of the A major chord.

Another way to think of chords is in terms of their position in the key, which is referred to as Roman Numeral Chord Symbols. This karimba is tuned to the key of A, and this song is in the key of A. In the key of A, the A chord is the I chord. The F#m chord is the vi chord, a lower case Roman numeral 6, because it is a minor chord.

Isn’t it remarkable that 1000 year old African music has harmony that can be described by Western music theory? To me, this speaks to an essential unity of music across world cultures.

Note that phrase 1 and phrase 2 start on different chords, but end on the same chord. Think of the first phrase ( F# | A ) as a few words like: “Walk this way? | Yes Yes Yes” – and the second phrase ( E | A ) like: “Walk all day? Yes Yes Yes”. The two phrases mirror each other, in chords, in the rhythm, and in the melody.

Do you hear the rhythmic footsteps in the video? They occur at the 1 and 3 beats of each measure. This is an example of “cut time” which basically makes it a lot easier to count when the timing is quite rapid.

I have laid out this tablature to emphasize the cycle structure. On pages 1, 2, and 7 in the tablature, each column is a complete cycle. On pages 3, 4, 5, and 6, the music gets more intense with more notes, and we spread the measures out a bit more such that one cycle of the chord progression (still 8 measures) fills the page (two 4-measure cycles per page).

In case you missed it, organizing the cycle breaks to match column breaks or page breaks makes the tablature much easier for you to follow. You can print out one page at a time and just sit with that page, playing it over and over again until your thumbs learn the way on their own.

Usually in traditional two-phrase music, each cycle is repeated several times before advancing to the next variation of the cycle. In my video, I recorded a song that is iteratively but continually changing – that is, I do not repeat any of the cycles, but add to them each time. But it is probably a good idea for you to repeat each 8-measure cycle several times as you get better at playing it before you move on to the next cycle.

By the way, the chord progression vi – I – V – I  is the same as the standard two-phrase progression, but it starts at a different spot than a typical progression of  I – vi – I – V.

This is how the two progressions are related: Two of the standard progressions are strung together: I – vi – I – V – I – vi – I – V. By starting my four chord cycle on the 2nd chord, or vi, and taking the I chord of the next cycle as the last chord or my new cycle, you can clearly see how my progression is derived from the standard progression. (Remember, the Roman numerals indicate position of a chord relative to the root note; and if in lower case, it is a minor chord, and upper case is a major chord.)

I am not the only person to use this method (changing the starting spot of a chord progression) – it is a standard trick for making/deriving new songs in traditional African music.

The first two pages of tablature do not use the upper-row tines (represented as gray columns) at all, which means you can play the first two pages of tablature on a student karimba. In a scholarly paper, Andrew Tracey has called the lower row of karimba tines the “kalimba core” and the “original mbira.” There are many traditional karimba songs that start on the lower-row tines, and then branch out to include variations that use the upper-row tines, which is consistent with Andrew Tracey’s asserting that those lower-row tines are the original tines from when the instrument was first created in Africa, perhaps as long as 1300 years ago.

And that is one of the reasons why I love playing karimba – I cannot play it without projecting my mind into the intellect of ancient African players over 1000 years ago. And I remember that Africa is the source of most human civilization, and a lot of the world’s music. Descendants from this amazing wellspring of music are walking around in the world right now. I am awed by knowing there are folks with that heritage in my day-to-day life now. One of my missions is to respect people of African ancestry as I meet them. Who knows? Their ancestors could have been among the ones who created the “original mbira,” or the ones who added the upper row of tines to the karimba, or the ones who created and added to some of the songs of the karimba. If so, they are the descendants of royalty.

Mark Holdaway has been playing kalimba for over 30 years. He invented his kalimba tablature in 2004, and has been writing books and instructional materials for kalimba ever since. His business, Kalimba Magic, is based on the simple proposition that the kalimba is a real musical instrument capable of greatness. Mark's kalimba books are a down payment on this proposition.
PrevPreviousNew Easy-to-use Download for 17-Note Kalimba in C
NextWhy Get an African-Tuned Karimba?Next