Six Modes to Expand the Emotional Expressiveness of your Kalimba

Each different mode is like a totally different instrument. Don’t you want to unlock that power?

How different can the scales be?   Here are my descriptions of each of the modes: Mode 1: happy.  Mode 2: dark, but jazzy and sophisticated.  Mode 3: dark and middle eastern sounding, exotic.  Mode 4: angelic. Mode 5: Jerry Garcia in 1969.  Mode 6: melancholy and serious.

First, each scale or mode is a set of typically seven notes that work together in some way, and you can create melodies and harmonies out of the notes in the scale.  Each different scale is like a collection of “the right notes” for some type of music.  The scales are important in that they give us the basis for some music that we might create.  Different types of scales will result in different types of music.

The scales and arpeggios (that is, chords played one note at a time) for each mode are presented below for the Alto kalimba.  If you don’t have an Alto kalimba, this is still a meaningful exercise, but you will have to figure out how to modify these concepts to the exact notes that you have.  For example, if you have an 8-Note kalimba in C, you can still get the dorian mode by starting on D, the second note, but you cannot play a full octave of the D dorian scale.  You can still use the dorian mode in your playing, but you will be somewhat limited. 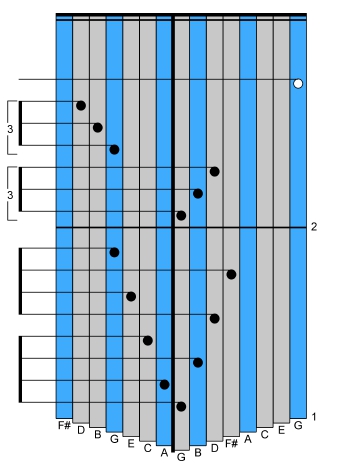 The Alto kalimba was designed to be able to play exactly two octaves of the G major scale. We start on the lowest note, G, and alternate right, left, right, left all the up the scale. Each of the scales (or modes) we present in this post will also alternate between right to left to ascend or descend. However, each different mode will start on a different note, sometimes on the left and sometimes on the right.

The first measure shows the ascending scale, and the second measure shows an arpeggio, outlining the G major chord.
Most music you know will be in this major mode. 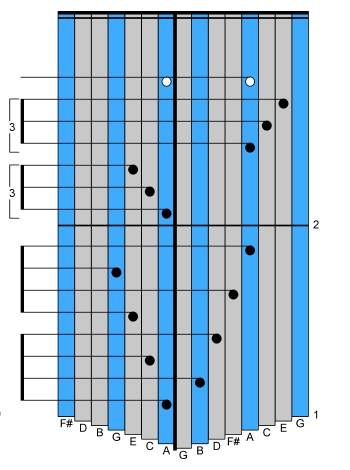 The dorian mode is a minor mode with a twinge of major left in it. To me, it sounds like cool jazz in a dark night, or perhaps an old folk song. There is something sophisticated about it.

The A dorian mode contains all the notes in the G major scale, but you make this mysterious mode simply by starting on the second lowest note of the kalimba – A – instead of the lowest – G. The first measure is the A dorian scale ascending one octave, and the second measure is an A minor arpeggio. 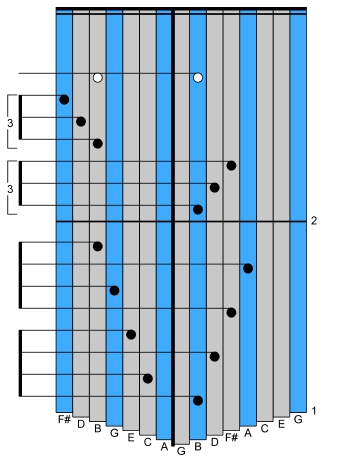 The phrygian mode is also a minor mode, but there is no “majorness” left in it. The 2nd note of the scale, C, is only a half-step above the first note, B, which gives this scale a distinct Middle-Eastern feeling to it. Exotic!

The B phrygian mode contains all the notes in the G major scale, but you make this mode simply by starting on the third lowest note of the kalimba – B – instead of the lowest – G. The second measure outlines the B minor chord. 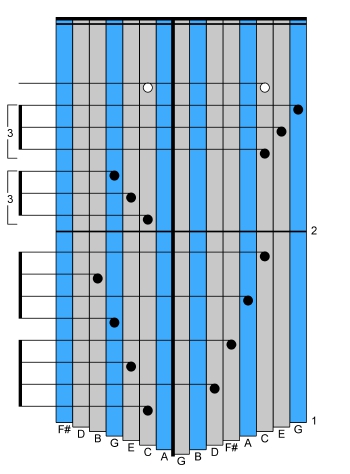 The lydian mode is a major mode with a twinge of extra delight in it. This scale is just like a regular major scale, but it has a raised 4th (F# – should be an F natural in the normal C major scale). To me the raised 4th is both unsettling and angelic

The C lydian mode contains all the notes in the G major scale, but you make this sweet mode simply by starting on the fourth lowest note of the kalimba – C – instead of the lowest – G. 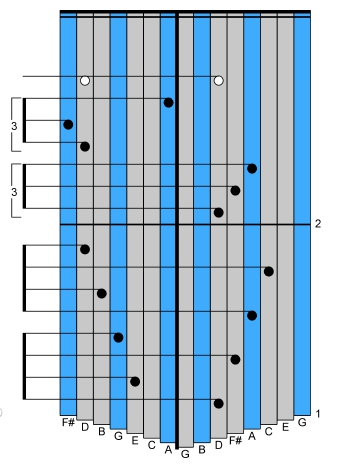 The mixolydian mode is a major mode with just the first hint of minor left in it. To me, it sounds happy, due to its similarity to the major scale. The minor 7th (C instead of the C# that is usually in the key of D) gives this scale a hint of ethnic flare, a hint of jazziness. This was Jerry Garcia’s favorite mode.

The D mixolydian mode contains all the notes in the G major scale, but you make this funky mode simply by starting on the 5th lowest note of the kalimba – D – instead of the lowest – G. 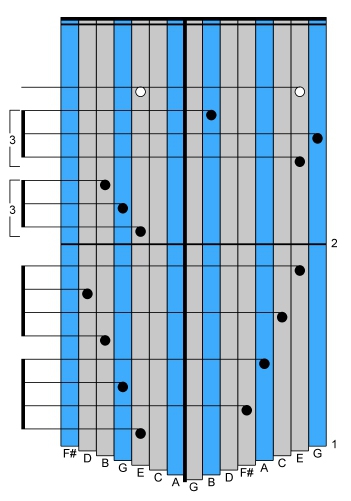 The natural minor scale, or aeolian mode, is a minor mode. In my mind, it is a pure minor, with no hint of majorness left in it. It is melancholy and serious, yet feels somewhat exotic. As the natural minor is used in a lot of pop and rock music, it will feel very familar, and is probably the second most common scale behind the major scale.

The E minor scale contains all the notes in the G major scale, but you make this mysterious mode simply by starting on the 6th lowest note of the kalimba – E – instead of the lowest – G.

Hey, I like diminished chords as much as the next guy, but I don’t really like the locrian mode, and I hardly ever use it, so I am leaving it out!
Do know that you can make it on the Alto kalimba by starting on F#, the seventh note of the G major scale.

By leaving out the scale that I don’t ever use, I hope you get the inverse message loud and clear: each of the other six modes I have presented above are very useful.
They are fantastically easy to play and easy to learn and easy to work with, and they will greatly expand the emotional palette of your kalimba.

Next time, I will present these same modes in a totally different order that illustrates a different take on the circle of fifths and gives you a new way to understand the modes.  After that I will share short musical compositions for each mode.  And after that?  I think you should create your own composition using one or more of the modes you have just learned about.  In other words, get ready for another kalimba contest!

Mark Holdaway has been playing kalimba for over 30 years. He invented his kalimba tablature in 2004, and has been writing books and instructional materials for kalimba ever since. His business, Kalimba Magic, is based on the simple proposition that the kalimba is a real musical instrument capable of greatness. Mark's kalimba books are a down payment on this proposition.
PrevPreviousLearn to Read Tablature – 2
NextWhat Are People Saying About Kalimba Magic?Next