This one plays in four different scales, without retuning a single note 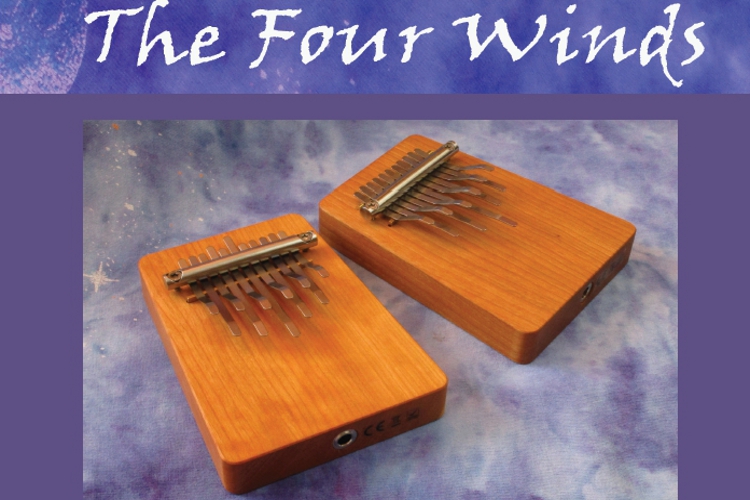 Get yourself a B11 Kalimba today!

I love to fall in love. Who doesn’t? Yes, it is a bit chaotic, and your plans might go out the window, but the blissful feeling of falling in love? Of discovering and sharing each’s inner secrets?

That is why I devote myself to exploring new exotic tunings on the various kalimbas – because each new tuning is an opportunity to fall in love.

I can’t really tell which kalimba or tuning I will fall in love with, but I know it when it happens. All of a sudden, I understand, and the movement of my thumbs on the tines starts to flow, and we are working as one.

I just fell in love with the B11 “Four Winds” tuning, and I feel happy to be able to present to you four opportunities for you to do the same, all in one kalimba.

Just a reminder: at Kalimba Magic laboratories, we gathered up and played all the B11 tunings we could think of – and then selected the five best of all those tunings. For five months, we will present a new exotic B11 tuning, including a recording or video and a short instructional download for each one. Last month, we featured a Middle Eastern scale I called “The Wizard.” It has a very exotic, ethnic scale, but really, there is only one key it could play in – only one path the chords and notes naturally followed.

The “Four Winds” tuning of the B11 Kalimba is not as inherently exotic as “The Wizard,” but it is full of possibilities, in fact, four paths for playing four very different-sounding types of music. The “Four Winds” theme song playing in the media player below takes you among those different routes. 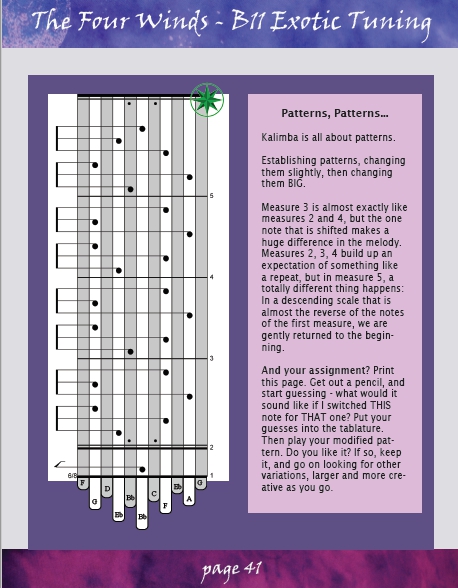 The “Four Winds” tuning was named to reflect the different modes that it played, more or less with equal ease:  Bb Major (East Wind),  Eb Lydian (North Wind), F Mixolydian (West Wind), and G Minor (South Wind). Playing in each of these four modes brings a different ethnic flavor to your music. Like having a four-scoop ice cream cone, each scoop a different flavor.

The “Four Winds” B11 download is an intermediate level, 58 page PDF, instructing via graphic kalimba tablature, words and advice, and with 55 MP3 files, all linked-to and easily clickable within the PDF. The music, in tablature, comes in 4-8 measure chunks which form bite-sized cycles that fit on one page. The cycles are repeated to create a song. Longer songs are built up by introducing variations into the cycles, or by switching to a complimentary cycle.

To me, the Bb Major (East Wind) is the most vanilla mode, meaning the most commonly used and standard one, but the way this scale sits on the B11 kalimba prevents me from doing my “old tricks” and forces me to confront new musical possibilities. I love it! The Eb Lydian mode (North Wind) sounds angelic, and makes me think of Celtic or Scandanavian. Perhaps Elvish music. The F Mixolydian mode (West Wind) is folk, Latin, Celtic, and psychedelic 60s music. Cool and groovy! And the G Minor mode (South Wind) is Mexican or Spanish. That is a pretty good tour of the world through imagination and music. Lovely!

You have several options for enjoying The Four Winds B11 tuning: you could retune your own B11 and then purchase the Four Winds’ beautiful 58-page instructional download. You could send your B11 kalimba in standard tuning to the Kalimba Doctor, and we’ll retune it for you and send it back. Or you could purchase a new B11 or B11 Elektra kalimba in the Four Winds exotic tuning, and we’ll include the instructional download as a gift.

And if (or when) you get tired of playing the “Four Winds” B11 kalimba?  You can easily switch to another exotic tuning and be on a brand-new journey through the new tuning’s novel and captivating lands.

Be on the lookout for other exotic B11 tunings soon. We’ll write a blog post and an instructional download for each one. At the end of the series, we will present them in a grand book containing all of the exotic B11 tunings. Even if you can’t afford to take a real trip around the world, you can certainly take the musical trip through time and fantasy that the B11 Exotics have to offer.

Mark Holdaway has been playing kalimba for over 30 years. He invented his kalimba tablature in 2004, and has been writing books and instructional materials for kalimba ever since. His business, Kalimba Magic, is based on the simple proposition that the kalimba is a real musical instrument capable of greatness. Mark's kalimba books are a down payment on this proposition.
PrevPreviousNew In Stock – The 17-Note Heart Kalimba in C
NextKTabS (Kalimba Tablature Software) Works in Windows 10!Next