Just by shifting the starting point of the scale by one note, we are going to show you how to create a totally different scale on your kalimba.  Instead of G major on the Alto, we will play a type of A minor scale.  Whatever kalimba you do have, this post can open doors for you too, so read on.

The cool groove music you are hearing is the G Alto kalimba, but played emphasizing the A (and not G) as the root.  This music is in the Dorian mode – one of many possible modes.  Modes can have a huge influence on the way music feels to the listener.  See the link near the bottom of the page for an the article that discusses and illustrates six different modes on the Alto kalimba.

I have heard this complaint from a lot of people: “The kalimba isn’t a real instrument – everything you play on it sounds the same.”  That is surely an ignorant complaint, as I can play a thousand songs and a thousand different colors on my kalimba.

But there is an important point behind this complaint – many people learn one mode of playing and never break out of that.  But today, I will shift your understanding by just one tine, and show you an entirely different way to play on your Alto kalimba,  Even if you don’t have an Alto, you may very well be able to use this method to expand your playing.

Putting the root note of the scale at the low(est) note on a kalimba is psychologically powerful.  You know exactly where to start if you are going up the scale (it’s the longest tine).  The lowest note being the root note makes it the most stable note on the kalimba.  Even if you don’t know much about music, you are still naturally drawn to that note.  If a player is confused and doesn’t know what to do, they just tend to go to that note, emphasizing the key.  Kalimbas that put the root note elsewhere on the kalimba tend to be confusing to the player.

The standard Hugh Tracey Alto kalimba comes in the key of G.  It has 15 tines and covers two octaves of the G major scale, and both the lowest and highest notes are G notes.  Its note layout strongly pushes you in the direction of the key of G.

But you can have your G Alto act in ways far different than its original setup dictates: the exact same set of notes can play in an exotic A minor scale simply by moving one note to the left and using A as the root instead of G. As you can see in the graphic above, the low A is just to the left of the low G.  One octave up in the photo, the next A is the painted tine on the right side, while the next G is the painted tine on the left side. That is, in going from G to A, we had to flip sides.

Now, starting on the low A, play up the scale alternating left-right, until you get up to the next A, and go back down.  If you accidentally play that low G, just let it spring you back to the low A right next to it.

The A scale, when played with the notes of G major, will be a minor scale.  It is called the Dorian mode, and is different from other minor scales.  It has a kind of jazzy feel. And because it’s is so easy to play, you should really explore it. 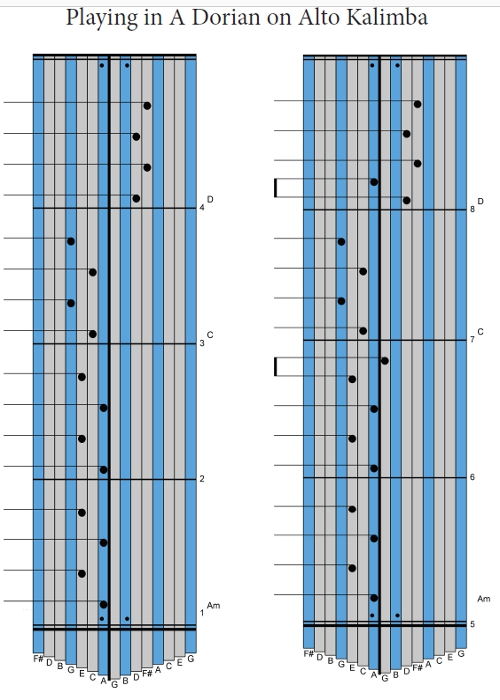 The tablature above is a learning exercise to help you play the first riff in the recording that is playing in the background. Most of that song has a cyclic chord progression: the chords repeat ||: Am | Am | C | D :||.  There are four exercises in all – two variations illustrated in the above image, and two more in the full two-page PDF that you can click to download free. These exercises are slowly progressing stepping stones, starting out simple and increasing in complexity. You can play any of them with the whole song. The idea is to start with the simplest and as you get more proficient, move on to the next exercise that has a bit more going on.

Any variation you learn in this download – the very first exercise made up of just quarter notes, for example – will work with any of the variations I play in this song.

Note that the D chord in the song is a D major.  Most minor scales would have used a Dm (D minor).  This D major gives the Dorian mode its particular jazzy feeling, and is lighter that a straight minor.

Also notice: this music really emphasizes the root (1) and the fifth (5) of each chord.  The root of the Am chord is A, and the 5th is E.  (A B C D E = 1 2 3 4 5).  The first two measures are just A and E.  The third measure is C and G, the 1 and 5 of the C chord.  Notice how this is essentially the same as the approach used in the “Simple Mbira Music for Alto Kalimba” blog post – that is, both western music and African music employ the 1 and 5 to outline chords.

This music emphasizes that the A note is the root note in this music in some important ways.  One way is that we start on the A note, right at the first beat of the song.  The heavy use of the 5 note, E, in the first two measures also points to A as the root note. How else can a note be emphasized as a root note? Think about that.

Just a side comment here: I know I tend to be pretty cerebral.  Not every kalimba player comes at their playing this way; you might rely more on your ear and intuition. If all the chord names, numbers and theory don’t mean that much to you, you can still just jam along with this music.  If your kalimba is in the key of G major, and you keep an open ear and open heart, you will naturally gravitate toward playing in A Dorian mode when playing along with this song.

Whether you approach music by rational understanding or by instinct, or somewhere in between, this song has something to teach you.  If you are open to it, you will learn.

Mark Holdaway has been playing kalimba for over 30 years. He invented his kalimba tablature in 2004, and has been writing books and instructional materials for kalimba ever since. His business, Kalimba Magic, is based on the simple proposition that the kalimba is a real musical instrument capable of greatness. Mark's kalimba books are a down payment on this proposition.
PrevPreviousSimple Mbira Music for Alto Kalimba
NextWhat you get when you buy an Alto Kalimba from Kalimba MagicNext