Home > Blog > Item > Why is Kalimba Tablature Better Than Numbers-Based?

Why is Kalimba Tablature Better Than Numbers-Based?

Kalimba Tablature can Express Essentially Any Music, and it isn’t that hard 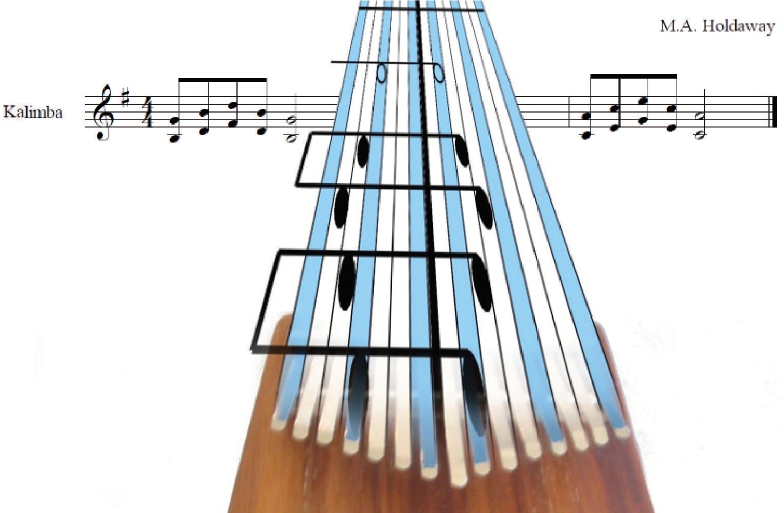 I get a lot of requests for numbers-based instruction from people who cannot read music.

While I have created numbers-based materials, they are very limiting. The world of possibilities is huge, deep and broad, and the numbers-based instructional materials can only touch the surface.

In order to achieve kalimba greatness, I suggest you move over to the graphical Kalimba Tablature. To see some of the advantages to this approach, read on, dear reader!

Many people believe they cannot handle reading music. I understand this. But they tend to also believe they need the most basic type of instruction – a numbers-based system.

And to confuse matters, many people refer to the numbers-based kalimba instruction as “KTabS” – however, KTabS is the name of a Windows program that creates graphical-based Kalimba Tablature – that is, the tablature that I invented in 2004. In ncase you are interested, I think Steve Catania, now retired from Catania Folk Instruments, was first to use the numbers-based approach.

I think the graphical kalimba tablature is pretty easy. Even if you believe you cannot do it, I invite you to give it a try.

I used to teach kalimba to 1st and 2nd graders. Basically, anyone who can track across the page to read written language can easily learn to track up the page to follow Kalimba Tablature. Yes, it might feel like typing with your toes for a while, but after a few days you will quickly “get it”. You might not master it for quite some time, but the important thing is that you will be able to look at the tablature graphic and see exactly which tines to play, in which order, and in which rhythm to accomplish a certain bit of music.

So, why am I so stuck on Kalimba Tablature (apart from the fact that I invented it)?

Another way to say it: Kalimba Tablature shows you the exact thumb strokes you must make to accomplish the song. Here are some of the ways the tablature exactly shows you how to play: 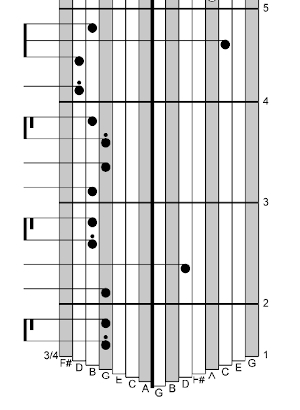 Rhythm. The numbers-based system is very limited in some important ways. First, the numbers-based approach does not describe the rhythm that you need to play to make the song sound right. This can be partially overcome if you are playing along with a sound recording or a video. However, kalimba tablature can spell out exactly how the rhythm goes. Yes, it is true that you wiill need to understand how much time a half note gets, vs. a quarter note or an eighth note. And you will also need to learn about dots and ties… but really? These are not difficult to learn. You can learn on-the-fly by getting one of the tablature based ebooks and following along with the Tablature as you listen to the sound recordings that accompany the ebooks. Or you can bite the bullet and go to the tablature tutorials we have online. 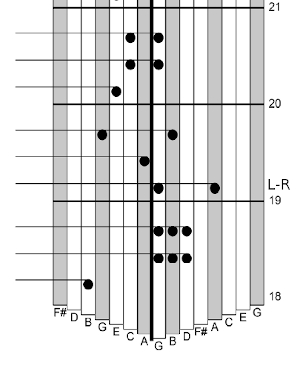 Which thumb plays which note? The Kalimba Tablature shows you very clearly which side of the kalimba a note falls on. On many kalimbas, there is a logical division between the tines the left and right thumbs usually play, illustrated to the left by the thin black line between the G and the A. A note that falls on the left side of this line is almost always played with the left thumb, and a note on the right side of the black line will almost always be played with the right thumb. However, sometimes you will have to cross over – bring your left thumb a bit over the center line and playing a note on the right (or vise versa). Why might you ever need to cross over? Well, if the thumb that usually plays those notes is busy playing an upper melody note, then your other thumb may need to cross over to play an accompanying note. When I work out that a cross over is beneficial or required, I make that suggestion to the right of the tablature with a “L” or “R” notation – or as in this example, “L – R” . 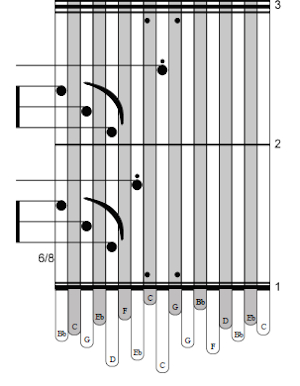 Pull-offs and Slides. Kalimbas with two rows of tines, such as the Sansula or the Karimba, sometimes will utilize the technique called the pull-off (where one thumb plucks an upper row note, slides off to the left or right, and then plucks an adjacently lower row tine. Another technique is the glissando, where you slide over several adjacent tines. I often give you hints about these motions to the right of the tablature with “pull – off” and “slide” notations… or in the case here, we make a curvy symbol to indicate a slow gliassando, sliding from “D” to “G” to “Bb” in time. The tablature is a very nice representation of what your thumbs have to do to accomplish the music. 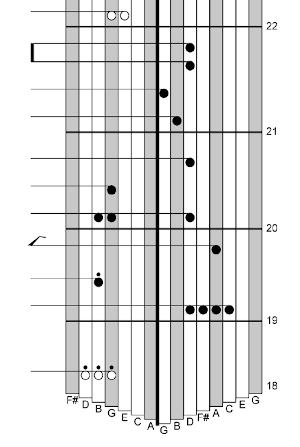 Harmony notes. Another place where numbers-based instruction falls down is when there are multiple notes being played at the same time. The kalimba is fundamentally a polyphonic instrument, and is capable of playing melody and accompaniment parts at the same time. In fact, adding chords and harmony notes is significantly easier on the kalimba than it is on, say the guitar or the piano. (By the way, where you see three or four note chords played on adjacent tines in the tablature, use a glissando to pluck them nearly simultaneously.) The kalimba, being diatonic, is somewhat limited in the harmonies it can make, but those common harmonies that it can make end up being very important and very easy indeed. And Kalimba Tablature can easily notate exactly which notes to play to fill out the harmonic sound of a song. By comparison, the numbers-based system is mainly used to direct you in playing simple single-note melodies.

In many of the books and ebooks I write, I ease you in to using harmonies – first using simple melody-only songs, then using just one or two harmony notes added in key places to the melody, and eventually filling out to three and four part harmonies over much of the song. In other words, you are not expected to immediately begin to read the most complex harmonies, but you will have plenty of practice at improving gradually.

Multiple melody lines are clearly seen in tablature. Not only can you do melody plus harmony on the kalimba, you can even do two or three melody lines at the same time, much as a good piano player or guitar player can do. As the tablature is a graphical layout of the music, you can notate these multiple lines, and you can see them weaving in and out of one another.

Paint by numbers… or paint by feeling? Any numbers-based system requires you to look at the number, translate that to the tine on your kalimba that has that number, and then play. Playing by graphic tablature is closer to looking over the shoulder of a trusted friend and seeing which tines they are playing… except that you can also see the tines you will need to play next, and after that, and compare that to the phrases you already played, to see the full structure of the song right before you. Playing with tablature is closer to playing by feeling, and the extra symbolic translation from numbers to tines is not involved. In other words, playing from graphical tablature lets you play from the right side of your brain, rather than getting you stuck in the left side of your brain. And the right side is where the deep emotion and feeling live, the things that make music really flow and shine.

If you feel that reading Kalimba Tablature is too difficult for you, I suggest you sit down and try it again. I have seen those 1st and 2nd graders using the tablature with no additional instruction. However, I have also seen concert pianists who just refuse to get their heads around the fact that Kalimba Tablature reads from bottom to top instead of left to right. Yes, if you have  60 years of training reading staff notation, I will give you a break. But if you have 60 seconds of thinking that you cannot do it? I will ask you to try again.

And I do hope that you are successful with the Kalimba Tablature!

Watch me play kalimba while the tablature scrolls up the screen.

Mark Holdaway has been playing kalimba for over 30 years. He invented his kalimba tablature in 2004, and has been writing books and instructional materials for kalimba ever since. His business, Kalimba Magic, is based on the simple proposition that the kalimba is a real musical instrument capable of greatness. Mark's kalimba books are a down payment on this proposition.
PrevPrevious“Making Friends with the Mini-7 Kalimba” – Our Newest Booklet
NextMini-7 Kalimba, Big and Small, for Intergenerational DuetsNext