Free Tablature for “Silent Night” for the Treble Kalimba 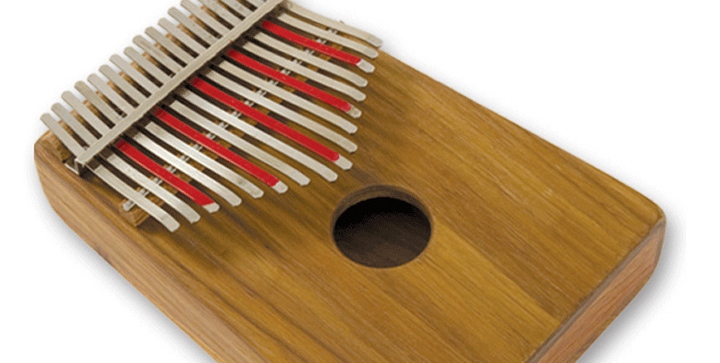 In my mind, most songs that you can play on the Treble kalimba are also possible to play on the Alto kalimba, and this offers great flexibility.  But there are some songs that are written for Alto that require its low notes and are just not possible on the Treble which by nature is in a higher range.  You could retune the Treble into a Bb Treble, and then it would behave just like an Alto with two extra notes.

But there is one (very famous) song that I don’t think can be done properly on either the Alto kalimba or the Bb Treble kalimba – it requires the high notes of the Treble kalimba in standard G tuning, and that song is “Silent Night.”

The high C in measure 18 in the tablature below (right where we sing “heavenly peace”) is the reason why I like to perform “Silent Night” on the Treble kalimba.

By the way, I was recently hanging out with someone who had just gotten a Treble kalimba.  They had started reading tablature with their new kalimba, but then concluded that since they had an excellent ear, it was easier to play by ear than to read the tablature.

So, if you are bold and daring and feel that you know what you are doing, I totally encourage you to play by ear.  But start with the tablature, to give you the idea of the song and to get you started on the right foot – or the correct thumb anyway. 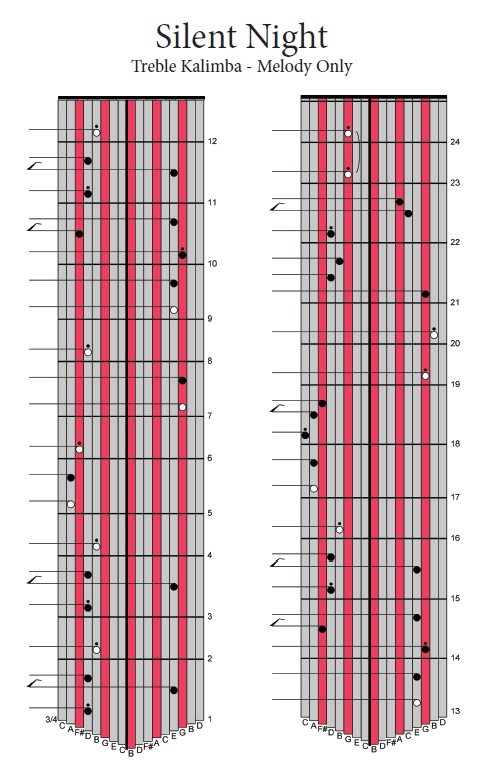 Chords and harmony are another matter altogether.  Generally they require a bit more sophistication.  When learning a song, I think timing and rhythm come first – it is not difficult to hear a rhythm and play that rhythm back.  Then comes melody – a good musician will be able to play most simple or moderate melodies by ear, with a few fumbles here and there.  But harmonic understanding is more difficult, because there are more notes.  Also, we are taught since nursery school to think in terms of melodies, but, unless they were given music lessons early, most musicians don’t start to understand chords until they are in high school or college.  Most people just haven’t had a lot of practice with chords.

We all generally know “Silent Night” and its timing/rhythm and melody. In the tablature, the melody line is embedded in this “melody and harmony” version of “Silent Night”.  The song’s melody is reproduced exactly here, with extra harmony notes on the first beat of each measure.  In this arrangement, the melody note is always the highest note at any given time.  Adding harmony notes below the melody note at the start of each measure is a common way to add harmony on the kalimba, though certainly not the only way. 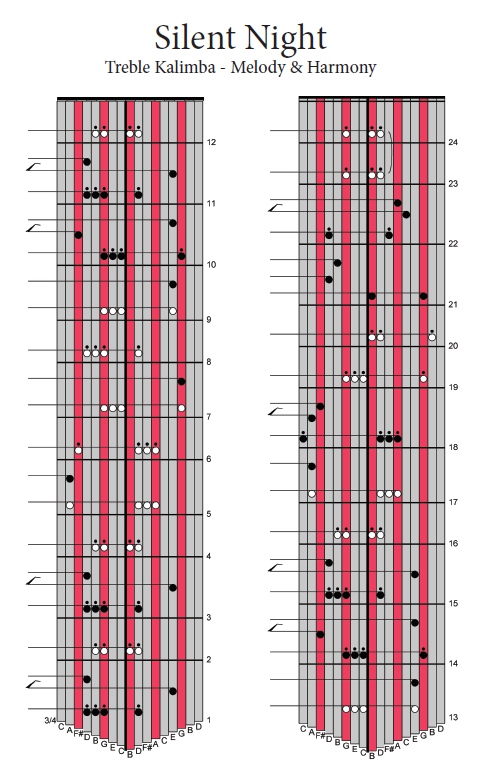 If two adjacent tines are played as a chord, place your thumb nail between the two tines to be played and pluck down on both in a way that makes both tines ring with more-or-less equal volume.  If you need to play three adjacent tines, you need to perform a glissando – touch the lowest tine (the one nearest the middle of the kalimba) to be played and then lightly drag your thumb nail across that tine and the other two tines of the chord.  Make sure you stop on the third tine.  If you go too far and play four tines, you will play a 7th chord, a richer, jazzier chord than is required in “Silent Night.”

More about glissandos: When you play a glissando, you don’t have to play the three notes simultaneously or even rapidly.  If you go slowly and spread the notes out over time, you can get the same type of sound that a music box plays.  Similarly, if you have two low notes on one side and two higher notes on the other side – as in measure 2 – try playing a two-note glissando first on the low notes, and then a two-note glissando on the upper notes on the opposite side, timing the notes as if you had played a four-note glissando on one side. This technique can provide stylistic unity to your playing.

Of course, in adding harmony, you may need to “hunt and peck” to find the notes to play.  Take your time.  The important thing is to develop a feeling or an intuition for how harmonies are made on the kalimba.  As that intuition begins to dwell in your thumbs, you will pick up speed and play more gracefully.

The advanced player may try to emphasize the melody note by playing it a bit louder.  This subtle effect can be challenging, but is well worth the effort.

Mark Holdaway has been playing kalimba for over 30 years. He invented his kalimba tablature in 2004, and has been writing books and instructional materials for kalimba ever since. His business, Kalimba Magic, is based on the simple proposition that the kalimba is a real musical instrument capable of greatness. Mark's kalimba books are a down payment on this proposition.
PrevPreviousSongs for the 8-Note Kalimba – “Away in a Manger”
NextSongs for the Karimba: Building a Karimba SongNext