Learn this technique and write your own songs

The African-tuned karimba is a very interesting instrument.  Jega Tapera was a South African who played traditional music on a 13-note karimba, a historical folk instrument.  In the 1950s he was discovered by Andrew Tracey, who recognized his excellence, and Tapera subsequently began teaching at the Kwonangoma School in Rhodesia, where the 15-note version of the African-tuned karimba came into being in 1960 to further Tapera’s music.  In 1980 the 17-note version was first made by Tracey’s South African company, African Musical Instruments, which still sells Hugh Tracey kalimbas today.

Based on much scholarly research, Andrew Tracey put forth a very interesting theory that the karimba is very close to the “original mbira” in southern Africa, dating back over a thousand years, and that the traditional songs still played today on the karimba have roots that are equally ancient.

I find the karimba to be a great instrument, one that “speaks the African tongue.”  It is easy for me to create my own African-sounding music just by following a few simple rules.  I’ll share some of those with you here.

The tablature below features four different variations of a classic “two-phrase” song form. The first measure is one phrase, and seems to form a question, which is answered in the next measure by the second phrase. Notice that both the first and second measures start out the same way. This two-phrase structure is maintained through all variations.

Each variation is a handy bite-sized, two-measure segment of music, bounded by repeat signs. That is, you play the first two measures and repeat several times. When you are ready, go on to the next two-measure variation and repeat that. When you get to the last variation, instead of just ending, you may want to go backward through the variations to the beginning.

The purple stars refer to notes that have been added to or modified from the previous variation to make the music new and different.  As such, we are building a song from the ground up. 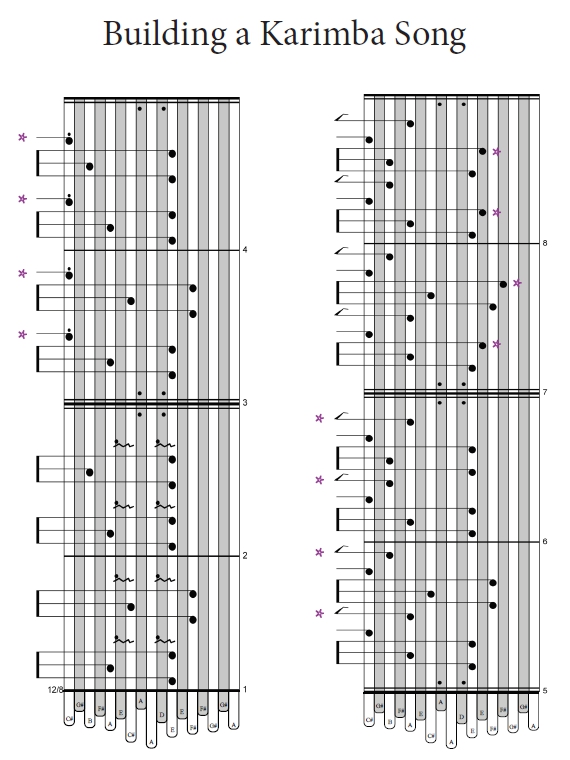 The first two measures have a dotted quarter rest filling the second half of each measure.  There is lots of empty space in this music at the beginning.  This is the whole point to it, as we are going to slowly, to make space.  Especially at first, it is very nice to have lots of space so you can stop and kind of scratch your head and figure out what comes next.

The third variation, measures 5-6, shows an additional eighth note that has been inserted at the end of what used to be a dotted quarter note in the second variation.

The fourth variation could have filled up all the space – the quarter notes could have been replaced by two eighth notes everywhere, packing each measure full of 12 eighth notes.  However, instead of packing each measure full, we keep the eighth notes, which leave a gap in the music and maintain some sense of space.  We form this variation from the preceding one by an octave substitution.  An octave substitution is exactly what it sounds like – the first two notes of the measure that are on the right side of the kalimba in measure 5 are the low E’s, and the first two notes that are on the right in measure 7 in the next variation are a low E and a high E – one of each pair of notes on the right is replaced by the same note an octave higher.   Octave substitution of a few notes in each phrase is a great way to make variations on any instrument, but it is especially easy to do on the karimba because on the right side, adjacent tines (one on the lower row and one on the upper row) make octaves.  If you can’t see this, look at the footer of the tablature, and on the right side it says: “E E F# F# G# G# A” – those repeated note names are octave pairs.  Substituting a high E for a low E here just means playing the upper-row tine to the immediate right of the tine we’re substituting it for.

Each of these variations will be perceived as belonging to the same song, because the changes from one variation to the next do not alter the harmony, and in fact leave the previous variation intact while we add extra notes.  That is, the melody that the ear became accustomed to hearing in one variation is also present in the next variation, resulting in a sense of unity pulsing through the entirety of this song.

Most important – have fun as you explore the internal landscapes of the karimba.  It can be one of the grand journeys of your life.

Mark Holdaway has been playing kalimba for over 30 years. He invented his kalimba tablature in 2004, and has been writing books and instructional materials for kalimba ever since. His business, Kalimba Magic, is based on the simple proposition that the kalimba is a real musical instrument capable of greatness. Mark's kalimba books are a down payment on this proposition.
PrevPreviousSongs for the Treble Kalimba – “Silent Night”
NextSongs for the Lotus Karimba: Three TrillsNext