Home > Blog > Item > Songs for the Chromatic Kalimba: “Carol of the Bells”

Songs for the Chromatic Kalimba: “Carol of the Bells”

Finally a breakthrough! Chromatic tablature that is easy to read and understand!

The Chromatic kalimba is a wonderful innovation based on the standard Hugh Tracey diatonic kalimbas such as the Alto and the Treble. Diatonic kalimbas play basically like the white notes on a piano. As long as a song stays in key with no accidentals, you can probably play it on an Alto or Treble kalimba. (An “accidental” is a note that is not in the key signature and requires a “flat,” “sharp,” or “natural” symbol. For the kalimba, though, this is a foreign concept, as “accidental” usually means “that note isn’t on the kalimba.”)

If a song changes keys or has accidental notes, and you want to play it on a kalimba, you need a Chromatic kalimba, which has all the notes of the scale, not just the piano’s white notes, but all the black ones too – the flats and sharps. Hugh Tracey Chromatic kalimbas are two-sided: they have the sharps and flats on their back sides, and the diatonic keys on the front sides.

“Carol of the Bells” is a beloved holiday song that can at best be performed in an approximate manner on the Alto kalimba – you really need the Chromatic kalimba to get the song just right.

In fact, “Carol of the Bells” is a great song for easing yourself into the Chromatic kalimba.

I’ll be frank: most kalimbas are an easy ride – you just move your thumbs and good sounds just happen. The Chromatic kalimba has the flats on the back side. You play the the front-side notes with your thumbs, and the back-side notes with your fingers. You cannot see exactly where your fingers are playing, so it is easy to play the wrong note. And as the back-side notes are the chromatic notes, when you play the wrong one, it tends to sound worse than most front-side errors do. (Why? Because front-side errors tend to harmonize with the intended note, which makes them more acceptable.)

That said, the back-side notes are arranged in a very logical way that facilitates playing: each “flat” note is located immediately behind the unflatted version of that note. Notes with flats behind them have little dots drawn on them.  Front-side notes that don’t have the little dots (G and C) have their “flats” (F# and B) on the front side, but on the opposite hand.

(Yes, F# is not a “flat,” but it is one half step lower than G – in fact, F# is the same note as Gb. Kalimba is a physical instrument – you don’t really think in terms of flats and sharps, but you think in terms of how your thumbs and fingers need to move to accomplish a certain melody or harmony. As such, the Chromatic kalimba, and thinking about the Chromatic kalimba, is challenging.)

Now, the tablature for the Chromatic kalimba looks like the following: 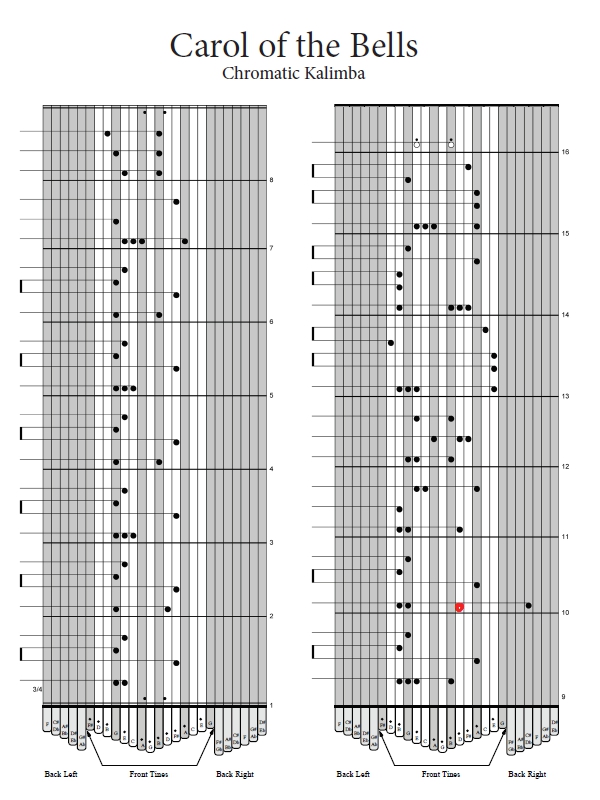 Click to download PDF of tablature. This image is page one only; the PDF has both pages. The image shown here is of limited resolution, but in the PDF you have options to increase the image size.

The first page of “Carol of the Bells” requires only one back-side tine. If you download the 2-page PDF, you will find that back-side tines are used six more times on page two of the tablature. In other words, this song has very few back-side chromatic notes and is just about right for someone who knows how to play the Alto kalimba and would like to start learning the Chromatic kalimba.

The first chord of measure 10 has a chromatic/back-side note. There is a (black) note in the C# / Db column on the far right.  It might be pretty hard to find this note on the back just from that tablature information. Another way to indicate where to find that back-side note is to mark the front-side tine that is right in front of the chromatic note to be played. This is indicated with a red hollow symbol in the D column at measure 10. This red symbol does not mean to play the D tine on which it falls – rather it means “play the chromatic note that is right behind me,” which is Db.

At first glance, the first chord of measure 10 looks like a four-note chord. But since the red note and the far-right note both represent the Db or C#, it is actually just a three-note chord.

These small technical changes transform the Chromatic tablature into a viable system for transmitting music and understanding. In summary, these changes are: the dots in the footer indicate the tines with flats right behind them;  in the footer, the tines are represented with their correct relative tine lengths; and chromatic notes to be played are indicated both by a black note on the correct back-side column as well as by a red symbol on the front-side note immediately in front of the tine to be played.

With these changes, it is much easier to read Chromatic tablature. I hope these improvements will put this tablature within your reach to help you on your journey of understanding the Chromatic kalimba and greatly expanding your musical capabilities.

Mark Holdaway has been playing kalimba for over 30 years. He invented his kalimba tablature in 2004, and has been writing books and instructional materials for kalimba ever since. His business, Kalimba Magic, is based on the simple proposition that the kalimba is a real musical instrument capable of greatness. Mark's kalimba books are a down payment on this proposition.
PrevPreviousSongs for the Student Karimba: Borrowing From a Karimba Song
NextLearn to Read Tablature – 2Next