Some of Hugh Tracey’s first kalimbas were made of aluminum! After building over 100 prototype instruments, blending traditional African design elements, Hugh Tracey brought easy-to-play, western-tuned kalimbas to the world in 1954. 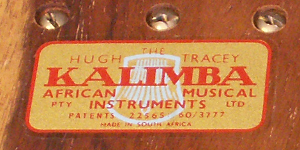 When Hugh Tracey founded ILAM (the International Library of African Music) in 1954, he knew he would need a funding source to keep it going. That same year he filed business papers to start African Musical Instruments (AMI) which would make and sell African instruments to the world. His idea was that by selling kalimbas around the world, he could both inspire interest in African music and make money to pay for ILAM’s operating expenses. 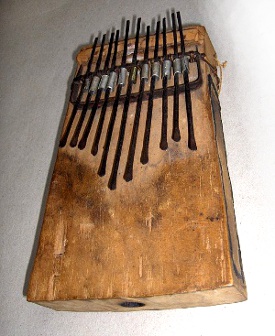 As Hugh Tracey was contemplating exactly what he was going to sell, he made an important decision. Because his purpose was to market the kalimba to the West, he conceived a new kalimba with a Western tuning, rather than use one of the hundred or more traditional African designs he had studied. Tracey well knew that these African tunings were all extremely exotic to the Western mind and ear. The kalimba he designed had the familiar diatonic (“do-re-mi…”) scale, and had an alternating tine layout which alternates left to right as you go up the scale. Tracey was inspired by the arrangement of the traditional African likembe, which also has an alternating note layout except for a low, drone tine on the far right of the instrument (see photo). With this tuning and note layout, he created the Hugh Tracey kalimba, a new instrument that lent itself to playing beautiful Western melodies and harmonies easily. It is ironic that Dr. Tracey spent his life loving, collecting and preserving traditional African music, yet he ended up inventing and disseminating a non-traditional, brand new species derived from traditional ancestral instruments to the world outside of Africa.

By using the diatonic western scale and the alternating left and right note layout, Hugh Tracey realized that he had created a new instrument that lent itself to playing easy and beautiful western harmonies, using simple rules of thumb (to coin a phrase!). 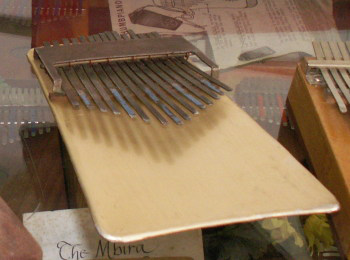 Hugh Tracey spent a lot of time experimenting with different kinds of wood, different materials for the tines, different methods for attaching the tines, and different ranges of notes. Some of his first trial kalimbas had a metal box, rather than the traditional wood. In the course of his experimentation, he made over 100 prototype instruments. Kiaat hardwood was eventually chosen for a host of reasons: it sounded great, looked beautiful, was plentiful (South Africa itself didn’t have very many kiaat trees, but neighboring Mozambique did), and besides, furniture makers used kiaat wood and their scraps were a perfect size for the tiny kalimbas. Hugh Tracey kalimbas are still made from this exquisite wood today. 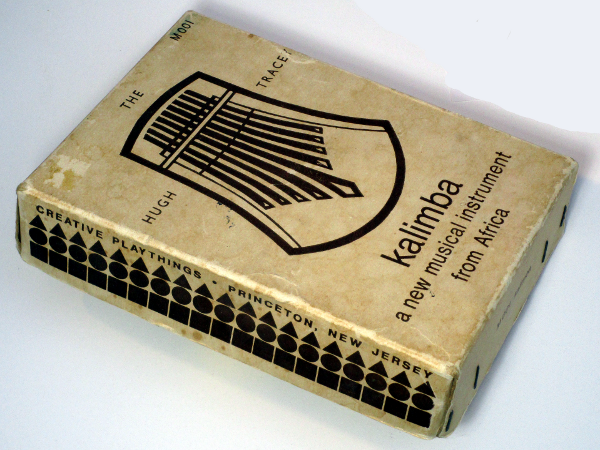 The first kalimbas Hugh Tracey took to market were Treble Kalimbas. The Alto and Celeste Treble came much later. In the early 1960s, Hugh took a few kalimbas with him as he lectured on African music around the United States. He met with executives at Creative Playthings, and they were so tickled by the diminutive instruments that they ordered 10,000 kalimbas! The company African Musical Instruments (AMI) was up and running. As soon as Hugh Tracey returned home, a small factory was set up back in Krugersdorp, South Africa. Hugh’s son Paul Tracey ran the shop in those early days. It was a busy and exciting time.

Printed on the side of an original AMI Treble Kalimba box, you can see “Creative Playthings, Princeton, New Jersey.” 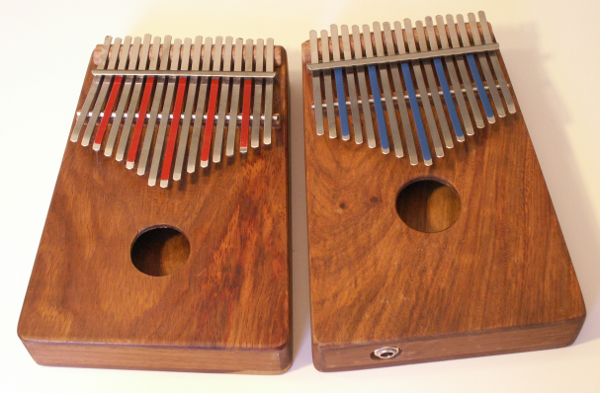 We recently unearthed a vintage, circa 1968 Hugh Tracey Treble kalimba in mint condition, in its original box. It was still in tune after 45 years! Perhaps even more striking to us was just how little the design of this kalimba has changed over 45 years. We took a close look at this vintage kalimba. 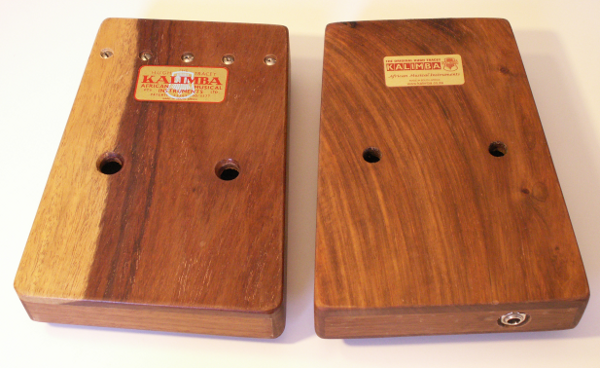 From the back, the design of the Hugh Tracey Treble Kalimba has remained very similar. The “z-bracket” pressure bar on the front used to be attached with five bicycle spoke screws in the back, while now it is attached by sinking five screws into a block of wood on the front. This, along with slightly thicker face wood makes the modern Hugh Tracey kalimbas a bit heavier. Also the placement and the shape of the vibrato holes on the back are a bit different. The modern labels now have a web site address, where the old labels had South African patent numbers. And the modern Hugh Tracey kalimbas come with an optional 1/4 inch jack attached to an internal microphone or pickup. But the wood is still kiaat, the metal is still spring steel, the instrument is still tuned and set up the same way; in all, the vintage and new kalimbas sound remarkably similar and still make the same great music. The minimal changes that have taken place in the design of Hugh Tracey kalimbas since their introduction to the world is a testament to the work that Dr. Tracey put into all those prototypes. He designed a great instrument indeed!

Mark Holdaway has been playing kalimba for over 30 years. He invented his kalimba tablature in 2004, and has been writing books and instructional materials for kalimba ever since. His business, Kalimba Magic, is based on the simple proposition that the kalimba is a real musical instrument capable of greatness. Mark's kalimba books are a down payment on this proposition.
PrevPreviousThe kalimba meets pop culture
NextHugh Tracey founds the Int’l Library of African Music (ILAM)Next