What alternate tunings for the African Tuned Karimba?

What alternative tunings are available for thee African Tuned Karimba?

The African-tuned Karimba ships from Africa in a specialized African tuning with certain notes landing in between western notes. This is the microtonal scale which Hugh Tracey documented on the instruments in the 1950s.

The numbers below refer to the cents sharp (+) or flat (-), which you can do yourself with an electronic tuner. 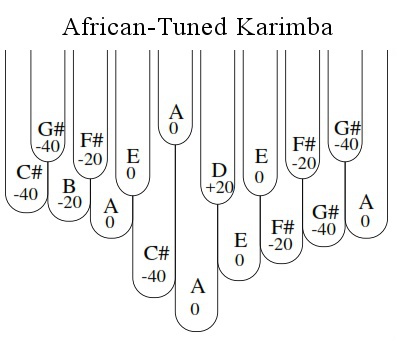 The standard tuning for the traditional, African-tuned karimba is intricate. Use the accompanying chart to tune your instrument. If you have a differently-tuned karimba, you can retune it to the African tuning with this information. And even if you don’t have a karimba, you can learn how a traditional microtonal tuning is set up – it has a logic that is discernable. This is one of the tunings studied by Hugh Tracey as he learned about the detailed tunings of traditional African instruments.

The numbers on the chart are there to help us see, in fine focus, just how sharp or flat the standard tuned notes are. Each number represents how many “cents” sharp (if a positive number) or flat (if negative) that particular tine is, relative to the note name on each tine. A half step is 100 cents. The A’s and E’s are right in tune, while the C# is 40 cents flat, almost halfway between a C and a C#. Why? This is the traditional African tuning that evolved and was perfected in Africa. 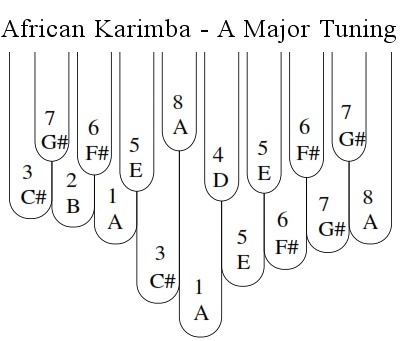 This is the westernized A major tuning for the African Karimba. In this case, the numbers in the diagram refer to the degree of the scale – 1 is the root, 3 is the third, 5 is the fifth, and these notes should all line up perfectly with a properly tuned piano or guitar. Thus you can play this karimba with many western instruments, including guitar and piano. Out of all the westernized karimba tunings, this one is the most useful. Andrew Tracey says that if you put this tuning into the hands of an experienced African player of traditional karimba, they would accept it as more-or-less correct, while they would not accept a minor-tuned version as correct. What this essentially means is that you can play all the traditional songs in this tuning and still get the basic feel of them. 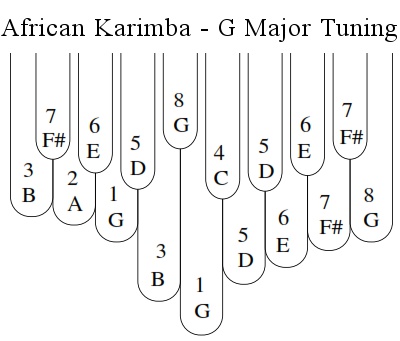 This is the G major westernized tuning of the karimba. This tuning is exactly one whole step down from the A Major tuning. The numbers are all the same, so all the intervals will be the same. Why would you want this instrument in G instead of in A? Because the standard key for Hugh Tracey Alto and Treble kalimbas is G, and if your karimba is also in G then you can play it with the other Hugh Tracey instruments. 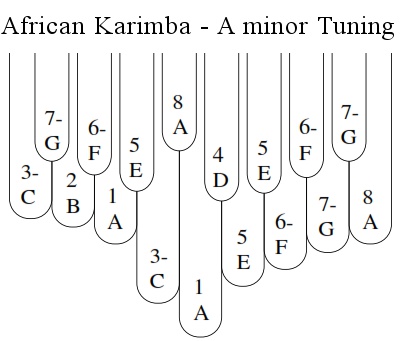 In the accompanying tuning diagram, the minus sign after the 3, 6, and 7 indicate that these intervals are now minor, making it the original African-tuned instrument with its notes rectified down to make an A minor western scale. Why would you want such a tuning? In this tuning, this karimba can produce wonderfully mystical, New Age-sounding music. In addition, it is playable with a Sansula, because A minor is also the standard key for the Sansula. I keep a karimba in this tuning because the A minor tuning has the same notes as the C major scale, and I use it when I perform with my marimba band.

The “Yekermo Sew” and “Three Original Pieces” downloads will work with this tuning. 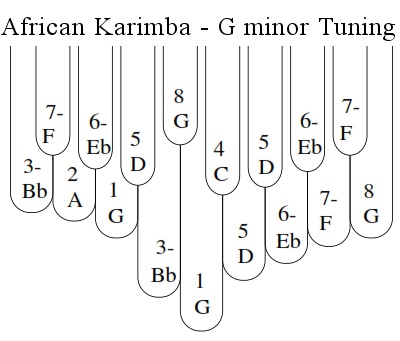 This tuning has the same minor intervals as the A minor tuning, but has been tuned down a whole step.
Why would you want such a tuning? Some people tune their Alto or Pentatonic Kalimbas to G minor because this tuning can lend a more mystical, New Age experience. I use a G minor tuned karimba because it has the same notes as the Bb major scale, so it goes with my Bb Treble.

The “Yekermo Sew” and “Three Original Pieces” downloads will work with this tuning. 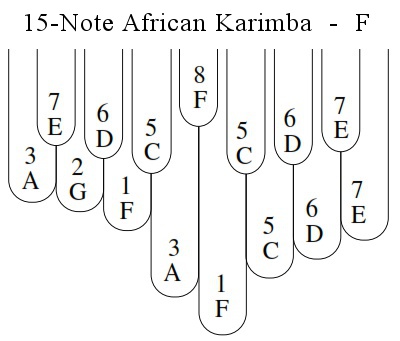 While the 17-Note A-based Karimba is built on a Treble (either celeste or box) platform, it is also possible to build a 15-Note Karimba in F on an Alto platform. F is important and very desirable because of the 55 (minimum) years of history behind the 15-Note F Karimba. In 1960, Andrew Tracey discovered the musician Jega Tapera in the township of Bulawayo, Rhodesia (now the country of Zimbabwe), and he was playing a 13-Note Karimba in F. Jega Tapera was recruited to teach traditional music at the Kwanongoma College of African Music, where students learned on an expanded 15-Note Karimba in F. One of those students was Dumisani Maraire, who brought the 15-Note F Karimba to the USA in 1968, where he popularized it under the name mbira nyunga nyunga (the sparkly, sparkly mbira). Dumisani’s daughter, Chiwoniso, also played the 15-Note F-tuned Karimba.Read more

The 15-Note Karimba in F minor 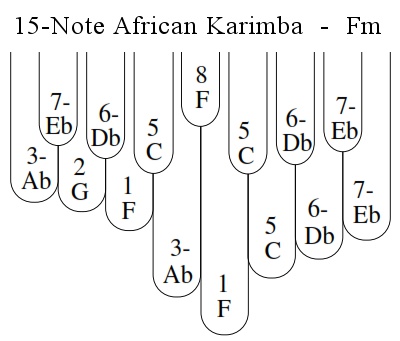 This is the same instrument as the 15-Note F Karimba, but cast into a minor-tuned version.Read more 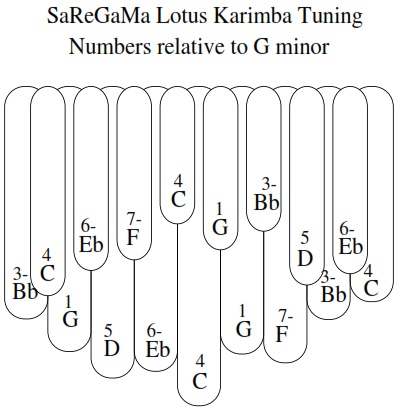 SaReGaMa’s Solo for Lotus is played in G minor, but the tuning supports either G minor or C minor. C minor is in some ways more psychologically compelling because the bass note on the Lotus is C. When G is made to be the root note, this is a straight natural minor scale, except that the 2nd is missing. 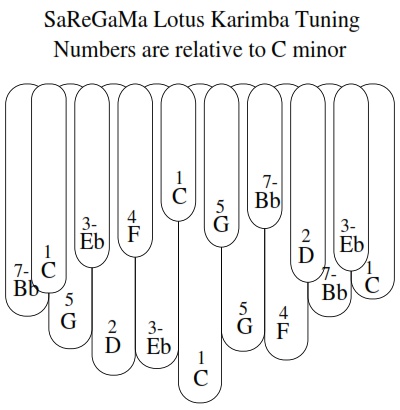 This chart has the exact same note names as the G minor Lotus tuning, but the numbers – that is, the roles that each note is playing – has shifted to make C be the “1” or root. From this point of reference, the 6th is missing, giving this tuning a sort of pentatonic feel. To be completely pentatonic, the D or 2nd would also have to be missing. 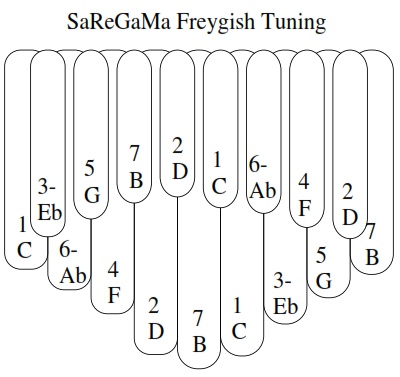 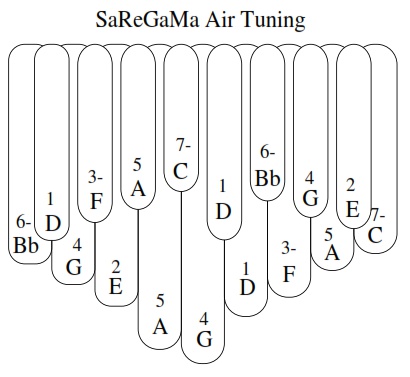 SaReGaMa Air tuning is a form of D minor with a 4 and a 5 in the bass below D (the 1), but skipping the 7th of the scale in the lower range. Why? Avoiding the 7th permits one to hear either an implied major 7th or a minor 7th, so the lower range does not conflict with the harmonic minor (requiring a major 7th). In the upper range, the minor 7th (which is C) is used, making this a natural minor.

Mark Holdaway has been playing kalimba for over 30 years. He invented his kalimba tablature in 2004, and has been writing books and instructional materials for kalimba ever since. His business, Kalimba Magic, is based on the simple proposition that the kalimba is a real musical instrument capable of greatness. Mark's kalimba books are a down payment on this proposition.
PrevPreviousAlternate tunings for the 8-Note Kalimba?
NextWhat tunings are available for the Sansula or B9 Kalimba?Next