The mbira nyunga nyunga, or the 15-Note karimba in F has only been around in this form since 1960. Thousands of Rhodesian (now Zimbabwean) and South African youth were taught the traditional songs on this delightful instrument at the Kwanongoma College of African Music. And, remarkably, it could well be that more than half of the notes on this instrument (and most of the songs for it) are essentially the same as what is thought to be the original tuning of an 8-note instrument invented some 1300 years ago.

And now, we are proud to present this eBook documenting many of the oldest-known songs for the mbira nyunga nyunga.

African Songs for the Mbira Nyunga Nyunga (aka the 15-Note Karimba in F) is a 78-page PDF eBook download that has links to sound files for 30 different traditional African karimba songs (and other musical examples). Live links to MP3 files make this easy to use from computer, tablet, or phone.

The mbira nyunga nyunga or karimba is a pure joy to play. Its name is a minor mystery, which is unraveled through the course of this book. Its note layout naturally inspires African sounds, and its repertoire of traditional music conjures the spirit of the African ancients. The nyunga nyunga is much easier to play than the mbira dzavadzimu (an older, larger and more famous instrument), and its songs are structurally simpler too, but it has enough tines to play beautiful, rich melodies and many traditional chord sequences.

This book accesses some great sources for the earliest written and recorded karimba songs from the 1950s, 1960s, and 1970s, looking back to a time when the people who played karimba were much less affected by the sea of western musical influences that is pervasive today. It is remarkable that many of those oldest known songs fit perfectly and simply on the mbira nyunga nyunga. We have no way of knowing exactly how old those songs are, but I speculate that some of these karimba songs could be hundreds of years old… or at the very least, I assert that the music presented in this book should be closely related to what people in Africa played on a similar instrument over a thousand years ago.

But we are not just about looking to the past. Some of the songs in this book are brought to us by modern performers of African music, Dumisani Maraire and his daughter Chiwoniso Maraire. While neither one is still with us, they both made a huge claim to the modern world that this deep and ancient music is still relevant to us today. 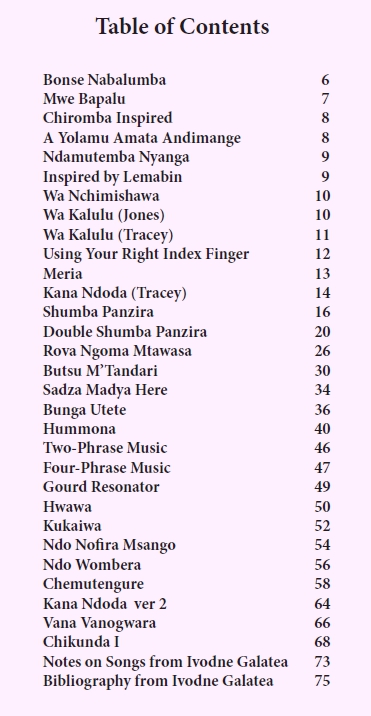 Even though this instrument has African roots more than a thousand years old, we can understand its music in terms of our modern western music theory. I find this to be truly remarkable, and it speaks profoundly to a fundamental unity of human music and the human mind across space and time.

So, when you play your karimba or mbira nyunga nyunga, reflect in both directions. The instrument in your hands is a living fossil, and brings us much from the past. But this instrument plays music that is remarkably fresh and can be understood by the same brain that understands modern pop music or classical music. And it is also an instrument that boldly sings of the unity of humankind and calls out for respect for the African hands and minds that created these instruments and this music.

Join me, read, play, learn, and understand. This journey is well worth taking.

Here is an example of one of my favorite songs from the book – two variations of the song “Shumba Panzira” (The Lion on the Path): 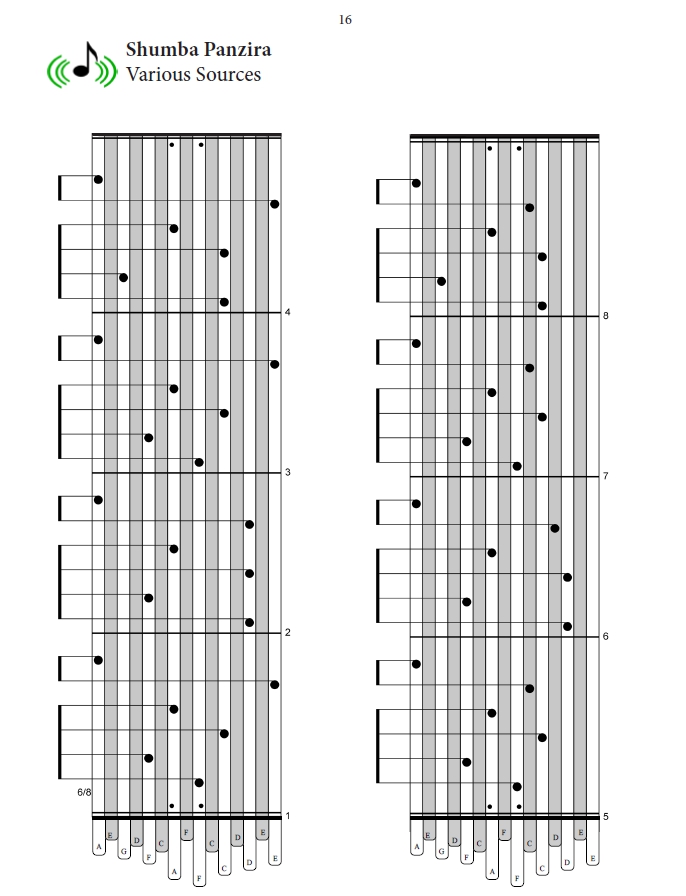 Mark Holdaway has been playing kalimba for over 30 years. He invented his kalimba tablature in 2004, and has been writing books and instructional materials for kalimba ever since. His business, Kalimba Magic, is based on the simple proposition that the kalimba is a real musical instrument capable of greatness. Mark's kalimba books are a down payment on this proposition.
PrevPreviousThe Kalimba and Transformation
NexteBook for the A minor KarimbaNext