Africans and Europeans Both Used This Cool Trick

Generally, when you encounter a kalimba, it is usually in a particular key.  The Alto usually comes in G major.  The Bb Treble comes in Bb.  The 17-Note African-tuned karimba comes in A (unless we retune it), and the 15-note karimba (aka mbira nyunga nyunga) comes in F.

One usually plays a G major kalimba in G; but there are other ways.  You can actually pick a different note on the kalimba and make that one be the root note.  You establish a particular note as the root note by emphasizing it as “home base.”  You can emphasize a note as “home base” by starting or ending a song on that note, or by playing it more often that the other notes.

If you use an alternative note (not the key note of the kalimba) as the root note, then you are playing in a different “mode” than the one suggested by its original key.  The different modes have different scales, each with its unique melodic flavor.

In a noteworthy twist, traditional karimba music uses different modes in the same manner that western music does.  What makes this remarkable?

This application of “modes” is actually a fairly sophisticated musical concept.  A few months ago, I wrote a post describing six different modes in which the G Alto kalimba can be played: D mixolydian; A dorian; E aeolian; C lydian; B phrygian; and of course our plain old vanilla G major.  Each mode has its own unique musical character.  For example, a mode may elicit happiness, sorrow, mystery or adventure.  As a player you might consider each mode as a unique palette of colors you can use in your compositions or improvisations.

And now the punchline: These sophisticated musical techniques are also used on the African-tuned karimba.

Let’s look at three particular modes that have been used in traditional African music. 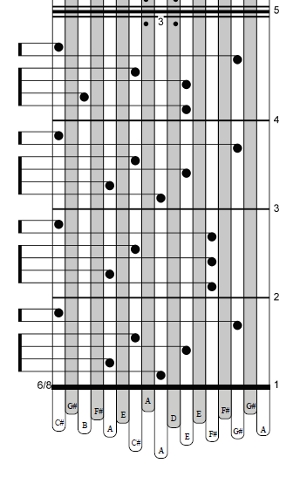 This song uses the karimba in its most straightforward mode, dipping down to the karimba’s lowest note A as the root note. A also happens to be the karimba’s highest note. There is a total of four A notes on the Hugh Tracey karimba. Other notes appear three times (E, F#, and G#), the note C# appears twice, and B and D appear only once. A clearly occupies a special place on this karimba. If you picked up the instrument and just started playing, you would likely settle in to A major.

The tab to the left shows the first variation of the song, while the recording above is for all the variations of this song in the book “About 30 Traditional African Songs”. 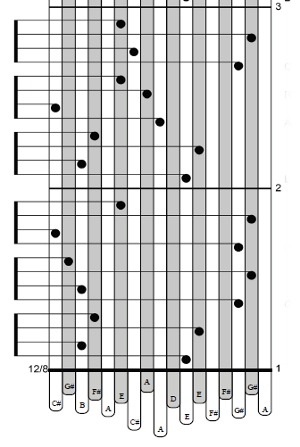 In this song, E is emphasized in several ways. The first two measures (each a phrase) both start and end on E. Also B (the 5th of E) is featured prominently. In both western and African music, the 5th note of the scale basically ushers the listener back to the root note.

Most traditional karimbas did not have the 17 notes that our version does; they had 15, and they lacked the D note. Hence, there are a great many traditional songs that skip over the D. If we were to play the D note, it would be the flat 7th of the E scale; and we would have the myxolydian mode, which is mostly major. Because we skip over the D in this song, this mode cannot be distinguished from a straight major scale.

The harmonic feeling is similar to the A major mode, but different music can be played in E. 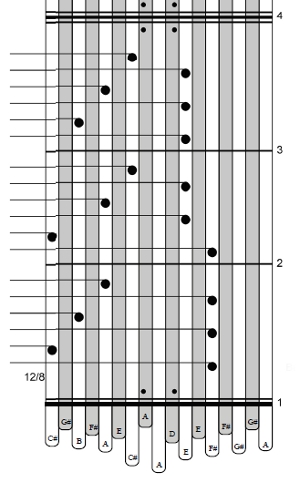 Bunga Utete clearly emphasizes F# as the root note: F# is the first note; it is played three times in the first measure; and its 5th, C#, is played four times in the first variation. This mode is the same as the natural minor scale. The minor feels serious, melancholy, moody, and sometimes perhaps mystical. (Each person will have their own emotional associations with these different modes, and different cultures will have different emotional associations as well. But if you asked 10 of your neighbors how music in this mode makes them feel, you would get similar answers from most of them. )

Out of the large repertoire of traditional African pieces for the karimba, we have identified three songs, each of which uses a different root note, and hence uses a different mode. Using different modes in this way greatly expands the musical palette and possibilities of the instrument. This illustrates the complexity and musical understanding of the minds behind this music; and it shows us three wonderfully different ways we can play this instrument.

Mark Holdaway has been playing kalimba for over 30 years. He invented his kalimba tablature in 2004, and has been writing books and instructional materials for kalimba ever since. His business, Kalimba Magic, is based on the simple proposition that the kalimba is a real musical instrument capable of greatness. Mark's kalimba books are a down payment on this proposition.
PrevPreviousWhat’s New at Kalimba Magic?
NextMy Mbira Journey Started With KarimbaNext