Three Against Two for Structure – 1 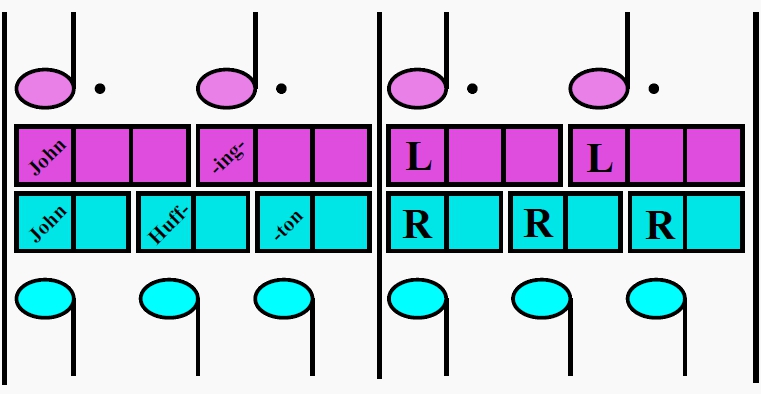 What does “John Huffington” have to do with the classic African three-against-two multi-rhythm?

I don’t know a John Huffington, but here’s his name, embodied in this rhythmic riff when I play it on the Hugh Tracey Alto Kalimba.

When I fall into the groove of this pattern, I hear my kalimba saying  the name “John Huffington.”

The three against two pattern requires that one thumb play one thing (three notes) in the same space as the other thumb is playing something else (two notes). And repeat.

You can play this sort of riff on any kalimba. This post gives you a prescription for how to accomplish the feat.

Really, no joke. John Huffington. Listen to the music in the background, and if necessary, start it again at the bottom of this page. So, maybe the first, slowest part, played by the right, is saying “I am John. I am John.” And then the left says something like “Huff – ing. Huff – ing.”

I gradually put them together, speed up, get in the groove, (which may take some practice, and that’s great), and like a little steam engine, I hear the kalimba chugging out “John Huffington.”

(Hey, John – if you are more than a myth, write in and we’ll have a chat about the usefulness of your name!)

(I am not going to ask you to take on John Huffington, but do be on the lookout for when your kalimba speaks words to you. You should hold on to those words. Next time you play, if you can get it to speak those words to you again, you know you are repeating what you had done before and you’ve made it back to this particular place in the land of kalimba music.)

The tablature to the left shows you how to play the simple three against two rhythm. (Usually it’s “two against three,” but I start with the three in this music.)

In measure 1, the right thumb plays three quarter notes in a measure, which is repeated. It almost sounds like a waltz. These three notes, G – B – D, form the G major triad. In this time signature (6/8), each of them gets two beats.

Then after a few repeats, in measure two I play the two dotted quarter notes. On this one, I am sticking to the same note. The dots signify that these notes each get 50% more time than a simple quarter note, and hence it only takes two of them to fill a measure, and each gets three beats.

I put the two hands together, slowly at first. I repeat over and over again, and soon my mind can be left out of it… it becomes an almost entirely physical act to repeat this little grain of music… and I can speed up, going faster and faster… until I launch into a song.

This song is more like the hint of a future song, something to remind me to come back and develop this idea more, because there is the certainty that something beautiful can be done with this music.

I start the song with the G-based three-against-two… but then, I puff everything up a bit – shifting every note of the pattern outward by a tine (measures 5-6). Now, the three right-side tines are B – D – F#, which happens to be the B minor triad. The left-side note switches to B, an octave higher than the low note.

Also notice that the first beat of each measure (in measures 5-6) – the only place where the right and left notes line up and are played at the same time – both notes are B. This emphasizes B as the root both rhythmically (by putting it in the most prominent “1” beat), and harmonically, strengthening the song’s “B nature” by playing two different versions of it.

And now, time for your homework assignment: can you flip the sides of this equation and play the three notes on the left side and the two notes on the right? What chord would you choose?

Toward the end of the accompanying recording, I turn the crank and go around to other chords, but the music is unified through the general use of the three-against-two rhythmic pattern integrated with our little musical concept (triad on the three side; but just play the same note, the octave of the triad, on the two side).

And we’ll be back with more. There are many other ways to utilize the concept of three against two, or two against three, in all sorts of music.

Mark Holdaway has been playing kalimba for over 30 years. He invented his kalimba tablature in 2004, and has been writing books and instructional materials for kalimba ever since. His business, Kalimba Magic, is based on the simple proposition that the kalimba is a real musical instrument capable of greatness. Mark's kalimba books are a down payment on this proposition.
PrevPreviousAn Interesting Kalimba Purchase Strategy
NextNew Exotic B11 Tuning: The WizardNext