Have you ever read the book, “Zen Mind, Beginner’s Mind”?  The basic idea is that we can make great progress on our journey by approaching everything with an open, beginner’s mind, for it is in this state that we are ready to be taught, we are ready to see, and we are ready to understand.  The expert who already knows everything might not ever see the truth.

While I like to think of myself as a kalimba expert, I do get knocked on my (musical) butt quite often.  So really, I am only an expert at playing in the fairly narrow musical style that I know how to play.

For me, to learn mbira music on the kalimba is a leveling experience.  The thumb patterns required to play this music on kalimba are so foreign that I have been brought down to the level of “total beginner.”

If you don’t already know, the mbira (aka mbira dzavadzimu) is a centuries-old traditional lamellaphone from the sprawling Zambezi River valley of Africa. The mbira has an extensive repertoire of hundreds of songs.  Today this tradition is alive and healthy, with hundreds, perhaps thousands of mbira fans and players in many countries around the world, and a vibrant culture of mbira players and teachers in the African nation of Zimbabwe.

The kalimba is a non-traditional lamellaphone made originally in South Africa in the 1950s; now it is made around the world.  While elements of the kalimba’s design were taken from several different traditional instruments, including the mbira, the kalimba was designed (by a westerner) to play western music, and was marketed to the Americas, Europe, and Asia.  Until recently, it has been actually rare for people to play traditional African mbira music on the kalimba, but the work that I am doing is changing this.

The mbira is more complicated than the kalimba, both in its idiosyncratic note layout and number of tines (23-26, as compared to the kalimba’s 15-17).  Mbiras tend to be more difficult to maintain than kalimbas. They can also be much more physically demanding to play than kalimbas.

After playing western music on the kalimba for 30 years, and after playing the karimba for 11 (the karimba is an instrument that co-evolved with the mbira, but is significantly simpler), I am pleased to say that I am finally working with the mbira and making progress.  And as I learn to play traditional mbira songs on the mbira, one of my projects will be to translate these songs to Alto or Treble kalimbas.  The mbira has a three-octave range and the kalimba has only a two-octave range, so I will have to make some compromises in the translation, but I really look forward to the challenges (and satisfactions) of bringing traditional mbira songs to the kalimba.

Here is the song “Taireva,” which I have been enjoying playing on the mbira: 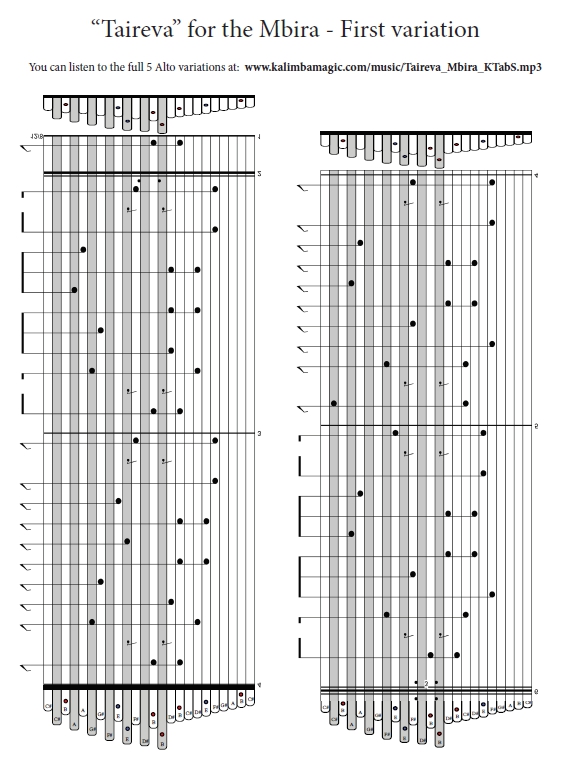 Tablature (reads from top down) for the mbira song “Taireva” – click to download PDF of the tablature, including link to MP3 files.

I found that “Taireva,” originally an mbira song, best fits onto the Alto kalimba if the kalimba is tuned as a C Alto, which means that the root note is not in the bass.  If you have an Alto kalimba in standard tuning, this just means that you will need to tune the two F# notes down to F natural, and you can probably accomplish this in a few minutes. The C Alto layout for Alto kalimba is one of the easiest retunings for you to accomplish. 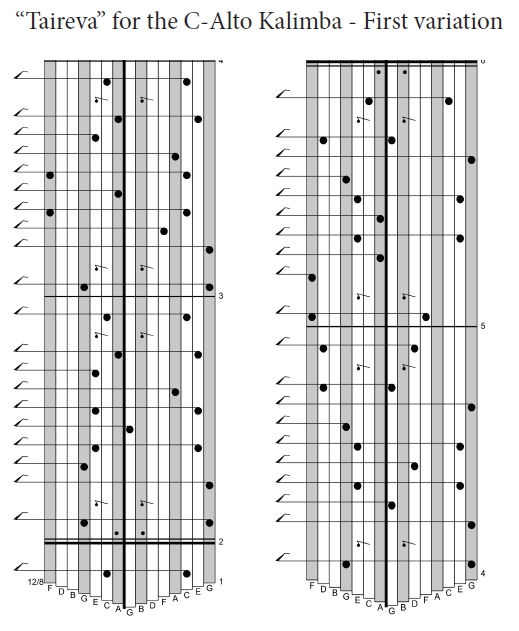 Tablature (which goes from the bottom up) for Alto Kalimba for the mbira song “Taireva”. Click the image to download the PDF of this Alto tablature, including link to MP3 files.

Even though I am really good at playing Alto kalimba by ear, and even though I have studied mbira music fairly deeply, I have not for the life of me been able to just jump into “Taireva” on the Alto kalimba.  It is exotic and obscure, as if it were a foreign language.  Most western music is built on melodies that generally move by one or two notes in the scale, and I have actually become an expert in playing such melodies on the kalimba.  But the language of mbira music is built on melodies that move in intervals of a fifth or an octave. An alien language for us westerners, until we begin to understand how it works.

What is needed to be able to play mbira music on the Alto kalimba is a good facility with octaves and fifths – in other words, with jumping around a lot.  I’ll be creating exercises in the future for you and me that will strengthen our abilities with octaves and fifths, hopefully making us more fit to tackle future mbira musics.  For now, the best we can do is to bite the bullet and take this tablature slowly.  As you continue working on it you will find yourself gaining confidence and speed. I myself cannot play “Taireva” on kalimba from the Alto tablature yet.  I am on my third day of working at it (about 20 minutes a day), and I can play all the notes in the right order, but not at all in time.  Right now it’s slow going, like trying to type with my toes – awkward and not simple.  However, I can feel the logic of this music growing in my bones, and I can see the day when I will be able to play “Taireva” on Alto kalimba as well as I can play it on mbira.

Tips for learning this music, from one “beginner” to another:  at first, just try to play the notes in one measure, and repeat that measure, again and again.  At first, you won’t have a steady rhythm, but that is our goal, to play steadily and slowly, looping through the music one measure at a time.  It is slow, it is painful, but it will not last forever.  As you start to get some continuity in each looped measure, next work at combining the individual measures into the entire cycle.  My big thing is to be able to play a piece totally from memory (“by heart”).  As this music is so strange to me, doing that is not simple.  So, I’ll sit and work with the tablature for 10 or 20 minutes, and then go away from the tablature and try to puzzle out the notes by a combination of memory, ear, and logic.  I will inevitably piece together a version of the song, which will also inevitably be incorrect.  I then return to the tablature and correct my errors, and go try it from memory once again.  In order to remember little bits of the music, I invent little stories about how the notes are related by their tones, or where the notes are, relative to each other or to the painted tines.  These stories stick with me and help me remember and will help make my playing strong.

Only the basic part is presented for the Alto kalimba in the tablature above.  I actually got so excited when I realized “Taireva” fit almost perfectly onto the C Alto kalimba that I wrote four more variations that especially lend themselves to the Alto kalimba.   I intend to put them in a book of music for the Alto in the future.  I have recorded all my variations for Alto, which are playing in the media player below.

Mark Holdaway has been playing kalimba for over 30 years. He invented his kalimba tablature in 2004, and has been writing books and instructional materials for kalimba ever since. His business, Kalimba Magic, is based on the simple proposition that the kalimba is a real musical instrument capable of greatness. Mark's kalimba books are a down payment on this proposition.
PrevPreviousThe System of the Mbira – Part 1
NextWhat kalimba plays the songs on Top 40 Radio?Next