What? Those squiggly lines are supposed to mean something? 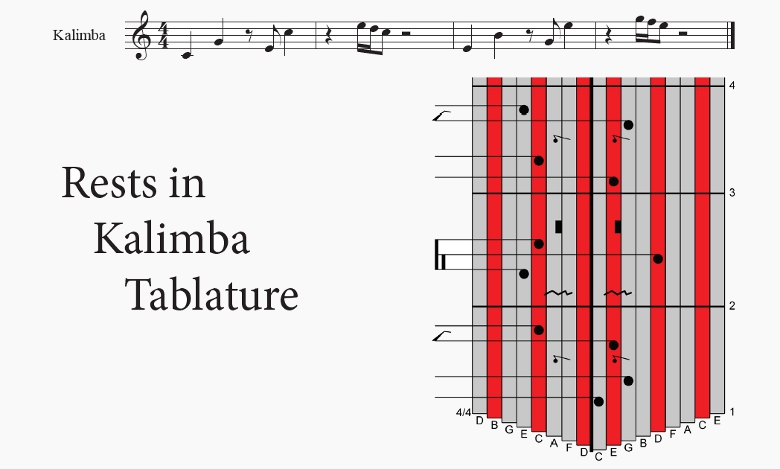 There are going to be some really great kalimba players in the next 2-10 years. A lot of kids are getting into the kalimba, and some of them will study, and go off and work on kalimba on their own, and invent their own style, and then reappear on the world stage as master kalimba players. Cool! Go for it!

One budding young kalimba player has been avidly tearing up all of the instructional material we sell for the 17-Note kalimba in C… but when she didn’t understand what those squiggly lines meant, we heard from her about it. Those squiggles are called “rests.” Different rests come in different shapes, based on how long of a rest they indicate. And we explain all that here. 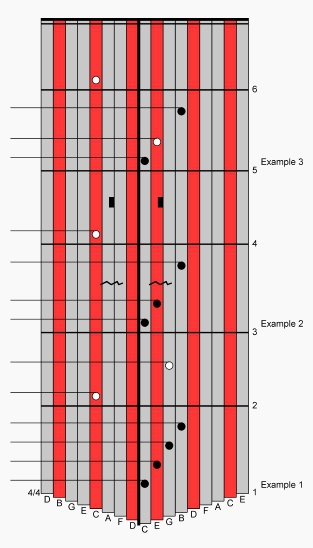 If you are playing the bagpipes, trumpet or some other instruments, a “rest” is a special notation in the music that says “Don’t Play.” On kalimba, a rest could mean “don’t play”… or it could actually mean “wait a bit before you play the next note.” 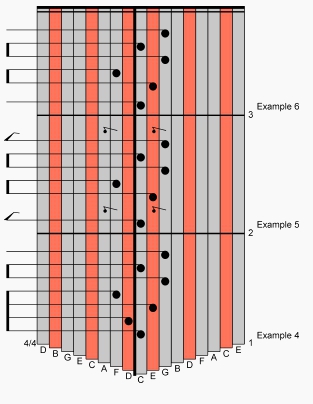 Oops! You don’t know what half notes, whole notes, and quarter notes are? Well, here is a crash course on the different types of notes and rests.

Measures 1-5 show show several different types of notes. Measures 6-10 show the same music, except in rests.
The whole note gets 4 beats, or otherwise fills an entire measure. It is just a white ball. The half notes get 2 beats each, and two of them fill a 4/4 measure. They are white balls with a simple stick facing to the left in our kalimba tablature. Quarter notes each get a beat, and there are four of them in each 4/4 measure. They are solid black balls with a simple stick facing to the left. Eighth notes are solid black balls with the sticks to the left, but if you have more than one of them next to each other, they are usually beamed together. If there is just one by itself, it will have a “flag” at the left end of the stick, instead of the “beam” joining the several eighth notes. Two eighth notes get one beat, or four eighth notes will get two beats, and eight eighth notes will get an entire measure of four beats in 4/4 time. There are also sixteenth notes, with double flags (or in this case, double beams).

In measure 3, you see a “dotted half note.” A dot immediately after a note means “add 50% more to the length.” As a half note is two beats, the dotted half note will be three beats, or take up 3/4 of the measure. The measure is finished with a single quarter note.

If you listen to Kalimba Master Kevin Spears, you will often hear him play two or more notes, and then slap his thumb flesh against the vibrating tines to actually stop them. This is a great technique to learn, and can help you play funky music. Putting that completely dead space in between played notes can actually make your played notes stick out more and be better heard by an audience or other players. While I sometimes use this deadening technique in my improvisational playing, I have not notated any tablature with instructions to do this. On the other hand, if you want to deaden the vibrating tines for the appropriate amount of time when you see a rest in the kalimba tablature, that would be technically correct.

Listen to me play kalimba as I intentionally stop each note, instead of letting it sustain naturally.

Mark Holdaway has been playing kalimba for over 30 years. He invented his kalimba tablature in 2004, and has been writing books and instructional materials for kalimba ever since. His business, Kalimba Magic, is based on the simple proposition that the kalimba is a real musical instrument capable of greatness. Mark's kalimba books are a down payment on this proposition.
PrevPreviousMark’s Rule of Thumb
NextMbira Songs Collected by B. Michael WilliamsNext