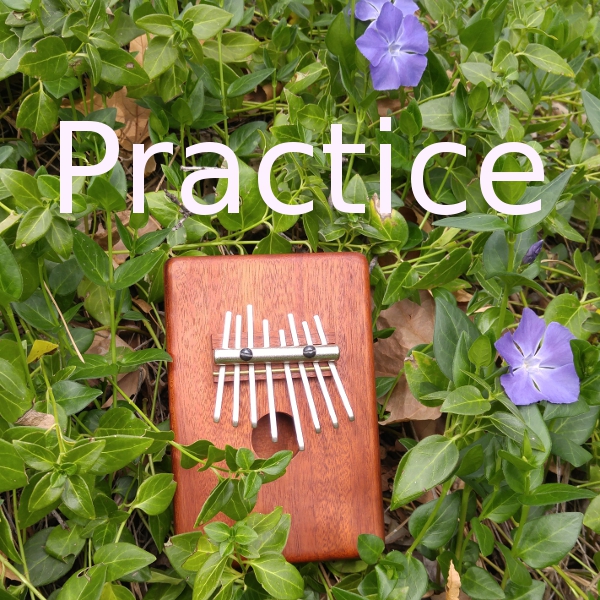 Don’t you hate all those internet ads that start with “Try this one weird trick” and then promise that if you do, it will change your life in a profound way?

Well, I have something for you that may seem like a weird trick, but it is really a great little tool that indeed has had a profound effect on my own kalimba, karimba, and mbira playing.

People tend to play kalimba music with every note at the same volume level.  But I can point to three big benefits you can get from changing up the volume level in your kalimba playing.

When learning a new song, in the beginning you normally must play very slowly. As you proceed, and have the notes in your head and are starting to teach your hands what to do, play strong and loud. That is, practice your notes slowly but also strongly and loudly. It is known that playing this way early on is very effective at helping the brain encode that strength along with the notes of the song. More importantly, I believe that when you play hard, the neural network that encodes the song in your brain will develop more quickly.  (I learned this from piano class.) This is the first of the three rewards for developing volume awareness.

Once you know the song, and are working on playing it up to speed in the strong and confident and loud way described above, but you’re having trouble getting notes out, try playing very softly. I find that it is easier to play softly. It takes less energy, and my thumbs are moving much less.  This is the second way to use volume to great advantage. Just stepping back and pretending I am not in control (really, I’m not, so it isn’t much of a pretend) tends to help me find the music.  It is almost as if I am giving up being in charge of the music, and deciding I am going to follow.  But who is there to follow?  The ancestral spirits perhaps?  It doesn’t really matter, what matters is that we are stepping back, letting the Universe step in and lead.   And who wouldn’t want to follow the lead of the Universe?  Wisdom and wonder and beautiful music all are out there, and frankly most of it doesn’t come from you or from me.  Stepping back lets that wonder and magic manifest via unexpected means.  Often I find that if I had trouble playing a phrase of music loudly, just stepping back and playing softly often brings me to a place where the music is working better.

After I am “getting” the music better, and I have a better grasp on how the song goes, I can then go back and play the music with stronger plucking and higher volume, and I know this will help with the memory encoding.

When searching for the subtlety and meaning of the music, this is a good time to experiment with sometimes playing more quietly and sometimes playing louder, or musical dynamics.  And generally it should not be an abrupt switch – rather, there will be times when you are building and getting more intense, gradually.  There will be times when you want a slow wind-down or fade out.  How long can you play, slowly decreasing the volume level, before the sound is so soft that you are essentially done?  I find that I can go about a minute continually decreasing the volume.  Doing this can make it sound as if you are gradually walking away from the listener.  You can make it sound like a music box winding down if you add a slowing tempo.  Or it could sound like someone dying, letting go of their will to live and their consciousness.

What does the music suggest, request, or demand?  There is a story, and emotions that go with it, in every piece of music.  As you become more experienced, you will have ideas when you first hear a piece or start to play one.  Lacking experience can be seen as a good thing in this instance, because it means you will have to experiment – when you play a bit louder here, and softer there, does it assist the music, or detract from it?  You won’t know until you do it, probably a dozen times.  Play with that changing volume profile over and over again, and try to listen as you play – is it working, or is the volume change confusing? Does the changing volume help reflect the emotions you feel from this music?  Musical dynamics is the third, and very important, facet of our discussion of volume in kalimba playing.

In your experimenting, do trust that while there are billions of ways to play a piece that are not congruent with the underlying meaning of the music, there are hundreds or thousands of ways of playing that piece of music that will be congruent with the musical meaning you are trying to convey.  Also trust that some of these ways of playing will be available to you, and some of them will even strongly resonate with you.

This is where the magic of being YOU comes in – it might be that you are the only person to figure out a certain way to play a certain song.  That representation of the music would not exist if it were not for you.

Bring your own uniqueness to the table.  Don’t hide it, but bring it out for everyone to see.  Nobody plays quite like you. See this as a strength.

Below is an example of a tune that I played very softly.  It is a bit melancholy, and the soft playing actually helps with the expression of the song’s underlying meaning.  The playing gets a bit stronger at about 0:50 as the “B” part comes in;  the increased volume helps differentiate the “B” part from the “A” part.

Mark Holdaway has been playing kalimba for over 30 years. He invented his kalimba tablature in 2004, and has been writing books and instructional materials for kalimba ever since. His business, Kalimba Magic, is based on the simple proposition that the kalimba is a real musical instrument capable of greatness. Mark's kalimba books are a down payment on this proposition.
PrevPreviousThumbing the Karimba at States of Inflammation
NextPlaying Kushaura and Kutsinhira Parts on MbiraNext