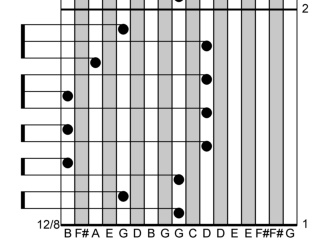 This is my favorite song from the 11 Advanced Traditional Karimba Songs Download. I think you’ll love playing this song as much as I do, and I put together a more accessible version than the original.

“Mahororo” could mean “victory”, or it could mean “baboons talking”, depending on who you believe (from Ivodne Galatea’s notes in the instructional download).

I recently learned this song, and I shifted the notes down a 5th. I include a video I made of Mahororo “freestyle”, and I am giving away tablature for this song on the Alto and Karimba.  The tablature has a lot of variations that I don’t touch in the freestyle video.

This performance is loosely based on the new arrangement made by shifting Galatea’s scheme down by a 5th. It doesn’t work on the 15-Note Nyunga Nyunga as that instrument is missing an important note. 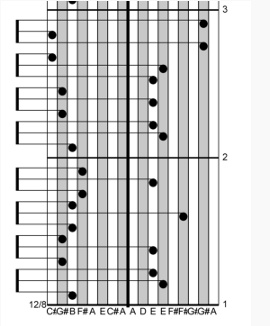 This is Ivodne Galatea’s original arrangement for Mahororo. This song is traditionally played on the mbira dzavdzimu and apparently has no tradition on the Karimba, but Ivodne saw that it worked on the Karimba when you make the Karimba’s 5th note be the root. The melody in this version is much higher, and there are some accompaniment notes that are much lower, which reminds us of the mbira with its course of extra low notes.

If you look at the first two measures of the Karimba tablature, the thumb patterns change rapidly and without a lot of logic: L-R-R L-R-L R-R-L and R-L-L all appear in short order. It occurred to me that there might be a better way to arrange this piece for Karimba, and this is addressed below. 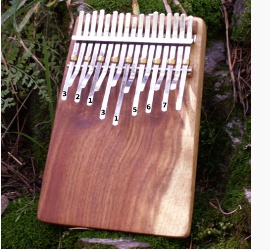 This music is the result of me transposing Ivodne’s original arrangement down a 5th. Why ever would I want to do that? Mainly it was because the song made no sense to me when I tried playing the original version, but immediately made sense to me in this lower arrangement. Some of the low accompaniment notes are lost, but higher accompaniment notes have been added. Some notes have been altered to make the piece more playable, and I have also made some of my own variations.

I arranged this for G Karimba, however if you have a 17-Note African Karimba in A, the tablature is exactly the same, but the note names at the bottom of each page are shifted. 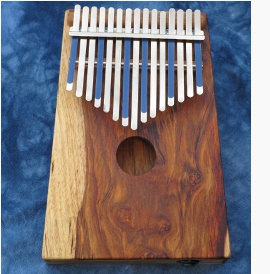 Song that are easy to play on the Karimba can be very difficult to play on the Alto just because the note layouts are so different. We make the Karimba downloads available for the Alto because the Karimba and the Alto both have a two octave range with the root note on both the lowest and highest notes. It is possible to play Karimba tunes on the Alto Kalimba, but it can be more of a challenge due to having to play several consecutive notes with the same thumb, or by crossing over the midline with the other thumb.

KTabS is a great program for Windows computers that renders and animates Kalimba Tablature. KTabS is not a part of Kalimba Magic; it is independently owned by Sharon and Randy Eaton, who have provided me with a wonderful tool for creating kalimba music, and I do everything I can to support and promote KTabS.

You can download the
KTabS Reader for free. It will play all of the KTabS files that we give away on the Kalimba Magic Website. What “play” means in KTabS is actually several things: you load the song into the KTabS Reader, and a map of your kalimba tines appears, along with notes indicating which tines you should play. When you click on the “play” button, KTabS highlights the notes and tines that need to be played. You will also hear those notes being played on your computer’s speakers. The tablature becomes animated! This is an incredibly powerful way to learn kalimba music.

If you want to do more with KTabS – for example, modify a song, change the tempo, insert repeats, or even write your own music (and plenty of other great features) – then you need the
full KTabS program for $30 from the KTabS Store.

Mark Holdaway has been playing kalimba for over 30 years. He invented his kalimba tablature in 2004, and has been writing books and instructional materials for kalimba ever since. His business, Kalimba Magic, is based on the simple proposition that the kalimba is a real musical instrument capable of greatness. Mark's kalimba books are a down payment on this proposition.
PrevPreviousIntroducing the Hang-9 Kalimba
NextNew Kalimba Magic Tips SeriesNext