Home > Blog > Item > F-sharp Karimba Instead of a Karimba in F?

Chiwoniso found just where her voice fit, and it was on an F# karimba 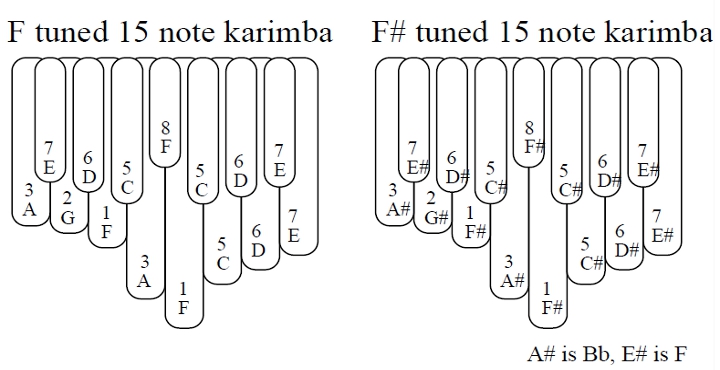 Chiwoniso, the late, gifted Zimbabwean-American musician, played a 15-note karimba. This instrument was originally taught at the historic Kwanangoma School of African Music in Zimbabwe, popularized by her father Dumisani Maraire as the “mbira nyunga nyunga.” It was usually tuned to the key of F. But Chiwoniso played her own 15-note in F#, in a not-uncommon musical strategy.

Often musicians will change the tuning of their instruments for the purposes of fostering their best singing (or that of the vocalists they accompany).  I myself play guitar for some women singers, and every time we try a new song, we usually end up trying it in three or four different keys.  We ultimately all agree on one key that works significantly better than the others.

Why is it so important to get the perfect key for the singers?  That is exactly it – finding the perfect key for the singers!  At least in this group, the singers’ voices are the most important part of the music, and my job as accompanist is to support the voices in any way I can.  And it turns out that raising or lowering the pitch of a song by just a small amount can make a huge difference in how someone’s voice feels and sounds.

Changing the key on guitar is relatively easy.  (To go to a slightly higher key, I put a capo on, artificially shortening the vibrating length of the strings and raising the pitches of all strings.)  Something similar could be done on karimba – (push each tine in slightly to raise its pitch) but that is not nearly so easy and quick as on guitar.

When I listen to Chiwoniso, I find her voice so amazing. Her karimba playing is good and has strong traditional roots, but her singing is just stellar.  She does something like a yodel, sort of a transition when jumping up from her “chest voice” into her “head voice” or falsetto. I do not have any proof, but I think that at some point, Chiwoniso realized she felt better singing in F# than in F, and I believe that it relates to the pitch where her voice breaks from chest voice into head voice.  That was likely a bridge she crossed long ago.

if you look up Chiwoniso on YouTube or Spotify and play her music, there’s a variety of stuff there, some with no karimba, some with karimbas or other instruments in another key, but most of her songs  are in F# (or the relative modes), and it is just a joy to jam along with her and learn her songs.

If you like Chiwoniso’s music, I invite you to retune your F karimba to F#.  YOU MENTION RETUNING THE KARIMBA BUT DON’T SAY HOW, OR WHY YOU AREN’T RECOMMENDING DOING THAT, OR HAVE A RETUNING LINK IN RELATED ARTICLES… While it is possible to tune a Hugh Tracey 17-note karimba down to G,  the 17-note doesn’t want to go down as low as F#.  So it is much better to start with one of the 15-note instruments and tune it up to F#.

We now offer the option of ordering one of our 15-Note F Karimbas in the key of F#, and we’ll do the retuning for you!

Mark Holdaway has been playing kalimba for over 30 years. He invented his kalimba tablature in 2004, and has been writing books and instructional materials for kalimba ever since. His business, Kalimba Magic, is based on the simple proposition that the kalimba is a real musical instrument capable of greatness. Mark's kalimba books are a down payment on this proposition.
PrevPreviousThree Modes in Traditional Karimba Music
NextChiwoniso MaraireNext