I know that there are too many types of kalimbas and karimbas to keep track of. But little by little, I can address that with my Facebook Live events.

Please join me for a Facebook Live Session on the Modern Karimbas on Aug 26 2022, 3-4 PM MST (which is 6PM EDT). There is a one-day only 40% discount coupon code that will be revealed there. 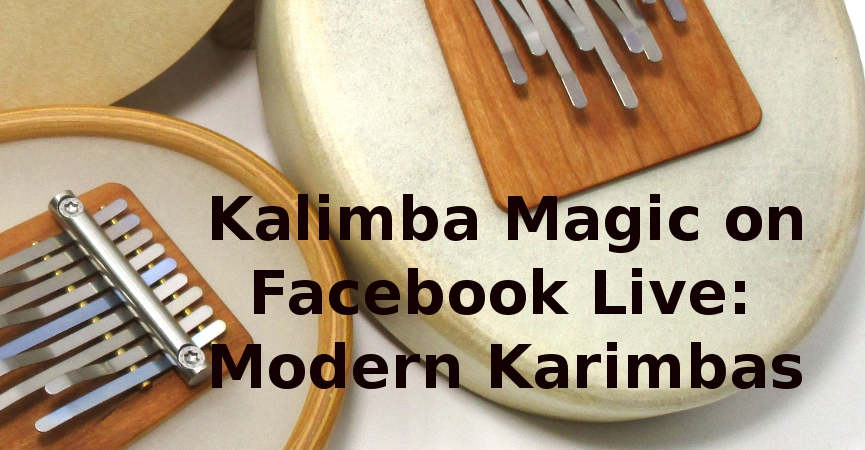 The “Program” is a 2 page PDF document that lists the karimbas I’ll be playing, in order. I also indicate a few items you should pay attention to – right index finger technique for example. There are also links to relevant articles and links to the various karimba and book product pages. 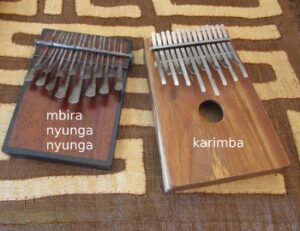 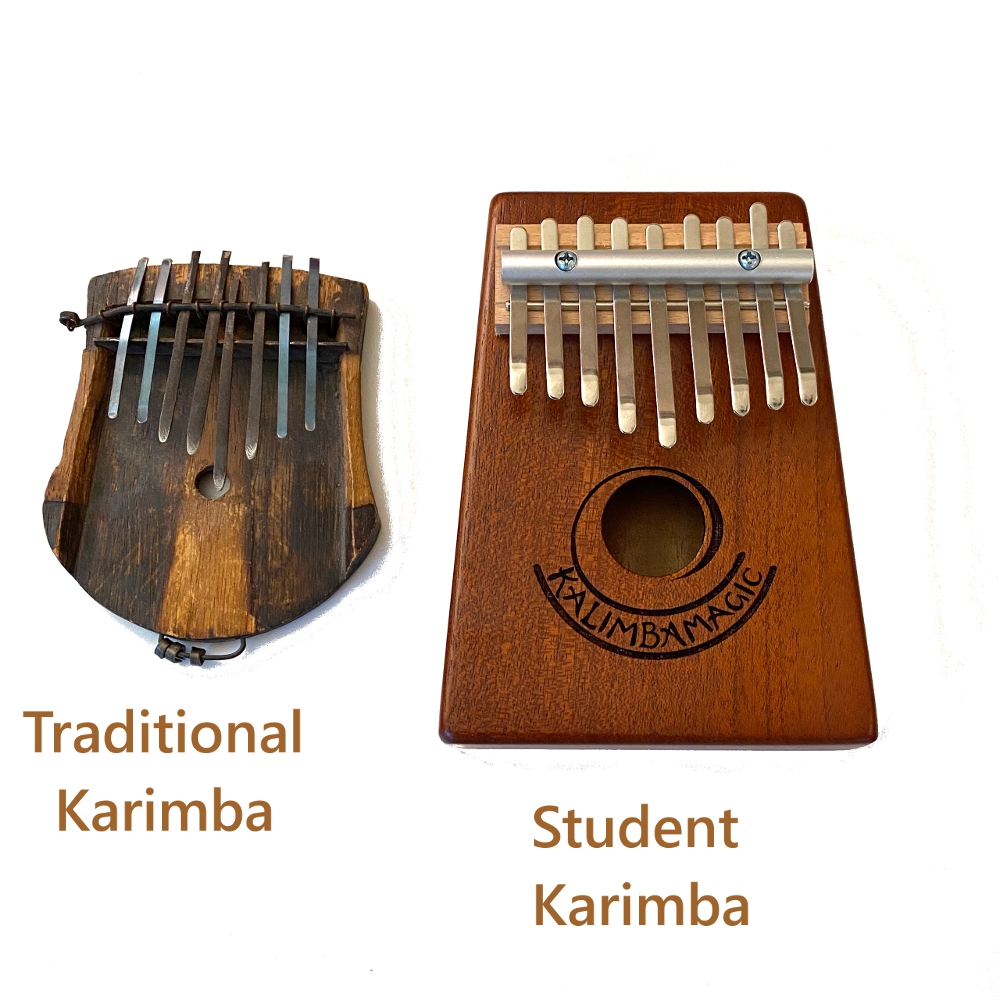 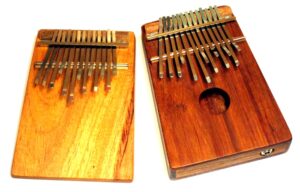 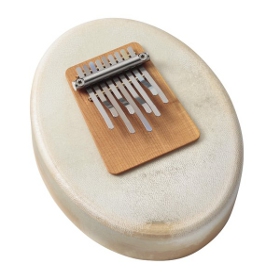 Around 2000, Peter Hokema was picking up after a kalimba jam. Someone had been using a frame drum to amplify one of the small kalimbas Hokema had made… and he plucked the tines just as he lifted the entire frame-drum-kalimba system, it went “wah”!  By the way, there are traditional African kalimbas that make the wah, so it really is 1000-year-old African Technology. But Peter Hokema took it to the next level. Of course, nine notes can be very limiting melodically or harmonically. The standard A minor tuning is very enchanting… but the next frontier is exploring wonderful exotic tunings! 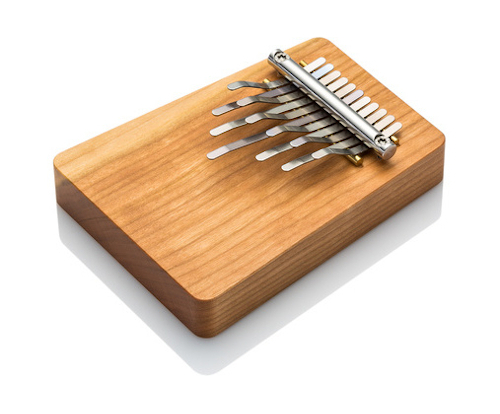 The Sansula was a remarkably successful kalimba innovation. To address the issue that 9-notes was very limiting (actually, the standard tuning has a redundant note, so there are only 8 independent notes), the 11-note B11 was introduced. Originally there was a model mounted on a larger frame drum (the B11 usually goes down to G, a whole step lower than the Sansula’s A, requiring a larger resonating body). But alas, 11 notes is still just 11 notes! So, there are more exotic B11 tunings! 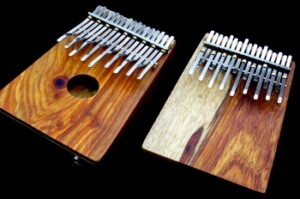 One of the most important players in the non-traditional Karimba game is the new age musician SaReGaMa. Through a series of YouTube videos and musical recordings, SaReGaMa took a single Hugh Tracey Afrucan-tuned Karimba, and created new tunings every month or so. He could fine tune the tuning over time, and he created new music for each new tuning. His most popular tunings include the Lotus, the Freygish, and the Air tunings. 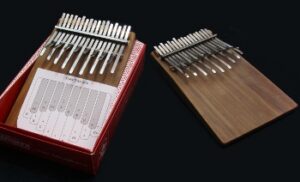 My own contribution to the Non-Traditional Karimba tunings is the Celtic D. It looks like the Freygish tuning, but it is in D major. 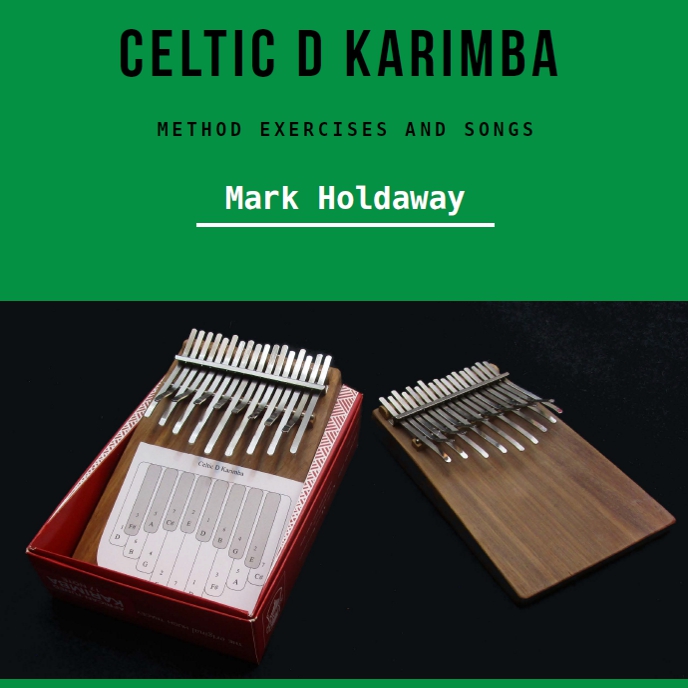 So, I will be performing something from the new Celtic D Karimba book!

My entire point: these are all wonderfully innovative instruments, and each tuning brings forth different musical possibilities. If you ever feel you are stuck and not making the musical progress you imagine for yourself, why not take a walk on the wild side? And get yourself a Newfangled Karimba!

Again, we recognize these exotic instruments have all grown directly from traditional African kalimbas. Last week, I showed you how the Africans were innovating the instruments – how they would evolve the karimba, and how they would add notes and possibilities. This week, I show you how a bunch of people outside of Africa have done the same thing, transforming the musical possibilities the each unique instrument. However, these non-traditional instruments lacked the constraint that they play the old traditional music, and this let them drift much further away from the root instrument.

Mark Holdaway has been playing kalimba for over 30 years. He invented his kalimba tablature in 2004, and has been writing books and instructional materials for kalimba ever since. His business, Kalimba Magic, is based on the simple proposition that the kalimba is a real musical instrument capable of greatness. Mark's kalimba books are a down payment on this proposition.
PrevPreviousBustu M’Tandari – Trad. African Karimba Song – On the 17/C Kalimba
NextHokema B11 Kalimba – Alternative Tuning StrategiesNext