I should have known better than to post a video of a kalimba in a strange new tuning, and then not also make that tuning available to everyone. Several folks have requested the Dajari-F B11 tuning, so here it is.

The initial plan for this year was to make instructional downloads for each of six exotic B11 tunings, to demonstrate the breadth of music that is possible on this otherwise unassuming but beautiful kalimba… but then Christmas came knocking, and with it came the creation of four new books of Easy Christmas Carols… to get this done, several items had to be put on hold including the exotic B11 project and the Dajari-F tuning.

We regret the delay, but now you are invited to explore this very clean and positive B11 tuning.

This tuning is named after an avid kalimba player in Seattle named Dajari Mekena, who commissioned this tuning. He has a hand pan type instrument tuned to F major, and he wanted a kalimba that played along with it. He sent a video of himself playing his hand pan, and I sat down with the B11 and listened, and tuned, and refined, until I could happily play along. At that point, I wrote down the tuning and put the B11 Elektra kalimba in a box and shipped it out 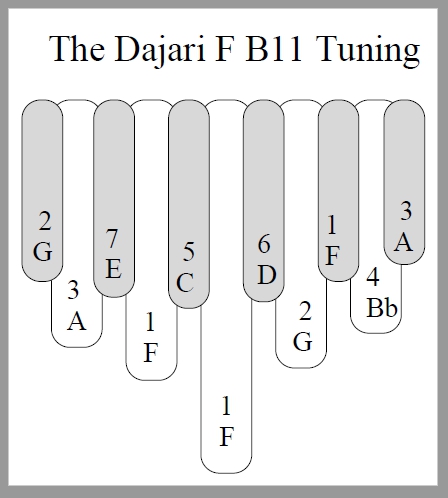 I thought that Dajari’s special tuning was a thing of the past, but the next morning I woke up with this little kalimba’s song stuck in my head. I tuned another B11 to “Dajari-F” tuning just so I would have it around. (Having access to the latest and greatest exotically-tuned kalimbas is one of the up-sides of living at Kalimba Magic. One of the down sides is that you have to watch where you step or sit, as kalimbas seem to have taken over.)

It’s not that complicated to get to the Dajari tuning from the standard G tuning, Seven tines do not change tuning at all, two tines change by a half step, the lowest tine changes by a whole step down, and the second lowest note changes by a step and a half up. 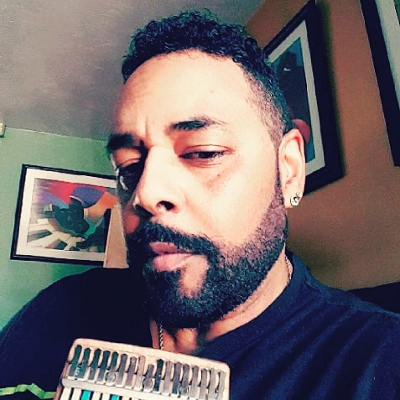 Mark Holdaway has been playing kalimba for over 30 years. He invented his kalimba tablature in 2004, and has been writing books and instructional materials for kalimba ever since. His business, Kalimba Magic, is based on the simple proposition that the kalimba is a real musical instrument capable of greatness. Mark's kalimba books are a down payment on this proposition.
PrevPreviousBuying Kalimbas for Kids: One Tine per Year of Age
NextEasy Christmas Music: 17-Note Kalimba in CNext