The tremendous assistance that kalimba tablature can provide in arranging and learning songs…plus a free CD or 25% coupon! 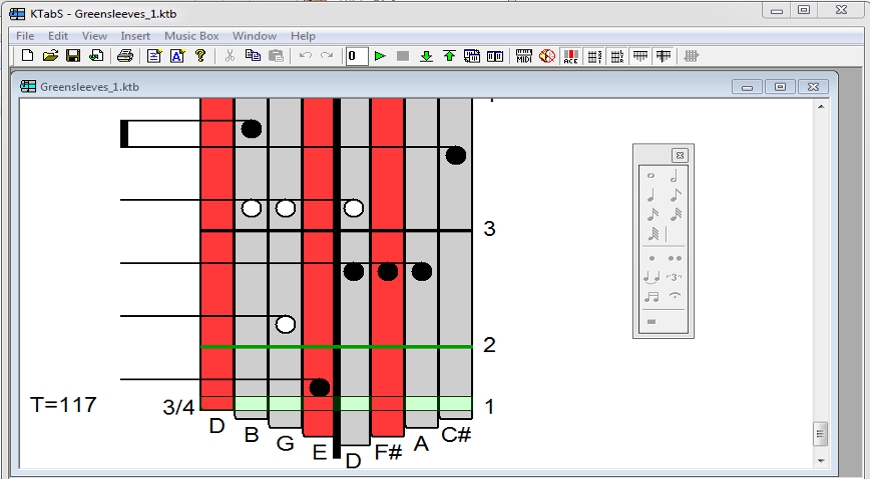 I have a symbiotic relationship with kalimba tablature:  I work really hard to notate really wonderful music in tablature.  Through working on this tablature, I come to be able to play music that is more difficult and more polished than I would otherwise be able to perform.

To get your free Greensleeves tablature PDF, which will work for 8-Note, Alto, or Bb Treble kalimbas, click the image above.

What is the best idea you have ever come up with?  Most people cannot point to one idea that eclipses the other moments of brilliance in their life.  Peter Hokema knows that his invention, the Sansula, a charming kalimba mounted on an eliptical frame drum, as his best idea ever.

The video playing near the bottom of this page shows how kalimba tablature works. To use the tablature I first color three of the eight tines on my Goshen Box 8-Note – the three tines that match the colored columns in the tablature.

The tab reads from bottom up.  It uses the standard symbols from musical notation – half notes, quarter notes, measure bars, etc – all laid on their sides. But instead of telling you which note to play, the tablature shows you which tine to play.  That eliminates a major step of “Oh my gosh, where is my ‘A’ tine?” and shows you exactly where to put your thumb.

By the way, 8-Note kalimbas are generally made in the key of C, but Mr. Goshen likes his kalimbas better in D.  Can you still use this tablature if you have an 8-Note in C?  But of course!  It matters not what key your kalimba is tuned to – it isn’t the notes, it’s the tines!  Since the geometrical patterns on the C kalimba exactly match the geometrical patterns on the D kalimba, it works perfectly.  On the other hand, if your kalimba were a mirror image of this one, with the highest note on the far right instead of the far left, you’d have to hold the tab up to a mirror to read it!

The tablature in this video is brought to life by KTabS kalimba tablature software, an excellent kalimba music editing program.

Whenever you see two, three, or four note symbols lying on the same horizontal line, that means you need to play them all at the same time to make a chord.   In general, the more black there is, the faster the notes need to come.  And also, I do not start the song on the lowest note on the instrument, I start on the second lowest note, E, or the second degree of the D major scale.  This means I am playing in E dorian mode, a minor mode (in case you are interested).  This also means that I am missing the high E, an octave above the root note I start out on.  But that doesn’t stop ME!

A few words about my creation process.  I woke up this morning, drank coffee, and sat down for 15 minutes of silent meditation.  While in meditation, I imagined this video.

I then went for my morning walk, about two miles of brisk walking, and I took my 8-Note Box Goshen kalimba along.  As I swaggered along in three / four time, looking a little drunk at 7 am, I pieced together the arrangement for the song.

When I got home, I sat down on my Windows 7 computer (sorry guys, KTabS isn’t up for Windows 10 quite yet), started up KTabS, set up the “red 8-note kalimba template in the key of D”, and started notating what I had figured out on my walk.  I do this by clicking on the tine on the screen I want to play, at the time I want it to be played.  I click on several tines to make a chord.  If I want the note to last longer or shorter, I select a different type of note.  If I have too many notes in a measure (for example, 3.5 beats in a three beat measure) KTabS alerts me to this.  And I can play back what I have written at any time to verify that it is correct.

After I have written the arrangement into KTabS, I adjust the tempo until it sounds right.  I then play the song back through KTabS, with the sound coming out my computer speakers.  I can play along with the  KTabS “player kalimba” on my computer screen.  If I am playing the wrong notes, I hear it, and I also see it.  And if I play something better than what I wrote, I can go back and change what I originally put into the tablature.  More often though, I will hear something great in my head that I cannot perfectly play yet.  I hurry up and put that music into KTabS… slow down the tempo… and then play it back and learn this difficult part as slowly as I need.   As I start to get that hard part, I’ll speed up the tempo gradually, until I can play the whole thing at the tempo I want.  You can guess exactly which part of this article’s accompanying video or tablature I am talking about, can’t you?  This little detour in the process was totally worth the time and trouble, in my opinion, because it made this piece of music better.

Now you know exactly what I mean by: “I make the tablature better, and the tablature makes me better.”  But here is the key: when I share this tablature with you, you can use it to learn, practice, and get better too!

After I learned and polished my new and improved Greensleeves song, I played it, recorded it, and captured it on video.  I added guitar to make it sound like Renaissance music, made a video of KTabS playing the song, and then put them all together.

And now, a quiz and the chance for a big reward: I can count four places where the written tablature does not quite fit the music I played.  (And I don’t mean one of the super-fast note sections.) The first five correct submissions that identify all four of the measures where the written music and the played music don’t match will get a free CD of my kalimba music.  If I don’t get any submissions that have found all four errors within two weeks, I will then consider entries that identify three errors, or even fewer if I need to.

So you may be wondering, is Mark’s playing in error?  Not to my way of thinking. The playing sounds great to me.  But the tablature isn’t in error either.  They just don’t agree perfectly.  Such is life!

Here is another challenge with a payoff for you. To introduce it:  In my mind, it is absolutely amazing that one can play Greensleeves on an 8-Note Kalimba.  There are three fundamental tricks that I employ in this piece that make it possible on the lowly 8-Note Kalimba (one of the tricks is isolated to a single spot, the other two tricks are used a few times each).  If you can tell me what those three tricks are, I will give you a 25% coupon code good for use one time on anything in the Kalimba Magic Shop.  I extend this offer to the first five people who can tell me what three tricks I used to play Greensleeves on an 8-Note kalimba.

Mark Holdaway has been playing kalimba for over 30 years. He invented his kalimba tablature in 2004, and has been writing books and instructional materials for kalimba ever since. His business, Kalimba Magic, is based on the simple proposition that the kalimba is a real musical instrument capable of greatness. Mark's kalimba books are a down payment on this proposition.
PrevPreviousTIP: Alto Kalimba – Accents can make a part stand out
NextTIP: Playing “Mahororo” on the African Karimba – 2 / 5Next