The Treble Chromatic is the one kalimba that can do it 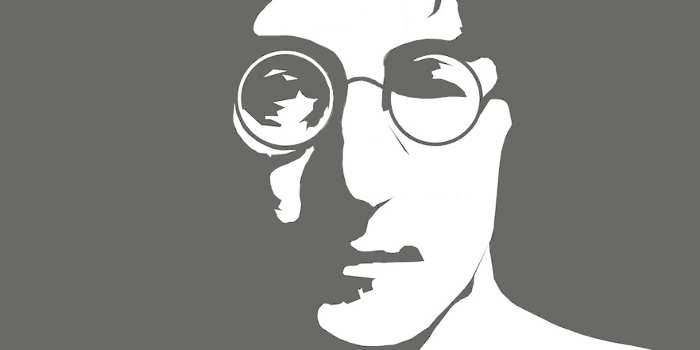 You can get a Chromatic Treble Kalimba and play “Imagine” yourself!

Recently someone told me that playing John Lennon’s song “Imagine” on kalimba was a goal of theirs. When I worked through the song in my head – I realized there is only one kalimba sold by Kalimba Magic that can play “Imagine,” and it’s the Hugh Tracey Chromatic Treble Kalimba.

There is an amazing Russian musician, Natalya Obukhova, who has a YouTube channel called LadyChugun. She plays killer electric guitar, accordion, and… chromatic kalimba.

And this amazing musician, LadyChugun, has figured out a great arrangement on the chromatic, and makes it look easy too. Check it out!

The Chromatic kalimba is a wonderful innovation based on the standard Hugh Tracey diatonic kalimbas such as the Alto and the Treble. Diatonic kalimbas play basically like the white notes on a piano. As long as a song stays in key and has no “accidentals,” you can probably play it on an Alto or Treble kalimba. (An “accidental” is a note that is not in the key signature and requires a “flat,” “sharp,” or “natural” symbol.  For the kalimba, though, this is a foreign concept, as “accidental” usually means “that note isn’t on the kalimba.”)

If a song changes keys or has accidental notes (as “Imagine” does) and you want to play it on a kalimba, you need a chromatic kalimba, which has all the notes of the scale, not just the piano’s white notes, but all the black ones too – the flats and sharps.  Hugh Tracey Chromatic kalimbas have the sharps and flats on their back sides, and the diatonic keys on the front sides. 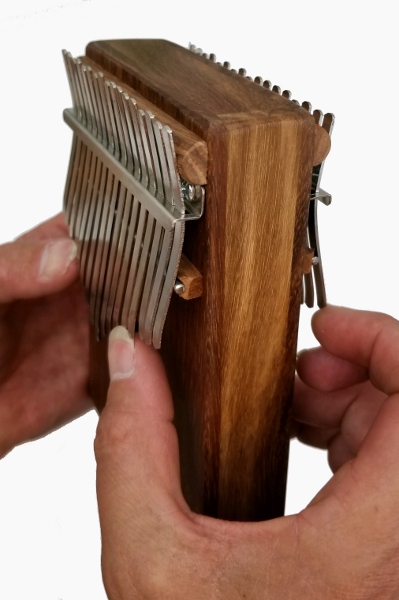 The Chromatic kalimba is much more challenging to play than the typical diatonic or pentatonic kalimbas. But if you like to play complex music, or are a vocalist, it is totally worth meeting that challenge. As compared to diatonic kalimbas, the chromatic kalimba has all the colors of the harmonic spectrum, the white notes and the black, and can therefore play any chord you want, and in any key. And because of this capability, pop, jazz and show tunes that have rich harmonies can be played on the Chromatic. It can modulate to different keys as well.

The KTabS tablature system for kalimbas is a fantastic tool for learning to play a particularly challenging song on kalimba. Not only does it show you which tines to play, in which order… but you can also hit GO and play along with the song, and you can decide whatever tempo you feel comfortable with. I have learned dozens of songs by first putting the notes into tablature, and then playing along with KTabS, moving to faster and faster tempos until I could play it exactly as I had imagined.

The KTaBS program will work for most people – the ones who use Windows 7 on their computers…KTaBS was invented years ago. However this situation will not last forever, and apologies to those who use Windows 10.

John Lennon’s “Imagine” is now in tablature for the Chromatic Treble Kalimba – a huge THANK YOU to Natasha Obukhova (aka Lady Chugun) for doing the hard work for us! 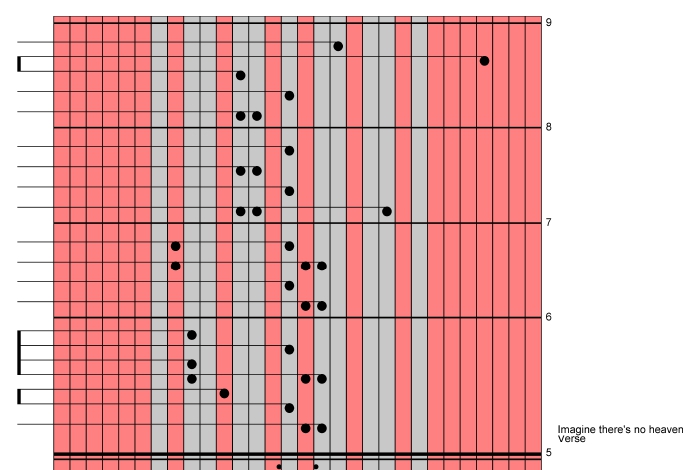 OK, if this very wide chromatic tablature blows you away, just sit tight. It does seem to have a lot of tines… and a LOT of red tines. The six red tines in the center of the tab represent the six painted tines on the front of the kalimba. But all of the red tines on both the far left and far right represent the back side tines (ie, the flats). Yes, it is true, chromatic kalimba tab is a bit dense. But look at the tab above – there is only one chromatic note in the first sung line of music – on the far right side of measure 8, in the accompaniment to the melody.

It’s easy if you try!

If you want to try your hand at playing “Imagine,” you need a Hugh Tracey Treble Chromatic Kalimba. And for the month of April 2018, use the coupon IMAGINE25 to get a 25% discount on any of the three models of Chromatic Kalimbas we carry.

Mark Holdaway has been playing kalimba for over 30 years. He invented his kalimba tablature in 2004, and has been writing books and instructional materials for kalimba ever since. His business, Kalimba Magic, is based on the simple proposition that the kalimba is a real musical instrument capable of greatness. Mark's kalimba books are a down payment on this proposition.
PrevPreviousInterview with Forward Kwenda
Next“Making Lamellaphones” by Bart Hopkin and Richard SelmanNext