Home > Blog > Item > Where did all the kalimbas go?

Where did all the kalimbas go?

Surging in popularity now, kalimbas arrived long ago and then all but vanished 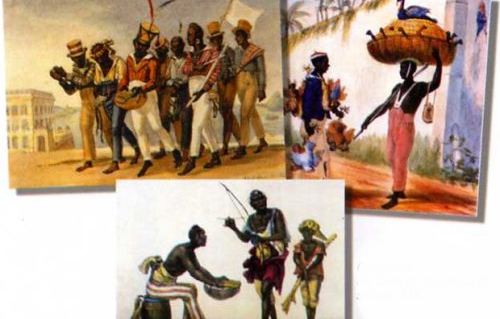 French painter Jean-Baptiste Debret depicted many scenes of Africans in Brazil, including these images with Kalimba! (From Decio Gioieli’s CD)

Kalimbas had been common in many, widespread places, having come along with Africans when they were torn from their native lands by slavers. How and why kalimbas disappeared is a sad and complicated tale.

Today, the kalimba is more popular than ever. People all over the world are creating original, unique kalimba designs. People everywhere are doing exactly what the people of Africa always did with the kalimba over the last millennium: adapting it to play their own musics.

The kalimba is ever so much more popular these days for many reasons: playing it is a uniquely peaceful activity. It is small and very portable. It brings joy, mindfulness, wonder, fun, and a sense of stillness to the mind. A good time playing the kalimba with a partner is among the all-time best experiences of my own life. How could this beautiful little instrument have been lost?

When Africans were forcibly brought to the Americas as slaves, they brought kalimba-making know-how with them. The existence of kalimbas was documented in several places in the New World –  Surinam (on the northeast coast of South America in 1772), Brazil (1816), New Orleans (1890s) and the Caribbean islands. I contend that the kalimba likely existed in many more locations across the Americas. The kalimba was only documented in Surinam and Brazil because educated European visitors happened to see and hear lamellophones and write about them and/or depict them in paintings. The rich slave owners and traders either did not see the kalimbas, or they considered them unworthy of attention.

I imagine myself living the harsh life of a slave, with perhaps this one little prized possession – a kalimba – to sing sweet songs for myself and my loved ones, and to echo back to the lost traditions of the land of my ancestors. Such a cherished possession might be kept well hidden, and would not generally have been seen by documentarians.

But of all the places where kalimbas were seen by Europeans, the kalimba only remained in one – it has been played continuously since then in the Caribbean islands, in two forms – the rumba box or marimbula (bass kalimba), and the small hand-held kalimba. But the instrument entirely disappeared from Brazil, Surinam, and New Orleans, and anywhere else in the Americas as far as is known.

We might get an idea of why the kalimba disappeared from so many parts of the New World by looking at what is happening in Africa today. Through the 1930s, 1940s, and 1950s (that is, at a time before western culture had co-opted African music in ways such as replacing traditional African musical scales with the equal tempered notes of the western scale), Hugh Tracey documented over a hundred different types of kalimba – each representing some sort of tradition, playership, and repertoire.

Some of these documented kalimbas may have been individual creations played in individual styles. But likely the vast majority of those instruments were from living musical traditions with many people across many generations playing songs on one or another particular style of kalimba. And then there are the instruments that we know have both broad and deep musical roots –  instruments such as the mbira dzavadzimu and the karimba, which seem to have been played for around 1000 years, and certainly today there are more mbira and karimba players on earth than ever before. These instruments’ popularity is a sign that their music will carry on into our collective cross-cultural future.

But not every tradition is so lucky. There were lamellophone traditions in Africa that once were healthy, but they cannot carry on because the youth are no longer playing kalimbas. Each of the musical traditions around the various different kalimbas have varying levels of robustness; it is a sad fact that the pressures of modern life have killed some of these traditions.

Let’s bring the story back to the Americas, where Africans brought the kalimba to many locations. Why did the kalimba disappear? In many places in the Americas, slavery started out somewhat permissive, but turned more oppressive as the system of slavery matured. Before the mid 1700s, slaves were often allowed to build and play drums, but revolts and consequent crackdowns changed the situation drastically, and when slave masters and overseers realized that drums could be used for secret communication, drums were entirely banned. Suspicion and cruel treatment became normal. While such an atmosphere would not have eliminated all kalimbas, it would have made it much harder to continue their use. Passing on kalimba-making and kalimba-playing information to the next generation would have been difficult or impossible in such an oppressive environment. Pounding metal for kalimba tines would have been noticed. And so it is easy to see that as the monster of slavery grew in oppression, it’s reasonable to imagine that the kalimba may have fallen victim.

Furthermore, as slavery matured in the Americas, there was less emphasis on the international slave trade, so a shrinking proportion of living slaves had been born in Africa and thus exposed to living kalimba traditions in their natural environments.

A sad and terrible chapter in the story of humanity.

Back to today: play your kalimba, your karimba, and your mbira proudly. Let them ring long and loud for the whole world to hear. These instruments live on, both rooted in their old traditions and also blossoming forth into new traditions of our own creation. Such a beautiful, uplifting, healing instrument – may it never disappear again!

Mark Holdaway has been playing kalimba for over 30 years. He invented his kalimba tablature in 2004, and has been writing books and instructional materials for kalimba ever since. His business, Kalimba Magic, is based on the simple proposition that the kalimba is a real musical instrument capable of greatness. Mark's kalimba books are a down payment on this proposition.
PrevPreviousNew, Free Variations to Accompany the Karimba Song “Wa Kalulu”
NextTIP: Playing “Mahororo” on the African Karimba – 1 / 5Next