“Vitamin K” and Falling in Love with the African tuned karimba

Learning tablature, and a new book, opened up the exciting and beautiful world of traditional African songs. By leslee morrison 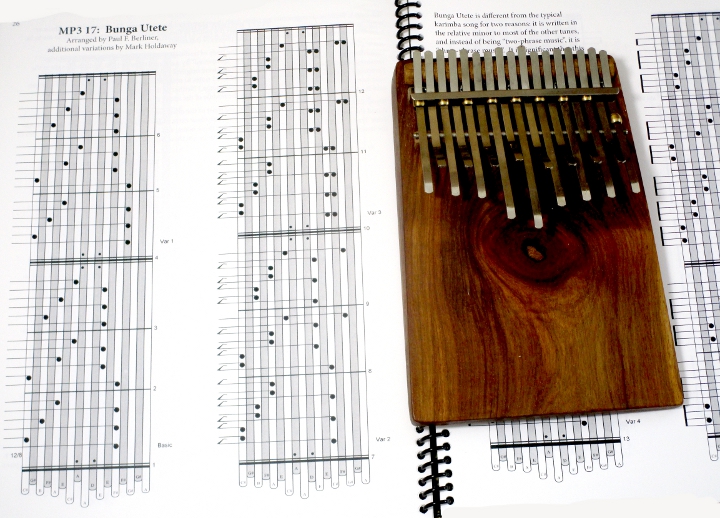 For me, learning the African tuned karimba with its repertoire of ancient African music is an  infusion of new excitement and inspiration in my playing. I call it “Vitamin K”. The instructions that came along with my new Hugh Tracey 17-note karimba said that it is a beginner’s instrument; but with 17 tines instead of the 11 that I was familiar with, and with the additional “buzzers,” I discovered that a lot of new and exciting sound can come out of the karimba, far beyond what I experienced with my other kalimbas.

At first, the karimba’s two rows of tines (instead of the one row that other kalimbas have) seemed complicated, but now, I’m happy to have much more capability, like having white and black keys on the piano for additional notes and layering of harmonic sounds.

There are two main components in my introduction into the amazing world of playing traditional African music on my karimba. They are learning kalimba tablature, and Mark’s recently published book “About 30 Traditional African Songs for the Hugh Tracey African Karimba.”  The book has given me gorgeous songs, and it provides tablature for each song, which has made it possible for me to actually learn and play those songs myself.

Learning karimba tablature has opened up a door to unlimited music potential for me. Instead of being limited to the patterns that I knew from the past, or what I could figure out on my own, the tablature and the book are revealing a new universe that spans centuries of African musical genius and timeless vistas into the African mind.

When I first looked at the tablature, it reminded me of a strand of DNA. It seemed tiny and encoded, but I knew that it contained the precious strand of logic of so many special African songs. Would I be able to crack this complicated code?  Would I ever be able to comfortably “swim” in this notation? However, after spending a day or two learning a song from tablature, suddenly I’m asking myself, “What was so hard about that?” And I am already looking forward to learning the next song.

My right brain wants to resist the effort of creating new neural pathways through practicing and learning new songs from the book; my right brain would be very happy to just run around and have unstructured fun.  But when I hear traditional karimba songs, I find them so beautiful.  It’s not hard to realize that it is definitely worth the effort to delve into the tablature and give my left brain a workout, going through step by step to learn exactly which notes I need to play to make the song.

Having both tablature and  “About 30 Traditional African Songs for the Hugh Tracey African Karimba”  has expanded my playing in a way that I could not have experienced without them. And in addition to the book with its printed music and tablature, all the songs in Mark’s book are accessible online as audio downloads, to hear whenever I desire and to listen to as I read the tablature, and this is also really helpful in learning new songs.

By the way, most of the karimba songs have short phrases that are two or four measures long – little nuggets of music that are not difficult to learn. These phrases are played several times, and then you switch to a variation of the phrase.  When I am first starting out on a song, I may just repeat one phrase over and over, until I get it, and then move on. I can spend a day or two learning each variation. Thus, in learning these phrases that are self-contained, bite-sized bits of music, I can get a sense of accomplishment with each variation I master. I like this concept of “cyclic music”. It is a comforting thing, to keep repeating some striking and/or beautiful phrase on the karimba over and over, which at the same time helps me develop the rhythm, familiarize myself with thumb positions, and feel rewarded for the time spent.

I have noticed that I bring experience from other instruments to my karimba playing. For example, I realized that I use a steady rhythmic alternating bass line on the kalimba – which I am sure I transferred from the thumb-plucked bass lines that I used to play while finger picking my guitar, probably an influence of early Leo Kottke. I also bring a sense of rhythm from my history with percussion to my playing.  Years ago, I learned African djembe. (I was also good at “dashboard drumming” while listening to the radio.)  Mark pointed out that I have a way of swinging my notes in a bluesy style that is somewhat unique to my playing.

I find that having a rhythm in mind before I start to play kalimba helps me to create my own music.  The rhythm defines WHEN my thumbs are playing, but doesn’t specify WHICH tines to play in a melody.   Just by starting out with a rhythm is half the battle, and then I have fewer things to figure out when improvising a melody.  Further, the rhythms have a built-in “handedness” – that is, the rhythmic pattern also dictates which thumb will play each note.  I typically alternate thumbs, but sometimes I get tricky and syncopated.  So, with my understanding of the rhythm and the “handedness”, I find it an easy step to complete the new music by choosing actual notes to play.  In fact, that is the whole fun of it, as I discover which melodies and combinations of notes I like.

I love my karimba’s portability. It’s great to be able to pack the karimba and bring it along in any setting.  I can take it with me on my walks, or in my backpack when I ride bike.  Or I can easily take it on camping trips or just throw it in the car when I am out and about running errands.

My new karimba has a pickup, which means I will be able to amplify and play along with others someday.  I am looking forward to that day when I have enough confidence in my playing that I will stand alongside djembe drummers, plug the karimba into an amplifier, and jam away with them!

In conclusion, I find that the “About 30 Traditional Songs…” book is a great way to dive into gorgeous African music fairly quickly. Tablature is not nearly as hard to learn as it seems at first. Having the book puts the sheet music in front of your face in type that is large enough to see and work with. Plus, having the option of seeing the (downloadable) book on your computer’s screen means you can take it with you anywhere you have your electronics and print out what you need as you go. I like the benefits of having both options.

Mark Holdaway has been playing kalimba for over 30 years. He invented his kalimba tablature in 2004, and has been writing books and instructional materials for kalimba ever since. His business, Kalimba Magic, is based on the simple proposition that the kalimba is a real musical instrument capable of greatness. Mark's kalimba books are a down payment on this proposition.
PrevPreviousTIP: Playing “Mahororo” on the African Karimba – 4 / 5
NextLa Medicina Meets La KarimbaNext