Three tines need to be retuned on the Freygish Karimba

The SaReGaMa-tuned Karimbas are one of the coolest developments in the kalimba world in recent years.  This article shows you how to make the Lotus-tuned Karimba and the Freygish-tuned Karimba sing together!

I was walking through the Arizona desert last summer with my friend Serena Gabriel.  I held the Freygish-tuned Karimba in my hands, and she held the Lotus-tuned Karimba in hers, and we played as we walked down a dry wash.  These two karimbas were working pretty well together, but they weren't quite sounding right in places because the Lotus has three B flat notes while the Freygish Karimba has three B natural notes.   Before I had gone 100 steps into the desert, I decided I would pull my three B naturals out a half step and turn them into B flats.  This made a huge difference in the music we could make together. 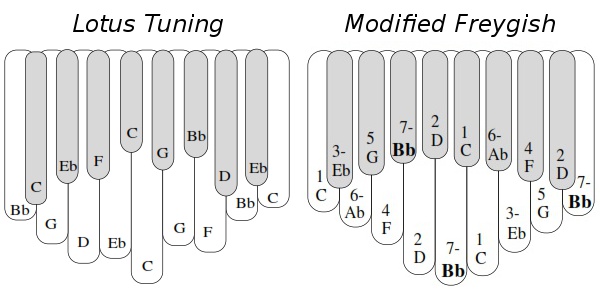 To the left in the diagram are the notes of the Lotus-tuned karimba.  The tines almost form a scalloped shape with shorter tines (higher notes) landing between longer tines (and lower notes).  This is a very idiosyncratic tuning.

To the right are the notes on the Freygish-tuned Karimba after I pulled the three B naturals out to B flats. If you have never attempted a retuning, this is a fairly easy one to do. This tuning is a very regular one, and you alternate Right-Left-Right-Left to go up or down the scale.

Another interesting aspect of my interaction with Serena that day was how the two different karimbas lent themselves to creating different sorts of music. On the very regular Freygish Karimba, I was playing a lot of chords, often concentrating on lower notes, creating the form of the song, and leading Serena with the structure of the harmonies. On the very irregular Lotus Karimba, Serena was concentrating on fast single note melodies that jumped around a lot, focussing on the higher notes, and playing interesting rhythms. We created a beautiful, ethereal thing, with my playing guiding and supporting, and the sound of Serena's Lotus dancing lightly and gorgeously above and around that of my Freygish. The different roles we played worked together really well, and we had a blast!

Getting to a place where you can be spontaneous is a wonderful accomplishment. Practice, and play around with your instruments too...be open to the give and take, relax, let it flow!