Three Is a Magic Number, “Schoolhouse Rock!” was a magic series

The Very First Episode of “Schoolhouse Rock!” in 1973 Had an Alto Kalimba in it!

From the opening of “Three is a Magic Number”

Listening to NPR this week, I learned of the passing of Bob Dorough, the dude who wrote all of the songs in the TV segment Schoolhouse Rock!

I was born in 1962, and Schoolhouse Rock! was on TV from 1973 to 1985. I am sure I saw every last episode of the series, each dozens of times. If you wanted to watch cartoons on Saturday morning, you had no choice but to see them.  And they were pretty amusing to watch, as the animation matched the cleverness of the songs.

Yesterday, listening to the Fresh Air program on NPR, mostly a replay of Terry Gross’ 1982 interview with Bob, I got to relive a part of my childhood that I had recalled a number of times but never really appreciated.

Bob Dorough was a pretty hip cat who could spin just about any lyric, melody, or groove. An advertising exec had called him in because his own son could sing along with any Jimi Hendrix or Rolling Stones song, but didn’t know his multiplication tables… if someone would write hip songs about multiplication facts, millions of kids might escape the future of being numerically illiterate. And so, from the brain of Bob Dorough was born Schoolhouse Rock!

The very first song in the series was “Three is a Magic Number,” written in 1973, and performed by Mr. Dorough. It opens with an electric piano playing three triad chords (triads are chords containing three notes), the I, the IV, and the V chord, and as each chord is played, a rabbit ear extends from a magician’s hat. (If you don’t know what the I, IV, and V chords are, just listen to the opening of the video, and then you will understand. It is sort of the Father, Son, and Holy Ghost of music.)

Yes, if you are reading these words there is a really good chance that you have seen this video… and maybe an even better chance that you never heard the kalimba in this song.

The kalimba comes in at 0:16 in the video – first playing arpeggiated triads solo, then to counter the electric piano and acoustic guitar. And the kalimba is really the core of the groove, persisting through the entire song.

But most people who heard the kalimba in 1973 had no clue what it was. This is still the case. Every few weeks, I get a call from someone wanting to get a kalimba, and they tell me they’ve been hearing this magical sound in different songs, in a commercial, or somewhere… and then they somehow figure out “Oh, its a KALIMBA! And I need to get me one RIGHT NOW!”

In 1973 when “Three is a Magic Number” first appeared on TV, the Hugh Tracey Kalimba was a pretty hot commodity among people in the know.  Maurice White of Earth, Wind, and Fire had been playing and performing on kalimba for several years at that point, but his song “Kalimba Story” – which explicitly named that magical sound – would not come out until 1974.

Listening back, I can tell this is the Hugh Tracey Alto Kalimba. But the Alto Kalimba usually comes in the key of G, and “Magic Number” is written in Eb (E flat). Why?

Probably Bob Dorough put the song in Eb so it would work perfectly for his voice. Eb is a great key for horns such as trombone, trumpet, saxophone, and clarinet (other reasons why someone might write a song in Eb)… but those instruments are absent in this recording. Or maybe it was just an inside joke, akin to the three triad chords in the intro – the key of E flat has three flats. Of course!

Most kalimbas are diatonic instruments – meaning they play the notes “Do Re Mi Fa So La Ti Do,” over one or two octaves, in one of the 12 different keys. The Hugh Tracey kalimbas usually come tuned to G. But it is also really simple to retune most kalimbas.

How would one retune from G to Eb? First, consider the way I would NOT do it: Eb is two whole steps (or 4 half steps) lower than G. So the obvious thing to do would be to make all of the kalimba’s tines longer, and hence lower, such that they all played two whole steps lower than the original tuning. However, if you try this, you will find yourself pulling the tines out… until they just fall out of the instrument. No, Virginia, the tines are not long enough to go down two whole steps.

Now, let’s imagine a really motivated person who went out and got longer tines that could be tuned two whole steps lower than “factory G” tuning. They would still run into problems, because the resonant box of the Hugh Tracey Alto is designed to resonate well with the low G of the Alto kalimba. But if you pull your tine out a whole step to F, the note doesn’t resonate so well. The low F is about half as loud as the G. And worse, the tine’s overtones, which on a kalimba do not harmonize with the fundamental tone, are actually LOUDER because the energy doesn’t go into the fundamental tone. And if you did have that magical extra long, extra low note that could go down to E flat… well, it might be only a quarter as loud as the G of the standard tuned Alto kalimba… and it would sound pretty bad.

But wait, there is another way to retune to Eb that actually makes a lot more sense, sounds a lot better, and is actually much easier. It requires only that some of the notes be retuned by a half step. We do this by going around the Circle of Fifths. 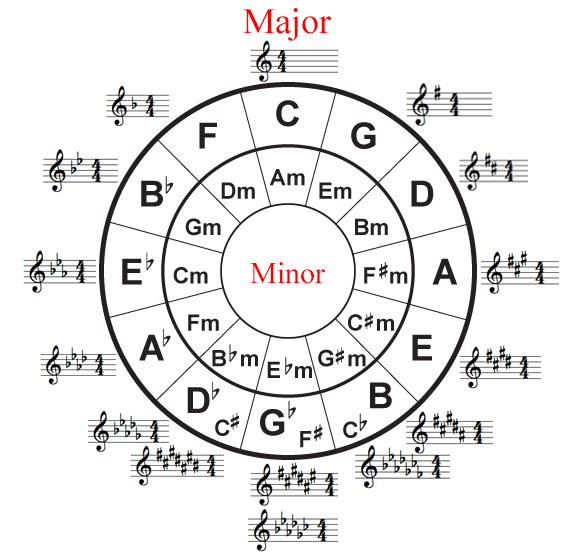 The “Circle of Fifths” is one of the principle constructs of western music. I’d call it a “key construct,” but that would make you groan. It represents the fact that the key of G and the key of C, even though they seem to be far apart, actually share all the same notes but one. To go from G tuning to C tuning, just change your F# (F sharp) tine(s) to F natural.

As you make one step clockwise in the Circle of Fifths, if takes you up a 5th (eg, from C to G). Going counterclockwise, you go down a 5th, which is the same as going up a 4th. (If you don’t understand the last sentence, it is a very important one to get, so spend some time with it over the coming hours, days, or weeks. Check out the link below about it.)

The downside: on the Alto kalimba, the low note is G, the root note… but if you change to C by retuning F sharps to F naturals, you still have the G in the bass. Any songs you learned on the G Alto kalimba can no longer be played on the C Alto without totally relearning from scratch… in fact, locations are very different too: C Alto’s root note (low C) is on the left side, while the G Alto’s root note is on the right, so your left and right hemispheres have to learn each other’s parts.

The upside: There are thousands – tens of thousands? – lots and lots of songs that start on the low 5 and go up to the root – or G to C on the C Alto. “Amazing Grace” is the poster child for this type of song. So, retuning in this way has its up sides and its down sides.

Now, just to be complete: the next notch around the Circle of Fifths takes you to the key of F, and you accomplish this by tuning your B tines down to B flat. One more notch takes us to Bb, which we accomplish by tuning the E tines down to E flat.

And finally, that studio cat who was playing kalimba on “Three is a Magic Number” had to have three flats on his instrument, and the A tines were tuned down to A flat.  In summary: F# to F natural, B natural to Bb, E natural to Eb, and A natural to A flat. That is four tines per octave, or eight tines over the two octave range of the Alto kalimba. Tuning on the fly, I can tune down half a step on one tine in about 15 seconds, so it would take me about two minutes to retune. (Now, if I were retuning this on a kalimba I was shipping out, I would be a bit more precise, and it would take me more like 10 minutes. And I admit I have been around this block a few times, and I just may be a bit quicker than most anyone else.)

So: if you need a kalimba in Eb, or F#, or E, or D… you now have the tools you need to accomplish this retuning yourself.

Or, you could leave it to the pros at Kalimba Magic and we’ll put the kalimba into the key you need in a most reasonable manner that will sound good and be reasonable for you to play.

And I should note: Kalimba Magic is one of only a very few kalimba sellers that will go to the trouble of figuring out what tuning you actually need, how best to accomplish this, and then do retuning for you.

Best to you on your kalimba journey!

Mark Holdaway has been playing kalimba for over 30 years. He invented his kalimba tablature in 2004, and has been writing books and instructional materials for kalimba ever since. His business, Kalimba Magic, is based on the simple proposition that the kalimba is a real musical instrument capable of greatness. Mark's kalimba books are a down payment on this proposition.
PrevPrevious“Making Lamellaphones” by Bart Hopkin and Richard Selman
NextThe Hokema Kalimbas have Gone Electric!Next