The Brain and the Kalimba – 2

Can you really pay attention to two things at once? You can, but it’s a skill you have to cultivate 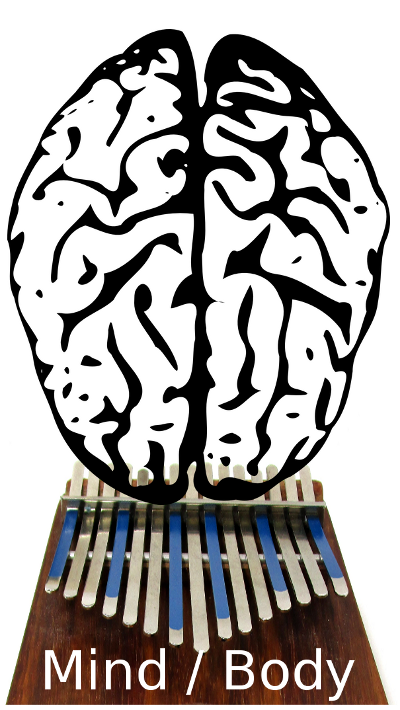 When I was 24, I finally learned how to talk and play guitar at the same time.  Until then, when playing guitar, I could hear what was being said, and could understand it, but I could not speak or even answer simple questions.

And how, exactly, did I learn to speak and play at the same time?  And what does that have to do with the kalimba?

I actually learned how to do two things at once – playing guitar and talking to someone – by doing a trick.  I would simplify the guitar part and repeat it – put it on autopilot so I would not have to decide anything about what to do next with the guitar.  I put all my real attention into what I was trying to communicate through speech.

Learning to pay attention to two things at once is like building up a muscle.  Eventually, the muscle gets a lot stronger, and it becomes more natural. After doing it for a year or two, it begins to seem as if I have two minds inside my head.

I am a new player of the big traditional African lamellaphone called the mbira dzavadzimu, or more simply, the mbira.  Even though I have invested hundreds of hours into playing the mbira, I am really not that familiar with it.  I actually find it incredibly frustrating to play, as I seem to only be able to focus on the left hand or the right hand, but not on both at once.  When I try to focus, I find that I can only focus on one thing at a time.

But I know what is possible in terms of my own attention.  When I play kalimba – admittedly a much simpler instrument with fewer tines and a more regular structure that I have played for many thousands of hours – I find that I very quickly get into “the zone”.  When I am in “the zone”, I am relaxed.  The music seems to be passing by relatively slowly, and I can almost reach out and touch the notes as they come by.  I can play around with replacing one note with another.  I can play around with speeding up the music if I want.  Nothing fazes me when I am in “the zone”.

But the really cool thing is that when I am in “the zone”, I find that my attention is not pinpointed on the left or the right hand and the music they are making – rather, I find that I seem to be floating above the kalimba, a bit distant from it.  It is as if I am not holding the instrument, but someone else is.  From this perspective, I am able to pay attention to both left and to right in equal amounts, at the same time.  From this perspective, I see how the two parts of the music fit together.

But more important than being in practice, I find I need to sit with the instrument for a long time TODAY, right now.  As I play longer and longer in one sitting (or walking), I find that I do become more relaxed.  I slowly stop paying attention to the difficulties of the song – the mistakes I keep making, or the way the instrument feels heavy in my hands.  I stop noticing the hunger in my belly or the pain in my big toe.  And I start to perceive a unity – a unity of my body with the music, a unity of left and right as my perception slowly levitates above my instrument.  At the very least. this is getting in touch with my peripheral awareness as I begin to let go of my focused awareness.

These days, I have been playing mbira for at least an hour a day for several weeks.  It now takes me about 30 minutes of playing to get in the zone where I can pay equal attention to left and right thumbs and their patterns.  I will go in and out of the zone, lightly touching for 10 or 20 seconds at a time.  But I am there!  I gently touch both hands with my mind, in equal measures.  And I know the song well enough that I know in advance which tines the thumbs must travel to.  I am prepared, and confident, and mindful for those few seconds, and then it slips away and I don’t quite know what note comes next or where my hand is going next.

And then the real magic happens: at this point I often find that my thumbs know their own way.  My brain is no longer consciously directing the thumbs where to go, it has “fallen off the horse” and I should have stopped playing.  But instead, my thumbs magically jump to the right tine on their own, in the right rhythm.  This is good.  It is very good when this happens.

There are so-called “split brain” people, who have had their corpus callosum (the bundle of nerves connecting left and right hemispheres) severed to reduce epileptic seizures.  They go about their lives remarkably normally, but sometimes one hand will button their shirt while their other hand unbuttons the shirt.  Each of their hemispheres has a mind of its own, and each decides for itself what to do, free of the connection between them that everyone else has.  Given that we are each really a “committee of two” (hemispheres), it is a tribute to the corpus callosum’s role that we travel through life looking very much like an individual with a single will.   But really, each hand has its own controlling intelligence.  Those controlling intelligences are within and (usually) beneath the “me” who says “Let’s play louder, let’s speed up, let’s slow down, let’s stop now and have a sip of beer”, but I really do feel that we have two intelligences within us, each controlling a hand and what it plays, and that we can build skill in allowing them to work without being distracted by signals from the other side.

Mark Holdaway has been playing kalimba for over 30 years. He invented his kalimba tablature in 2004, and has been writing books and instructional materials for kalimba ever since. His business, Kalimba Magic, is based on the simple proposition that the kalimba is a real musical instrument capable of greatness. Mark's kalimba books are a down payment on this proposition.
PrevPreviousThe Brain and the Kalimba – 1
Next1000 Kalimbas, Almost Ready To GoNext