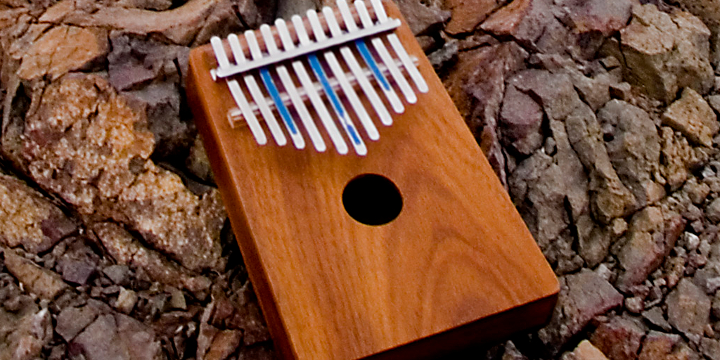 This article walks you through four different possible retunings for the 11-note pentatonic kalimba. So, if fear or uncertainty were preventing you from taking the plunge and retuning your kalimba, you now have the tools and guidance to jump into the river and baptise yourself in the flow of ever-changing musical possibilities. Really – once you begin to explore new tunings, it’s a whole new world!

The essentials of tuning your kalimba: the tines are held in place via friction, and you can slide any tine to change its pitch. Pushing a tine in will make the vibrating length shorter, thus causing it to vibrate at a higher frequency, which creates a higher perceived pitch. Pulling it out will increase the vibrating length, causing it to vibrate at a lower frequency, or a lower perceived pitch. It helps to have a “pitch reference”, and electronic tuners are inexpensive and very helpful. And always respect the metal tines of the kalimba, which are stronger and sharper than your fingers.  Follow the link below if you need to know more about tuning:

Learn About Tuning Your Kalimba

Whenever you move a tine – left or right, in or out, you may unexpectedly excite a buzz. A buzzy tine is one that is making cranky noises, perhaps with overtones that jump in and out, or some unwanted higher frequency overtones. Fortunately, just as moving a tine around can make buzz come into being, moving the tine around is the first thing you try when attempting to fix the buzz.  I think we are up to five different buzz abatement techniques now.  It is good to know about these if you start playing with alternative tunings:

Learn All About Fixing Buzzy Tines

Now we are ready to explore some different tunings! 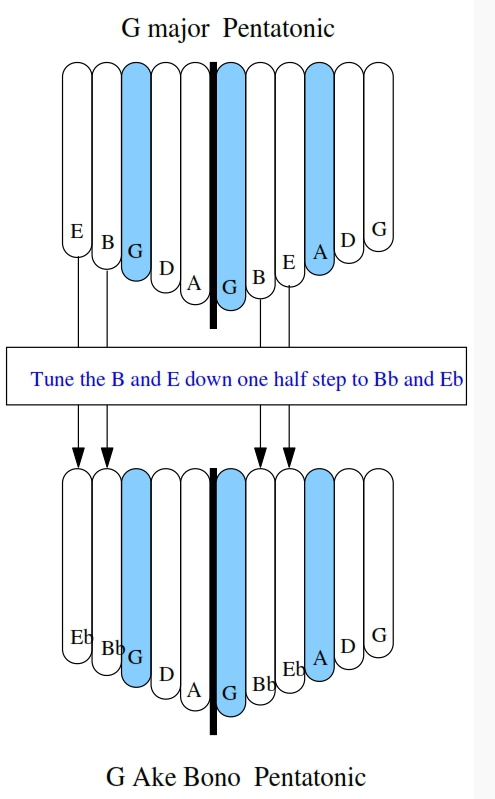 Retuning from the standard G major pentatonic scale to the G Ake Bono scale is a very simple operation. Four notes, the B’s and the E’s, must be pulled out slightly to lower the pitch of each by a half step. If this is your first try at retuning, pull just one of the tines out a bit, till you get it to the right note, and then push it back up to the original note. This will give you confidence that you will be able to get the instrument back into its original tuning later if you want to.

The Ake Bono tuning represents an ancient Japanese scale, and it is emotive in different ways than any of the other pentatonic kalimba tunings. You cannot find it, or its flavor, hidden in the standard G major pentatonic tuning. Ake Bono is a fundamentally different kind of scale. It is the scale of the song Sakura.

I find the G minor pentatonic tuning quite exotic, and playing in this tuning inspires wildness in my soul.
It should be noted that the minor has a relative major, and Bb is the relative major of G minor. That means you can play the major pentatonic scale by starting on Bb instead of G.

Generalized: on any major tuning, you can also access the minor scale, and on any minor tuning you can always access the major scale. However, the question is: what sits naturally on this kalimba? What scale just pops out without you thinking about it? On the G minor pentatonic tuning, it is the G minor scale that pops out. You don’t have to work to get this scale, it is just right there. 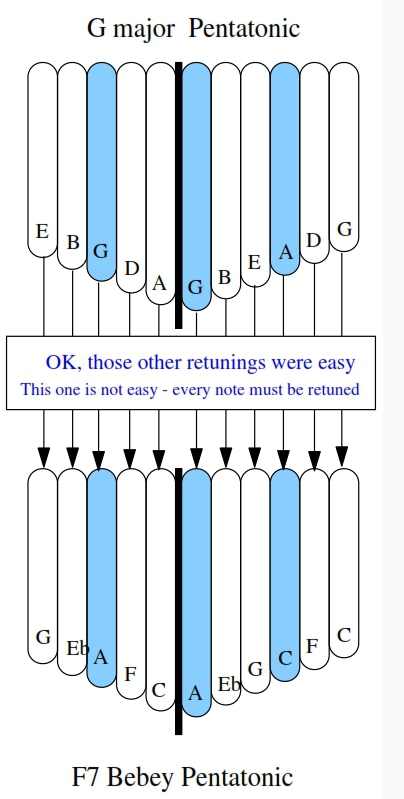 The F7 Bebey Tuning is a pentatonic kalimba tuning that Francis Bebey used on his song Breaths. I have found it to be a wonderful tuning. Although you’d think that being in the key of F, it should sound lower than the G scale, the lowest note is A, or the 3rd of the scale. Why didn’t we put the 1 in the lowest note? Because then we would not have had enough room at the top for the soaring high C that rings like another instrument all together. (Note the large gap between the second highest note, G, and the highest, C.) So indeed, these notes are all significantly higher than the standard G major tuning. Although it is not a hassle for me to retune this much, I have a lot of experience with the process, and I will caution that this retuning may be too much for someone in the early days of playing and retuning.

Francis Bebey was a guitarist, singer, songwriter, and kalimba player from Cameroon. Remember, Cameroon is close to the original birthplace of the kalimba – Gerhard Kubik (Austrian ethnologist famous for his African music study and collections) asserts that bamboo-type kalimbas originated there about 3000 years ago, and they are still made there today.

Francis Bebey often included a kalimba player in his band. This western African music used the kalimba very differently from its uses in southern African music. Contrasting strongly with western African style, southern African music’s karimbas and mbiras have well defined, long-established songs that a) have cycles with complex chord progressions, and b) the cycles are repeated over and over, and c) there are usually several different variations of the cycle that can be played to create changes in the intensity and feeling of the music.

In western African music, at least as exemplified by Bebey’s music, the kalimba often plays a fancy little solo at the start of the song, and then as the rest of the rhythm section comes in – the guitar, the bass, and the drums – the kalimba locks into a particular groove-based part that does not change for the rest of the song. This groove-based kalimba music is lacking variations, and it is generally lacking chord progressions. It is used much more like a drum, but with a few more notes. It forms a rhythmic/melodic pattern that every other instrument must lock into, and in a way becomes the backbone of the music.

Another key feature of Bebey’s use of the kalimba in his band: unlike Zimbabwean artists who tend to use the same mbira tuning for an entire performance (Thomas Mapfumo for example), Bebey’s band would have a different kalimba in a different key and different tuning with each song that used the kalimba. Most of the tunings were pentatonic, but the exact details of the pentatonic scales were different. This meant that Bebey’s band was able to make music with different emotional feeling for the different songs.

While it is a bit involved to accomplish the previous tuning (from G major pentatonic to F7 Bebey pentatonic tuning), this retuning (from G minor to the Eb7 Bebey tuning) is quite simple. Only five notes need to be retuned, four of them by only a half step. The C goes up half a step to Db, and the D goes half a step up to Eb. Also, the right-most note must be tuned up to Bb.

This tuning is the same as the F7 Bebey tuning, except that every note has been tuned down a whole step. What does that mean?

Let’s say you woke up (on your birthday) and started singing “Happy Birthday to Me” in a very low key – which is not uncommon in the morning. Later in the day, let’s say you were running down the street and nearly got hit by a car, after which you started singing “Happy Birthday to Me” in a higher key – which would be likely. The intervals between the notes will be the same for the two songs, and we can tell they are both “Happy Birthday” – it’s just that one is in a lower key and the other is in a higher one.

It works that way with the kalimba too. The Eb7 Bebey tuning will play the same music with pretty much the same feeling as the F7 Bebey-tuned kalimba, it’s just the Eb7 Bebey is pitched lower. The main advantage to pitching it lower is that it is easier to retune from any of the family of G-based tunings.

Mark Holdaway has been playing kalimba for over 30 years. He invented his kalimba tablature in 2004, and has been writing books and instructional materials for kalimba ever since. His business, Kalimba Magic, is based on the simple proposition that the kalimba is a real musical instrument capable of greatness. Mark's kalimba books are a down payment on this proposition.
PrevPreviousThe Definitive Collection of Traditional African Karimba Music
NextHow One Music Therapist Uses the Pentatonic KalimbaNext