I mark key root notes with different colors – and this works on other instruments too! 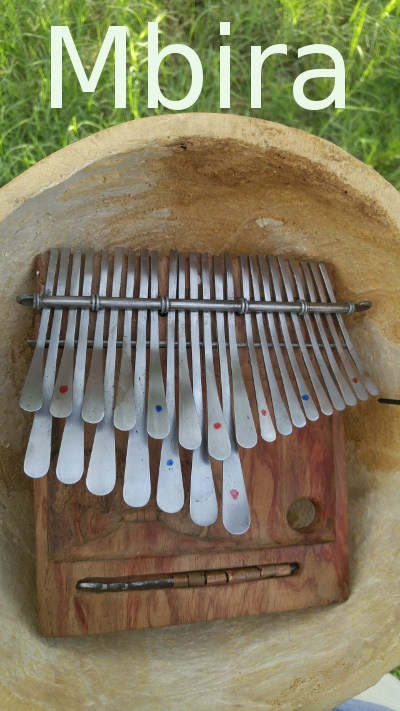 The mbira dzavadzimu is one of the pinnacles of the traditional African lamellaphones (thumb pianos), and its music is rich and sweet.  I consider the mbira and its music to be the highest intellectual wonder of ancient Africa.  And we can learn to play this venerable music today in our modern world.

I have a confession to make: while I easily picked up the kalimba and taught myself to play, I have had a very difficult time with the mbira.  I bought my first mbira more than 15 years ago, and while I tried many times, I could not even get started on this difficult instrument.

But something has changed, and I am suddenly progressing quickly on this instrument that eluded me for so long.

I am pleased to say that I have played mbira dzavadzimu (or mbira, for short) every day for the last two months.  I have overcome whatever was blocking me from progressing on this instrument – let us say that at last the spirits of the ancestors are smiling upon me.

Playing mbira will have a number of results for me and the Kalimba Magic community.  It will ‘Africanize’ my kalimba playing.  As I learn more mbira songs, I will produce more arrangements of traditional African songs for the karimba and the kalimba, along with my own variations of the traditional songs.  And I will share with you some of the secrets of my success on this difficult instrument.  Even though it is difficult, I am finding the mbira to be very worthwhile.

There are several books on playing mbira that utilize tablatures using numbers.  Each tine on a particular course of the mbira (lower left, upper left, or right) is numbered ordinally, and the song is taught by reference to those numbers.  A student (that would be me) is tempted to put those numbers on the tines with Sharpie markers.  However, while I did start out playing that way, I have actually done better with my mbira painted with the red and blue dots.

The various red dot tines are all B notes – there are B notes in four different octaves, and a 5th B note exactly doubles one of the other B note’s pitch.  Similarly, the different blue dots are all E notes, in three different octaves.  I find that I don’t have to think too much about this (dotted) layout, but I find that tines with numbers do leave me thinking too much. In mbira music, I aim to be getting away from thinking.  I aim to embed the patterns of this music into the depths of my brain and digits.  I aim to enter into some sort of dream world, where my body plays on its own.

By the way, this system of marking works on many different instruments – including harp, marimba, and kalimba.  I would mark the “1” and the “5” notes in two different colors to help you navigate the instrument.

Of course, I believe in the goal of eventually having no markings on my mbira.  I aim to be masterful enough in my music that I will be able to easily play a bare naked mbira.

Mark Holdaway has been playing kalimba for over 30 years. He invented his kalimba tablature in 2004, and has been writing books and instructional materials for kalimba ever since. His business, Kalimba Magic, is based on the simple proposition that the kalimba is a real musical instrument capable of greatness. Mark's kalimba books are a down payment on this proposition.
PrevPreviousHugh Tracey’s Field Recordings from Africa are Alive and Well at ILAM
NextPractice TIP: Progressive Sound Recordings of “Kuzanga” – an mbira songNext