What are these different note symbols, and how long does each one last?

In a recent blog post I described the the tablature as a map of the kalimba tines which shows you the right tines to play to accomplish a particular melody or song. If you are a newcomer to reading any kind of music, and find it impossible to know how to “see” tablature, or to know what the different symbols in kalimba tablature really mean, don’t despair.

This blog post is just for you – we talk about what the “tine map” means, look at the different types of notes and how long each kind lasts, and how to understand timing and how to keep time.  We help you make friends with this new language, showing you in tablature and in sound files exactly how to read and play the different notes.

When you look at the bottom of the tablature (that is specific to your kalimba), you see the shape of your kalimba’s tine ends, represented by the tab columns.  This is the map part. Each tine is labeled with the name of its note. To really be able to read tablature, you need also to see that it is a map in time.

The bottom of the tab is the beginning of the time map. Anywhere above there is later. Time runs from bottom to top.  If you look at the measure numbers along the right side of the tablature, you’ll see the “1” to the right, meaning “measure 1,” and the numbers increase as you go up the page.

Measures are little bites of music, marked off by horizontal bar lines. Measures are typically 3, 4, 6, or 12 beats long (other numbers are possible).  Each measure always gets the same amount of time, no matter how many notes are are in the measure. That’s just the way it is.  If there are fewer notes, each note tends to last longer.  If there are more notes, they each tend to go by faster.

The time signature is the fraction in the lower left corner of the tablature – in all these examples, the time (short for time signature) is 4/4 – the top number indicates how many beats are in each measure, and the lower number indicates which note gets one beat.  So in 4/4 time, there are four beats in each measure, and the quarter note gets one beat – and one way to fill a measure is with four quarter notes.  We’ll show you a few other ways. 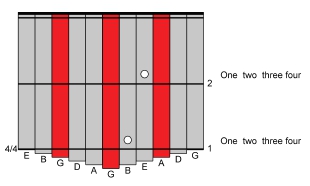 The language of musical notes uses accessories on a note to tell us what kind of a note it is and how long it should last. As a general rule, the less there is to a note, the more beats it gets. Those accessories include masts, beams (connectors), flags, and whether the note is hollow or solid. You will learn more as you go through this post. The whole note is a simple hollow ball (an empty circle) that sits on one of the tines, and it gets four beats, the same as a whole measure in 4/4 timing. A whole note fills up a measure and there is no room for any more notes. An important tip: If you count the beats in a measure (aloud or mentally), it will keep you from moving on too early and can help you play the notes correctly. In the tablature here, the counts are indicated to the right of each note. 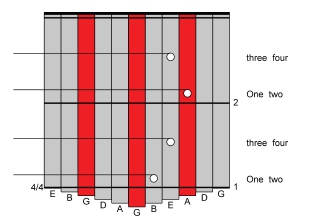 The half note is also a hollow ball, but it has a horizontal line going to the left, sometimes called a “mast”, though that makes more sense in standard musical notation, where the music is read across the page rather than vertically, and the mast is pointing up the way a ship’s mast does. Each half note fills half the four-beat measure – in other words, if there are four beats to a measure, each half note gets two beats, which can be seen in the way we count the measure, to the right of the notes. 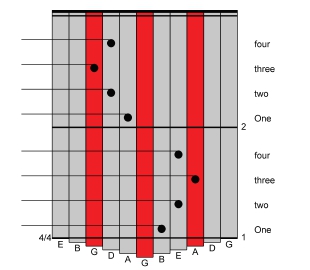 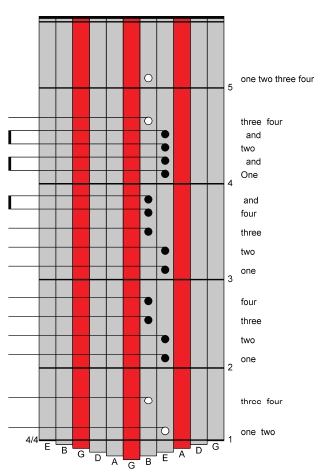 As two eighth notes one after the other will take up one beat together, when we count eighth notes, we need to subdivide the beat. We say “One and two and” – the “ands” are coming twice as fast as if we were just counting “One Two”. 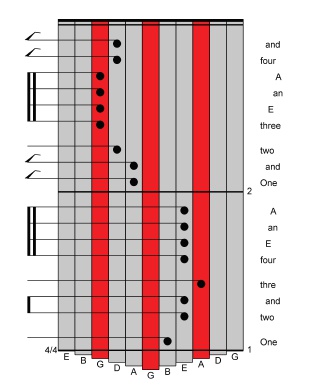 To count sixteenth notes, which are going by much faster than the “One two three four” beat counts, we subdivide the beat into four equal segments. We speak it “One – E – an – A Two – E – an – A”.

In measure two, there are two pairs of eighth notes with flags, but no connecting beams. They are still eighth notes just as are the pair on beat two of measure 1. More about this in the future.

We’ll come back around in the very near future and look at different time signatures, rests, dotted notes, ties, triplets, and syncopation.

Mark Holdaway has been playing kalimba for over 30 years. He invented his kalimba tablature in 2004, and has been writing books and instructional materials for kalimba ever since. His business, Kalimba Magic, is based on the simple proposition that the kalimba is a real musical instrument capable of greatness. Mark's kalimba books are a down payment on this proposition.
PrevPreviousThe System of the Mbira – Part 2
NextHave a Magical Experience Playing Kalimba!Next