I have known several people who only have the use of one hand, and two of them play kalimba. Kalimba Magic offers a special one-sided kalimba, either in a left handed or a right handed setup.

It seems you would need both the left and right hands to simulate the full kalimba experience. The theory is that the kalimba evolved from huge log xylophones, made from actual logs, which were played by at least two people, one on each side, playing interweaving parts. The kalimba plays those same two parts, but the two players who used to play on opposite sides of the xylophone, are both now sitting inside the player's head.

Yes, left and right hands playing interlocking parts is fundamental to the traditional, two-sided kalimba, but it is most definitely possible to play one handed kalimba and sound good. When you play the one-sided kalimba, you are playing something set up very differently from the two-sided type. The notes are laid out in a linear setup and are played using different rules.


"Feelin' Groovy" on the 8-Note Catania kalimba set up for the right hand.

The linear setup of the notes results in different types of chords. On a kalimba with an alternating note layout, adjacent tines will harmonize and make chords. But in the linear setup of a one-sided kalimba, chords are made by playing two or three tines, and you usually need to leave one or two tines in between the ones you play if you want the chords to sound good.

Exactly which notes should you play? That issue is solved in the diagram below. The first two measures indicate an ascending scale for the left-handed and right-handed 8-note kalimbas, and two and three note chords are shown in the subsequent measures. 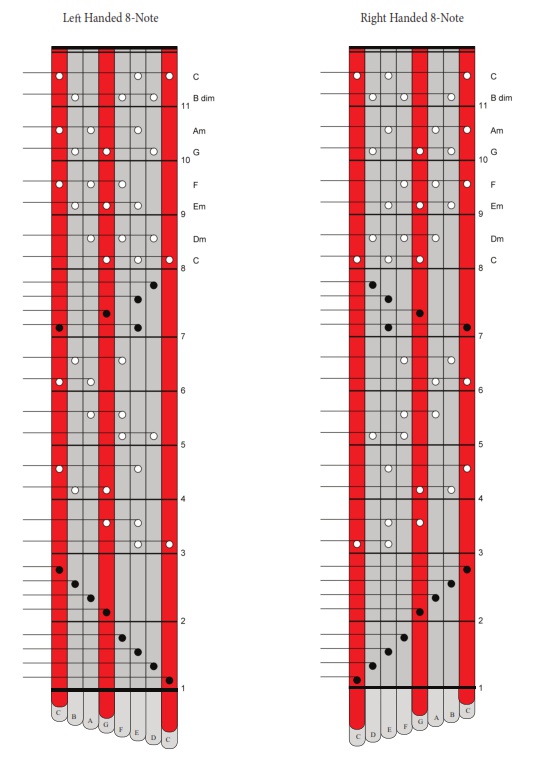 Unfortunately, 8-Note Catania board kalimbas - the one in the video - are no longer available. We have several 8-Note Catania Gourd Kalimbas, Hugh Tracey 8-Note kalimbas, and Goshen 8-Note box-mounted kalimbas. We can set up any of these kalimbas as a one-sided instrument. We still have a number of Catania 6-note kalimbas that can be set up in a one-sided way.