Happy Birthday! How would YOU like to celebrate? With 25% off everything? 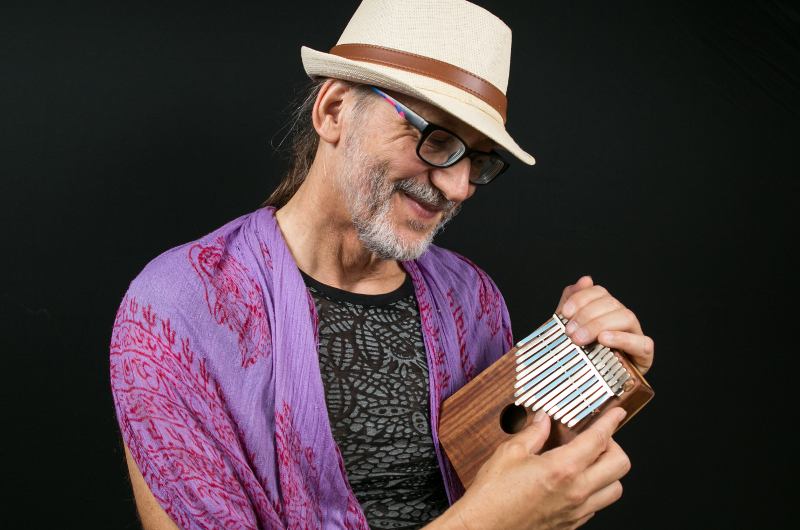 How the Kalimba Came into My Life

I remember the embarrassment shooting across my face like it was yesterday – about 20 years ago, I was playing kalimba on a bus. A certain man was listening intently, and we spoke a bit after I finished playing… and then he told me: “I bet you don’t make as much as a single solitary QUARTER playing that silly little instrument!”

I never saw him again, but if I did, I would tell him that for the last 15 years, I have made my entire living from the kalimba. The kalimba is already a sacred instrument – but to me, the fact that it is also my livelihood elevates it even more.

As I look back over the ups and downs of the first 15 years of Kalimba Magic, I must give the kalimba community a huge THANK YOU! Without you trusting in me and believing in me and my work, I never would have made it this far. Keep reading, I do have a special gift to give you at the end.

Kalimba Magic started in 2005 when Christian Carver of African Musical Instruments (AMI, the makers of the Hugh Tracey Kalimbas) called me up and asked me if I could help them sell their various instruments. I had just invented kalimba tablature, and I had started writing music for a kalimba book, and I knew I wanted to write several books – each different kalimba type needs its own book. And like BAM I realized what I would be doing for the next 20 years of my life! I made an initial order of 500 kalimbas, wrote my first book, and immediately I started selling kalimbas. It turned out that selling kalimbas was not nearly as easy as I had convinced myself it would be, but after investing all of my money in Kalimba Magic, I turned a profit after about 18 months, and I was off and running!

Then came the 2008 global economic colapse. There was a period in September 2008 were I sold exactly one kalimba in 21 days. I was a bit nervous, until I looked on eBay and discovered that every kalimba seller was selling nothing. Well, we were all in the same boat – eventually that boat would float again. Yes, we eventually did recover.

In 2011, there was a major problem with getting Hugh Tracey kalimbas. I totally ran out of most types of Hugh Tracey kalimbas, and I put out a message to the world: “Hey, buy the kalimbas from me NOW at 25% off… and I will send them to you in a few months when they arrive.” We shipped very few kalimbas for three months, but people kept on buying them anyway, knowing that they would be coming eventually. The kalimba world came through for me. I did not starve and I did not lose my house.

In 2015, my one employee, who was “on the spectrum,” moved out of his family house…and without the familial support, he could not get himself to work on time. On cloudy days he could not get out of bed, and I had to do the shipping myself. The entire month of December 2016, he never once showed up for work on time. When it became clear that he did not feel safe working in my home without having one of his guns – and I did not feel safe with him working in my home WITH a gun – I had to let him go. For most of 2017, I did all the kalimba building and shipping myself. My book writing went way down. But the physical work made me feel honest and fulfilled, and boy, did I rest well at the end of each shipping day.

Starting around 2017, several companies in China started to make reasonably good but very inexpensive kalimbas. Almost all are copies of the Hugh Tracey 17-Note Treble kalimba – painted the same way, but tuned slightly different. At first, it looked like Kalimba Magic might become irrelevant, and the superior Hugh Tracey brand might go extinct. What a shame that would have been! What did I do? I embraced the Chinese kalimbas. In 2018, I started to write instructional materials for the Chinese-made 17-Note kalimbas in C. I made sure to tell the story of the kalimba’s history, and how Hugh Tracey made his first commercial kalimbas in 1954. And we also started selling pretty good 10-Note and 17-Note C kalimbas from Height Musical in China. Not only did sales of these inexpensive “heart” kalimbas from China start to take off for Kalimba Magic, but also sales of the more expensive but superior Hugh Tracey kalimbas started to improve as well.

2018 and 2019 were my best book writing years. SInce 2005, I typically wrote three or four books each year. I hired Mike Ankomeus in December 2017 – he is a great friend and band mate in Baba Marimba, and he is great at building, tuning, setting up, and painting kalimbas. With Mike taking care of most of the shipping details, I could devote most of my time to writing books and ebooks. Over 2018 and 2019, I wrote 24 books and ebooks. One a month! What a ride! And these books then drove the newsletters. I have to say that I don’t like sending out newsletters unless I have something NEW – a NEW Kalimba or a NEW book or ebook. So in those years, I was also very happy to send out monthly newsletters to boast about all the new stuff I was putting out to the kalimba world.

And then in March 2020, the world shut down. For about a week, fears over another global economic slowdown caused my sales to dip to about $100 a day (ie, 10 ebooks a day, or 2/3 of a Hugh Tracey kalimba each day). But by then, I had the faith that we would get through this, together. And then something amazing happened: Christmas in March, April, May, June, and July. That is, my sales over recent months maintained the same level of sales I get each December when people are making holiday purchases.

So, that brings us through the past and into the present. What does the future hold for Kalimba Magic? For starters, we are redesigning the Kalimba magic website – expect some really cool new features before the end of the year. We will continue to bring forth some cool new kalimbas (like the Moon-10 kalimba), and we will keep exploring new kalimba tunings. And as always, more books and ebooks.

I’ve been learning to play the big 77-key piano, and I will be bringing that into my kalimba instructional resources in an amazing way that will help you with chords and improvisation.

And I am hoping to get outdoors and enjoy nature more in the future. I hope to have more photos and videos of me playing in natural settings around the southwest United States.

But first, we all have to get through this COVID-19 thing. Please stay safe so that you, too, get through. And a really good way to stay safe in these times? Stay at home as much as you can and play more kalimba!

Oh – and the coupon code, in case you missed it?

Coupon code “HappyBirthday” will get you a wopping 25% off between now and July 26 2020. That will save you 25% on kalimbas, books, instructional downloads, accessories, and CDs.

And if you ordered in the last week without using this coupon code and just discovered it now? Let’s compromise: I will give you a 15% rebate if you contact me on that.

Happy birthday! I must admit, I feel very blessed to have been sailing the ship of Kalimba Magic through the kalimba seas.

Mark Holdaway has been playing kalimba for over 30 years. He invented his kalimba tablature in 2004, and has been writing books and instructional materials for kalimba ever since. His business, Kalimba Magic, is based on the simple proposition that the kalimba is a real musical instrument capable of greatness. Mark's kalimba books are a down payment on this proposition.
PrevPreviousThe eight-fold Path to Kalimba Happiness
NextWhy Do Some Kalimbas have Upward-bent tines?Next